The Neverending Fray: Let's have some lawyer jokes, because why not 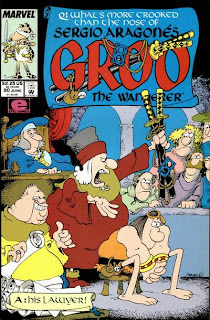 Lawyers: they're the worst, amirite? That's the general sentiment that leads to them being a perennial target of comedy anyway, and the Groo Crew seems to enjoy taking these sorts of hoary old jokes and filtering them through their Grooish sensibilities (I'll keep an eye out to see if they can work in some gags about mothers-in-law, or come up with a way to joke about airplane food or Gilligan's Island). They're such comedy pros that they can take any old joke and make it seem fresh and funny by throwing Groo at it and seeing what happens. And that's exactly what they do here, with our favorite wanderer being accused of destroying a town and put on trial for his supposed crimes. When an unscrupulous lawyer gets wind of this, he rushes to take the case, hoping to make a name for himself by defending such a notorious figure, and also planning to make himself rich by selling the rights to every conceivable aspect of the trial, from the written coverage to the sales of food, vegetables for throwing, and even merchandising: 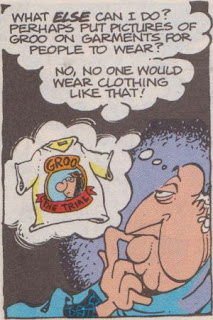 He's a pretty amusing character, the stereotypical ambulance-chaser who can't walk down the street without spotting an opportunity to sue somebody: 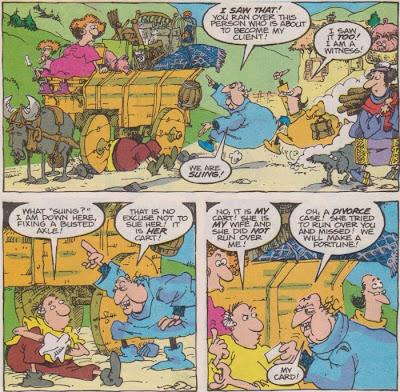 It's one of those over-the-top critiques of the all-too-familiar types who supposedly uphold the law, but actually bend and distort it for their own gain. Luckily, since he's trying to profit off of Groo, we know he's got a comeuppance in order, and the way it happens is an especially funny moment (never make the mistake of claiming Groo is incapable of destroying a town), and one that is highly satisfying. Yes, these guys know what they are doing, and no matter what topic you throw at them, they'll be able to make it hilarious. Even when I've read all these stories before, I'm excited to see what they come up with next.

This issue's stats:
Recurring characters: Weaver and Scribe get hired to chronicle the story of Groo's trial, and the puppeteers from issue #84 buy the rights to adapt the story into their medium of choice:

Sage also appears in a backup strip, and Chakaal is in the Groo-Grams header:

Hidden message: I knew they wouldn't be able to quit doing them. This lawyer has written "If we had a hidden message this will be it": 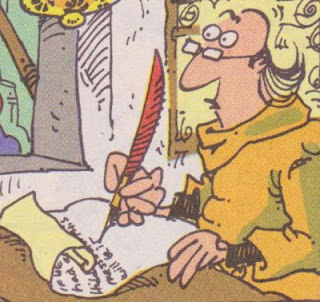 Moral: "Law is the best deterrence to justice."

Spanish words: Groo's lawyer is named Abogado, which means "lawyer", of course. The trial gets moved to the town of Caduca, which means "expires". The town of Flaca which Sage visits is named for the word for "skinny".
Running jokes: In addition to remembering to say that he is guilty, Groo recalls that he is the Prince of Chichester. It also takes him three pages (and a few days of story time) to respond to his lawyer calling him slow of mind. In the backup strip, Sage sneaks in a mulch reference while doing some farming:

Intro follies: Sergio decides to capitalize on the popularity of comics mini-series, declaring that this is the first issue of a lawyer mini-series (which ends on page 22), as well as a short Sage mini-series and a short Rufferto mini-series on the back cover. Also, Stan Sakai's daughter appears, and she's playing with a Usagi Yojimbo doll: 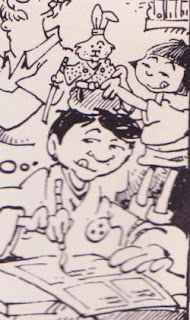 Value-added: This issue has another maze on the inside back cover, and it's a marvel of design, with the pathways of the maze surrounding the images on the page to look like pools of water, swirls of smoke, rolling hills, and trees: 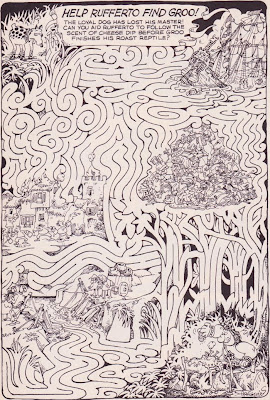 Mark Evanier's job(s): For the Defense
Letter column jokes: Nine-year-old Nina Pliska says people compliment her on being mature for liking Groo and asks how mature one has to be to like the comic. Mark (whom she had referred to as Zigfried) responds that they've had complaints from embryos that it was beneath them, and says that the real measure of her maturity is her ability to provide such good straight lines. Jason Hillenbrand sends in a numbered list of questions, including what he should do to get an autograph from Sergio (Mark: "Teach him to write"), what an appropriate middle name for his son would be if he named him Groo ("Doomed"), and how to get a letter printed ("Send in six pointless questions). Carlos Garcia threatens to rent and watch Hudson Hawk until he is bored to death if Mark doesn't print his letter. Jennifer Guilbeault writes in to note that Sergio was mentioned on "Jeopardy", in a "Newspapers and Magazines" clue that mentioned him being a cartoonist who scribbles in the margins. The answer was "What is MAD?", but she shouted "GROOOO!" (luckily, no one else was home). Mark responds by giving her a "Final Groo Jeopardy" clue: "A PROCESS OF INBRED FERTILIZATION WHICH EMPLOYS CERTAIN DECOMPOSED ORGANIC MATERIALS--INCLUDING BUT NOT LIMITED TO ANIMAL SEDIMENT--TO BLANKET AN AREA IN WHICH VEGETATION IS DESIRED". He then notes that she has written "What is mulch?" which is correct. Mike Parnell says that Mark keeps saying Groo is a stupid comic, but he's been reading since issue #21 and hasn't seen anything stupid yet. Mark replies that he hasn't seen his answer to Jennifer Guilbeault's letter yet. Somebody claiming to be Mark's mom and dad writes to say that they are proud of him, but if he doesn't print the letter, they'll make him finish his tuna casserole. Mark is confused as to why Donald Schuldt of Mokena, Illinois is sending their letters to him. Brian Anderson thanks Mark for changing the format of Groo; his reading enjoyment is diminished due to the increased number of story pages, but "the quality of the mulch produced from the new issues surpasses by far that from the back issues." M. Wayne Williams says that since the price of the comic has doubled, he can only buy every other issue, and asks that Mark print his letter in an issue he'll buy rather than one that he'll skip. Mark promises to print the letter next month as well to make sure he sees it (in fact, he went on to print it in every issue for a while, in hopes that Wayne would buy them all). Pat Reynolds asks what exactly it is that mark does besides interpreter, interlocutor, cryptographer, [every other job that has been listed for Mark throughout the series so far], and wrangler. Mark says he does all those things, and he also has to find someone to retype the letters for publication, which means Pat just made that part of the job much harder.
Posted by Unknown at 6:00 PM