Art What I Like: One Piece Is Awesome, Example #30

One thing that Eiichiro Oda does in One Piece that I like is the way he serializes goofy stories on chapter title pages, with them often starring villains that have been defeated in the past as they wander through goofy adventures and run into other supporting characters that have been encountered throughout the Straw Hat Pirates' adventures. Of the various stories that have been done as of volume 36 of the series, I think I've enjoyed "Wapol's Omnivorous Rampage" and "Django's Dance Paradise" the best, but the current one, "Gedatsu's Unexpected Life on the Blue Sea", is pretty fun too, seeing one of the bad guys from Skypeia fall to earth and join a random guy as they capture a giant mole, build a hot spring bath, and dig an undersea  tunnel from their island to Alabasta, where they meet up with Princess Vivi and a bunch of other characters from that story arc: 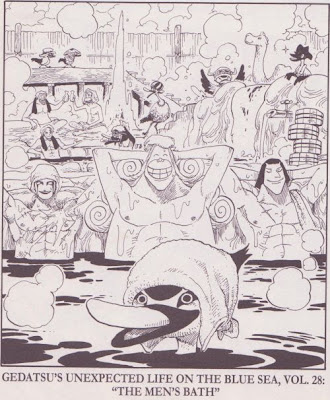 I don't know why, but that scene warms my heart, perhaps because we can see the happiness of people who had suffered so much before overcoming their oppressors with the help of the Straw Hats. Look, there's the Supersonic Duck Squadron, Eyelashes the camel, and even Pell, who we thought had sacrificed himself when saving the kingdom from a giant bomb.

However, the series ends on a great gag, with this apparent revelation of Gedatsu's status: 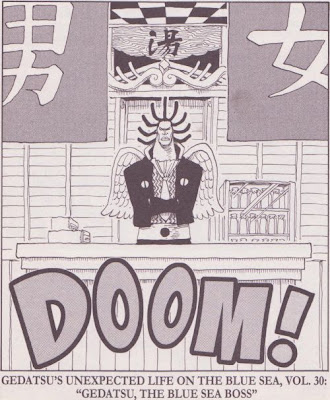 Followed up by this switcheroo: 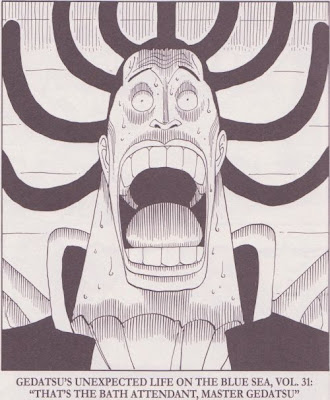 That's hilarious. Oda gets to include so much silly humor in this series, and he even manages to make it effective in single-panel moments like this that get spread across hundreds of pages. There's so much hilarity here, even when the drama is solemn and the stakes are high. I love it.
Posted by Unknown at 12:00 PM