The Neverending Fray: Groo isn't the only simple-minded one 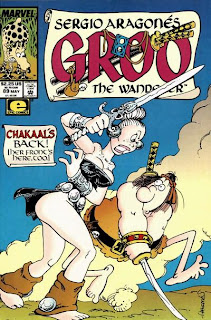 I suspect there's something of a generation gap between myself and the Groo Crew in some of the humor in this issue, with its many jokes about annoying flower-child cultists. I'm vaguely aware of the idea that Hare Krishnas used to hang out in airports handing out flowers to people, but as far as I know, that's never been something that has existed in my lifetime; in fact, most of my knowledge of the idea comes from this scene from the movie Airplane. Interestingly, Sergio and company create an equivalent location for cultists to recruit travelers: 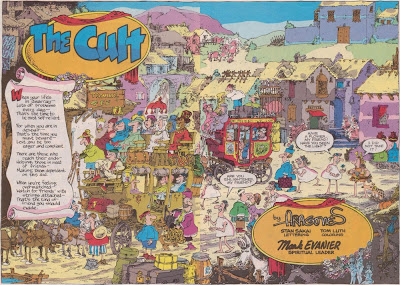 That's an odd bit of detail, with people traveling on carriages like plane passengers (the people inside the carriages must be in First Class), and I'm not sure it really works as a gag, but it's an impressively goofy idea for a joke about cultists. The rest of the story is similarly ineffective for me, since people being recruited and brainwashed by cults hasn't really been a big deal for as long as I can remember, but it works as an amusing situation to place Groo into, since he's so weak-minded that he would be a perfect recruit.

So: some people try to get Groo to rescue their sons and daughters from the cult that has brainwashed them, but he ends up becoming a member, so they send for some others to do the job. First is Arcadio, but he is just as easily swayed as Groo is. Then Chakaal comes to help, and she has no problems resisting their wiles. And after Rufferto figures out a way to break Groo's brainwashing, he joins his beloved warrior woman to take them down. And that's all. It's a decent enough story, with some amusing gags, like a cultist who is constantly pestering people for donations, but it's fairly lightweight as these stories go.

I did find this fight scene between Groo and Chakaal pretty interesting, since it's a rare case of Groo having an extended battle with someone who matches him in skill, rather than just rampaging through a group of goons: 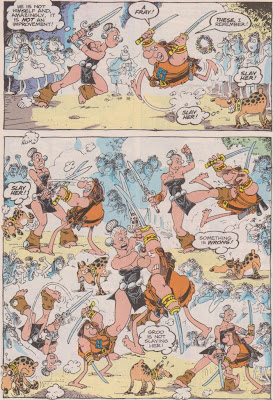 It's put together a bit odd, with a bunch of images jumbled together into one panel, and some of them are oddly awkward and non-kinetic, but I do like to see Sergio try something a little different from usual. Even with all the fighting that occurs, this isn't really an action comic, so it's interesting to see occasional gestures in that direction.

This issue is also notable for its use of the expanded page count; the Groo Crew seems to be trying to make sure readers are getting as much value as possible for the increased price. The main story is the standard, 22-page length this time around, but there are also two backup strips in the back of the issue and a couple of "activity" pages, along with the now-standard inside-front-cover intro strip and back-cover Rufferto comic. It ends up being a pretty full package, with lots of stuff to enjoy besides the regular tale of Groo getting up to his usual antics. These guys know how to keep the reader entertained; I know they've been doing it for me for most of my lifetime.

This issue's stats:
Recurring characters: Chakaal and Arcadio are in the main story, and Pal and Drumm and Minstrel are featured in backup strips. And there's a neat puzzle on the inside back cover that features just about every supporting character: Chakaal, Weaver and Scribe, Arba and Dakarba, Pal and Drumm, Minstrel, Taranto, and Sage: 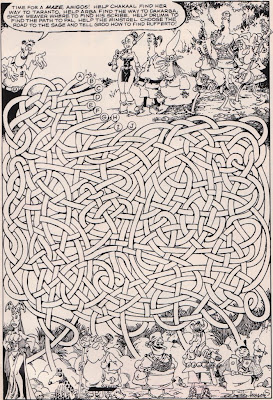 Also, Usago Yojimbo can be seen on the intro page: 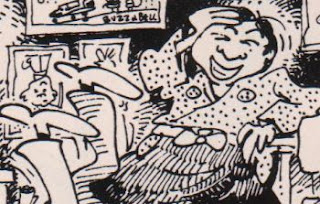 And I like this Groo-Grams header featuring Stan Sakai:

Moral: "The emptier the brain is of facts, the easier it is to fill with nonsense." Also: "The greatest monster of them all is ignorance."

Spanish words: None
Running jokes: Lots of people comment on the size of Arcadio's chin. Groo's brainwashing is defeated through his love of cheese dip, and he keeps asking Chakaal to marry him. He also says "Did I err?"
Intro follies: Now that each issue has an intro page, I think it's worth noting some of the jokes in those strips that star the Groo Crew. This issue, Mark asks Sergio why they haven't had Chakaal appear in the book, and suggests that it's because Rufferto is easier to draw, they might need to think of some new jokes, and that Sergio's wife doesn't like when he hires women to model for the character (which is probably an inside joke, since Chakaal's appearance is based on Sergio's wife). Also, Sergio insists that this is Groo #1 for some reason, which I think becomes something of a running joke.
Mark Evanier's job(s): Spiritual Leader
Letter column jokes: The letter column is expanded to two pages this issue, so there's a lot to cover, although I suspect I'm the only one who cares enough to go into so much detail. Alex S. Proctor asks where Groo's home is, and if Sergio's English is really as bad as his appearances in the intros make it out to be. Mark replies that Groo's home is the entire world that existed in his time period, but when that time period was is unknown, since Rolexes hadn't been invented then. He also reveals that Sergio doesn't really talk that funny, but his dialogue is Mark's way of getting back at him since Sergio draws Mark so unflatteringly. Rol Hirst offers the following suggested cast for a Groo movie:
Groo: Jim Belushi
Grooella: Roseanne Barr
Sage: Sean Connery
Minstrel: Chevy Chase
Arba: Cher
Dakarba: Danny DeVito
Pal: Al Pacino?
Arcadio: Arnold Schwarzenegger or Gerard Depardieu
Director: Francis Ford Coppola
Producer: Joel Silver
Jacob Huebert notes that Groo has been thinking and having ideas and showing common sense in recent issues, which makes him believe that Mark has kidnapped the real Groo and is keeping him in his closet. He says Mark will be hearing from the FBI, most of whom have subscriptions to the comic. Mark replies with surprise that the FBI reads Groo, and says that he can't wait to see the Oliver Stone movie about it. Apparently, the previous issue featured a pointless letter from Adam Hodgin, and Mark features another one this issue (which he had promised to do; he notes that they keep their promises, unless they're related to on-sale dates of graphic novels or the mailing of Grooism certificates), in which Adam says he was offended by Mark's behavior at a party and asks for his lawn mower back. Collin Nordman contributes a Grooism, in which his family was having a turkey dinner and his brother asked what animal turkey meat comes from. He threatens to throw cocktail wieners and tapioca pudding at Mark's house if he doesn't print his letter, but Mark says that he obviously doesn't know how much he likes cocktail wieners and tapioca, especially together. Greg Walpole offers a simple joke letter that replaces all the Rs with Ls because his "typewliter" is broken, but then he notes in a P.S. that the "lettel" is "handwlitten". Frisco Roque writes to offer a Grooism, but after a bunch of hemming and hawing, he can't remember it. Mark replies that it's okay, he forgot to send out any Grooism certificates. Nigel A. Warren sends a letter that just asks if Mark will be his friend, but Mark thinks that it's actually from notorious silly letter writer Kim Yeoman. He suggests Kim team up with Adam Hodgin in order to reduce the volume of silly letters that he's not going to print anymore. He immediately breaks that promise by printing a letter from Michelle Anatone that offers a ridiculous mathematical equation for determining Groo's level of stupidity (it involves the number of times Groo utters a catchphrase, the average amount of cheese dip he eats in a year, and the amount of phrases spelled incorrectly when Sergio is talking). Robert A. Thrash says he doesn't care what the thing on Groo's chest is or what mulch means, he just wants to see his name in a comic book. Mark compliments his honesty, then realizes that he included a P.S. in which he asked what the thing on Groo's belt is. Justin DeMonte submits a Grooism in which his sister's goldfish died and was buried in their yard, and when she later noticed that there were weeds growing on the grave, their dad offered to use some weed killer on them, but she didn't want it to seep down into the ground and kill her dead fish. Mark congratulates him for submitting the first Grooism about mulching.
Posted by Unknown at 6:00 PM