Art What I Like: One Piece Is Awesome(ly strange sometimes), Example #25

I love the goofy humor in Eiichiro Oda's One Piece; it can range from silly slapstick and wacky facial expressions to amusing wordplay. The latter is a common aspect of manga, and one that is often untranslateable into English due to the particularities of the Japanese language, but translators do their best to either make it make sense or find some equivalent gag that works. Here's an example (of a sort) from volume 32 of the series, in which the Straw Hat Pirates end up on an island called Long Ring Long Land, in which all the plants and animals are very, very long. This gives Oda a chance to play with some exaggerated artwork and perspective: 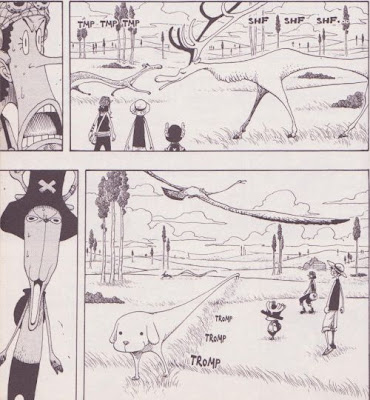 But the most amusing bit is when the island's sole inhabitant reveals the names of the animals, all of which are just stretched-out versions of their regular-size equivalents: 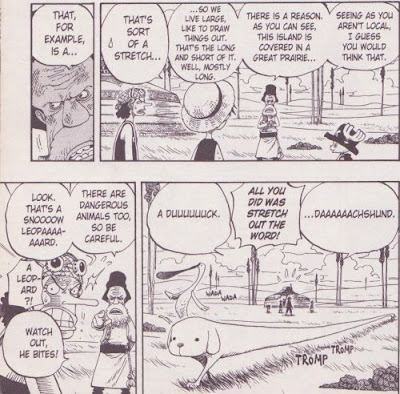 That's a silly gag, but it cracks me up. I'm curious as to how it works in Japanese and whether stretching out words by repeating characters is the same sort of joke, but whatever the case, it makes me laugh.

On the other hand, sometimes the language comes off as awkward and weird, and there's no way to translate it in a way that makes sense, so it's best to just leave it as is and let it seem bizarre. Later in this story, Luffy and company meet up with a crew of pirates who challenge them to a "Davy Back Fight", a game that pirates play in which the winners get to steal a member of the losers' crew and force them to permanently join the opponents' forces. Here's the explanation of where the term came from, from volume 33: 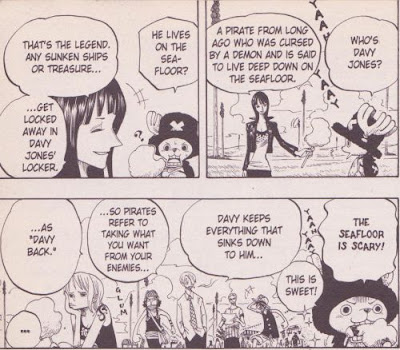 That makes very little sense, at least in English, demonstrating that sometimes it's just impossible to translate Japanese to English, so it's best to just leave something like this as is and let it seem strange. Actually, what's even more likely is that Oda chose some English words that sounded close enough to what he wanted to convey, making for an especially awkward second-generation loss of meaning when translated from English to Japanese and back again. But whatever the case, it's pretty enjoyably weird, and it fits into the bizarre, outsized, sometimes-nonsensical world that Oda has created. I wouldn't have it any other way.
Posted by Unknown at 12:00 PM