The Neverending Fray: Sometimes kids can be annoying 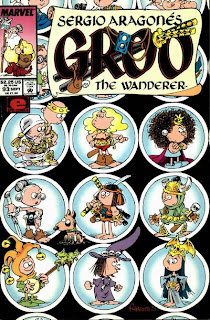 Well, as enjoyable as the initial installment of this two-parter was, the fun apparently couldn't last, since this second half mostly consists of wheel-spinning and characters undergoing arbitrary transformations, culminating in a complete non-ending. There are amusing bits, and it's still fun to see Sergio's depictions of all the characters in kiddie form, but it ends up being an anticlimactic end to the enjoyable setup of part one. What a shame.

We left off with almost all the characters having been transformed into children, and this issue sees the Sage trying to figure out how to get them all back to normal. He sends Groo to get an antidote from Arba and Dakarba's lair, but he doesn't know which potion is the right one, so he brings a variety, which leads to other characters undergoing strange changes, such as Grooella, who, upon hearing of her brother's diminutive stature, showed up eager to give him a spanking: 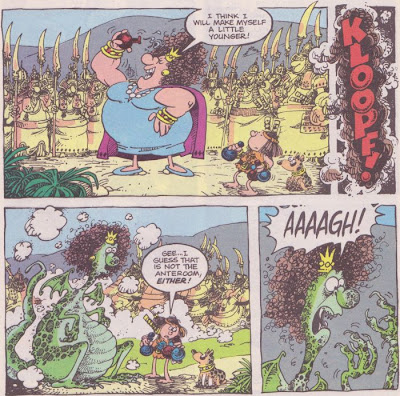 Chakaal also joins the chaos, and Groo turns her into a child so she can be his size, and then he ends up using the entire size-increasing potion on himself, turning himself gigantic. And that's the end, leaving the more continuity-obsessed among us all wondering how things got back to normal by the next issue.

As a story, the issue ends up being kind of unsatisfying, but issues of Groo always have something to enjoy, and this is no exception. I especially like that Groo is no less dangerous as a kid than as an adult, as we see when King Senil has his men detain all the children so he can find out the secret of their youth: 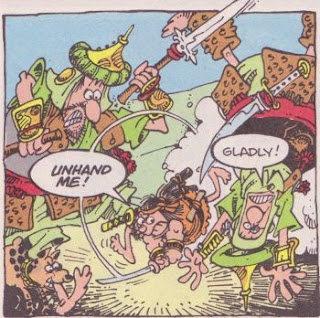 This gives us a nicely subtle moment in which a soldier considers attacking Lil' Groo and immediately thinks better of it: 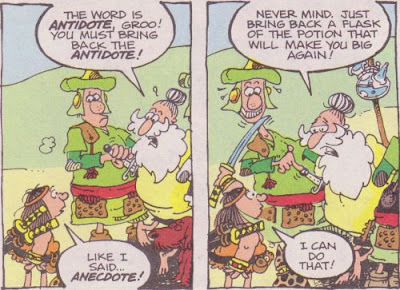 And along with the usual detail-packed settings and chaotic fights, the Groo becoming a giant makes for a nice moment: 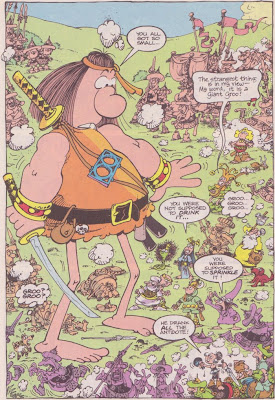 One would think the concept of this storyline would provide guaranteed laughs, and while that was true with the first part, the Groo Crew surprisingly failed to stick the landing. I guess they can't all be winners, but I'll always find plenty to enjoy anyway. Better luck next time, I guess.


Next: "Water"
-----
This issue's stats:
Recurring characters: Taranto, Pal and Drumm, Arcadio, Minstrel, Arba and Dakarba, and Sage, and Chakaal and Grooella make it into the issue this time. Also, kiddie versions of the Groo Crew can be seen on the cover: 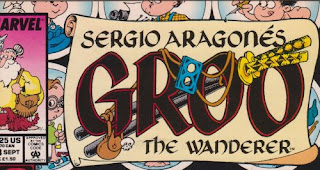 They also all show up in an amusing Groo-Grams header:

Moral: "As you search for youth, take care that it is not passing you by." And the moral of the Sage backup is "No matter how many times you explain the big problem, some people see only their small problem."

Spanish words: King Senil ("senile") shows up again.
Running jokes: The running joke for the issue is that when Groo is sent to fetch an antidote for the youth potion, he can't remember what he is supposed to get, and he substitutes a different sound-alike every time, including "anecdote", "artichoke", "antelope", and "antipasto". And Drumm doesn't ask "What pirates?" since he seems to have finally just started expecting them:

Finally, in the back-page puzzle, Rufferto bites a guy on the ass.
Intro follies: Sergio is still trying to be a superhero, and he says this is issue number one: 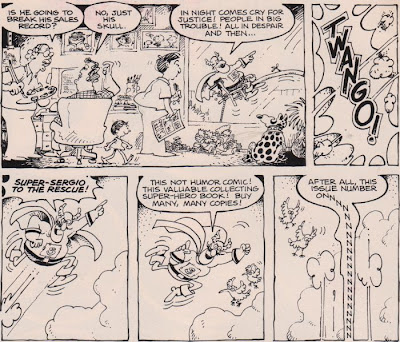 Value-added: The inside back cover has another classic puzzle: as spot-the-differences pair of images that has the potential to drive one insane (I spotted eight differences after looking for a couple minutes, but I'm sure there are many more): 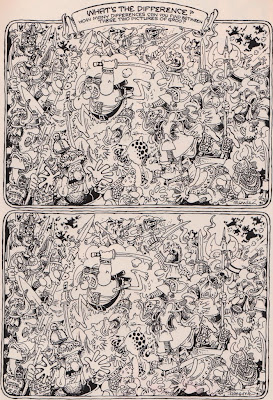 Mark Evanier's job(s): Working With a Cold, Getting Better
Letter column jokes: I'm not sure if it's a weird reference to the repeated reprinting of the M. Wayne Williams letter (which Mark reprints again this month, claiming that it's the last time he'll do so), but this month's column repeats Bob Heer's letter about monkeys and typewriters. Aaron Belisle contributes a good "print my letter or else" threat, claiming that if his letter isn't printed, he'll lock himself in a padded room and watch C-Span until the 1992 election, basing his vote completely on the issues. Daniel DeWitt asks a numbered list of questions, including how many lute tops the Minstrel has and how fast they change (Mark says it's an infinite number, and they change as fast as Sergio can draw them, which is pretty fast), whether he can have the Groo Crew's autographs (No, because that would mean they would need to learn to write), whether Mark has another job besides reading all these letters (he works nights proofreading M&Ms), and if Mark is bothered by all these questions. Regarding the last question, Mark says he is only bothered by the occasional hate mail, and then he provides an example from "Hatey Haterson of Hatesville, Hateland" that just consists of the word "hate" over and over. John Tudek asks Mark to do his gym homework (75 pushups) so he has time to read Groo, and Mark accommodates with hilarious sound effects, although he can't do more than four. Philip "Steve" Stephens complains that Mark screwed up when he printed a previous letter of his, spelling his name as "Stevens", and he demands that Mark reprint his letter, this time in either Pig Latin or Urdu. Mark apologizes profusely, noting that his middle name is Stephen and he is always correcting people who spell it with a V, so he complies and prints Philip's original letter in Pig Latin, and notes in his Pig Latin response that he's glad to get to use a computer program that translates English into Pig Latin, even if it annoys the typesetter. Stephen Graham complains that by naming the letter page "Groo-Grams", the Groo Crew is defaming his last name, so Mark says he'll change it to Groo-Stephens, but has second thoughts because it would provoke more angry mail fro Philip "Steve" Stephens, and he would probably misspell it anyway.
Posted by Unknown at 6:00 PM