The Neverending Fray: Not a drop 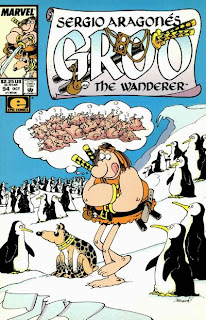 There's a bit of social commentary in this issue, regarding the way richer countries often exploit their poorer neighbors in order to acquire resources, with a bit of disgust at the decadent consumption of first world nations when those who aren't as well-off struggle to survive. That's a bit serious for Groo, of course, so it's not all that heavy-handed, but it's there, as our hero finds out about the country of Porciuncula, which has been hoarding all the water in the region so that it can enjoy luxuries like fountains and baths while people in surrounding villages are dying of thirst: 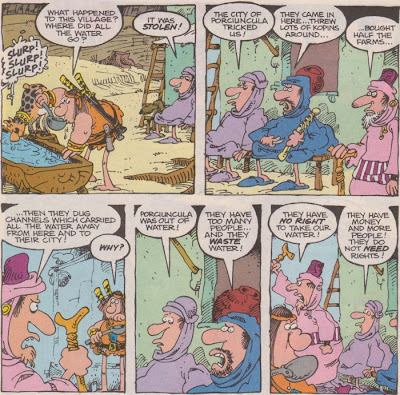 The king and people of Porciuncula are such jerks about their entitlement to whatever the please that one welcomes the idea of Groo getting involved with them, since we know he's going to screw things up for them. First, he ends up ruining a peace mission by charging into battle because he feels like it, but this actually turns out to be beneficial for Porciuncula when the potential ally surrenders to them. But the king is happy enough that he gives Groo more responsibilities:

Things don't go so well after that; first, Groo goes on a mission to bring back some icebergs, but he takes a shortcut through the desert, so the ice all melts. And for a final insult, he finds a source of water and has some workers dig a channel to deliver it to Porciuncula, but it turns out to be salt water. Wah wah wah! And so, we've got another example of why Groo should never be put in charge of anything. If only most of the people whose lives he ruined were so deserving.

The issue ends up being a decent romp, if not exactly an exceptional one, but there are some good gags, like the way the people of Porciuncula is so grossed out by Groo bathing in their fountains and baths: 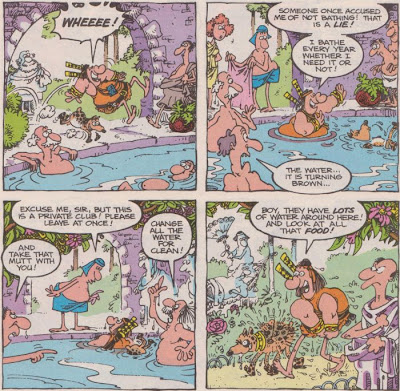 And I like this little joke in which a soldier is certain that Groo will be the death of him:

There's always plenty to see and enjoy in Groo comics, and this one is no exception. I'm feeling like there needs to be some sort of big shake-up though...


Next: We skip ahead to the big anniversary issue #100, "A Little Knowledge".
-----
This issue's stats:
Recurring characters: The Sage and Granny Groo show up in the backup strips.
Moral: "There is no solution to a problem of sheer greed."

Spanish words: The city of Porciuncula is named after either a city in Brazil or the former name for the Los Angeles River. The name of the town of Salinas spoils the issue's punchline, since it means "saltworks".
Running jokes: Groo has awful table manners, and he while he thinks "Did I err?,  he doesn't want people to think so, since it might ruin his reputation.
Intro follies: Sergio is still attempting to be a superhero, and he's still claiming this is issue number one: 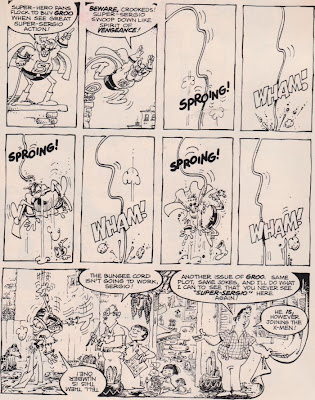 Value-added: Another puzzle page that makes use of Sergio's penchant for insane amounts of detail: 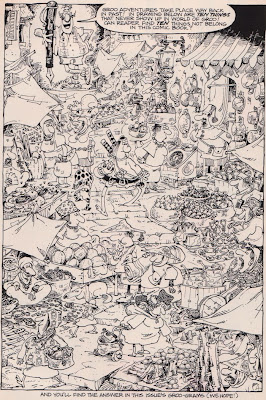 Mark Evanier's job(s): Healthy Person
Letter column jokes: Mark continues the odd trend of reprinting a letter from the previous issue with Aaron Belisle's threat to watch C-Span. After a dumb letter from Josh LaClane (he apologizes for a previous letter with a question that made no sense, and says if his letter gets printed, he'll get it bronzed and make duplicates for all his friends), Mark tries to find some serious letters to print. First up is one from William Bussard that simply says "This is a serious letter" but includes a P.S. that reveals that he was kidding. Diana Nossip reveals that she discovered where Arba and Dakarba's names came from (spelling "Abra Cadabra" backwards) and acts very proud of herself. Mark replies "Gib laed". Nathan "RiffRaff" Conner suggests the following (terrible) cast for a Groo movie:
Groo: Steven Seagal
Grooella: Roseanne Arnold
Granny Groo: "The woman in 'Mama's Family' with some padding" (Vicki Lawrence?)
Little Groo: Macaulay Culkin
Rufferto: "Spuds MacKenzie with some orange paint"
Arba: Cher
Dakarba: "The old woman in Throw Momma from the Train" (Anne Ramsey)
The Sage: Peter Falk
Mulch: Benjy
Grativo: "The guy whose name I forgot who played Judge Doom in the Roger Rabbit movie" (Christopher Lloyd)
Captain Ahax: Chevy Chase
Chakaal: "The woman in Terminator 2 whose name I forget but I think is Linda Hamilton" (it is) "Or, one of the American Gladiators. (One of the female ones.)"
The Minstrel: Dudley Moore
Arcadio: "Arnie Schwarzenegger, with longer hair"
Drumm: "Sly Stallone, with a lot less hair"
Pal: Christian Slater or Joe Pesci
Taranto: "The guy from 'Married...With Children'" (Ed O'Neill)
Thaiis: Darryl Hannah
Thaiis's short, hairy friends: The Muppets, or the McDonald's French Fry Guys.
And in an actual serious letter, Tony "Hambone" Smejek, an aspiring cartoonist, writes in to ask for advice about how to get his work published, and Mark tells him to draw everything he can for everyone he can, submitting work to whatever outlets he can find, even if they aren't very glamorous, and doing his best to be prolific. That's good advice for anybody.