Art What I Like: One Piece Is Awesome, Example #27

I'm rarely less than impressed (and often awestruck and/or dumbfounded) by the design work in Eiichiro Oda's One Piece, and the city of Water Seven that the crew enters in volume 34 is a case in point. It's a city built on canals and waterways running in intricate, multi-level configurations, and it's quite a spectacle: 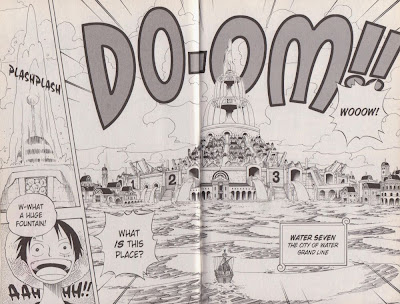 I often wonder just how much planning and architecture design Oda and his assistants do on settings like this, and whether they draw up full maps and mock up building designs, but at the very least, the illusion of a huge, populated city comes across on the page, making each new location we visit feel like a living entity full of people who just happen to get caught up in whatever high-stakes battle is going on around them.

Oda definitely seems to like this particular city design, so he jumps at the chance to demonstrate the scale of his creation in a scene in which a character traverses it via super-parkour: 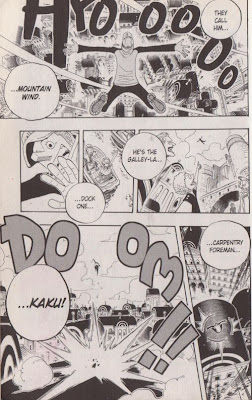 The sudden aerial view if the buildings and streets is breathtaking, another in a series of examples of how well Oda can convey a sense of scale. Whatever adventures are to come in this place (and there will be plenty, since the storyline stretches through at least volume 45), they promise to be exciting.
Posted by Unknown at 6:00 PM