Art What I Like: One Piece Is Awesome, Example #21

I'm often fascinated by the worldbuilding that Eiichiro Oda does in One Piece. The series isn't just an excuse to depict one fight after another; he obviously has a plan in place for the overarching plot of the series, and each new land that the Straw Hat Pirates visit feels like a fully-realized culture, with people from all walks of life included. In the Skypeia arc, there's an especially interesting conflict in which an island from the land was somehow blasted up into the sky and conjoined with a different island in the clouds. As we learn more about the situation, we find that the people from the land island (known as the Shandians) were driven from their home, and are fighting to regain the territory that once was theirs. What's especially fascinating about this is that Oda has based the Shandians on Native Americans, as we can see from this glimpse of their hometown in volume 27: 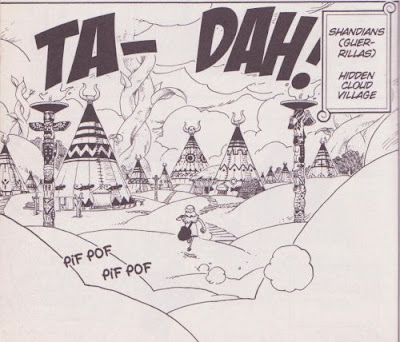 It's a bit of a stereotypical depiction, with teepees, totem poles, dreamcatchers, and feathered headdresses, but this is shonen manga, which isn't exactly known for its subtlety. But by making this obvious connection to a race of real-world people who have been oppresses and driven from their land by people who desired their natural resources, it gives the situation resonance and makes the conflict more than just a silly reason for crazily-powered characters to beat each other up. I'm not sure if Oda is trying to make any sort of social commentary with this series, but he's definitely got more on his mind than just action and adventure, and that's part of what makes this series so special. I think I might just keep reading it.
Posted by Unknown at 6:00 PM