The Neverending Fray: Youth is wasted on the young 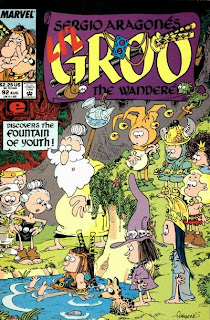 It's been a little while since we've had a guest star-packed story, so here's a fun one, taking all the regular supporting cast members and throwing them into what amounts to an excuse to depict them in super-cute child form. Just look at that cover! I love how Sergio makes the characters all so recognizable as themselves in their kiddie forms, managing to capture all the characters' personalities through their facial expressions and body language. That must have been a lot of fun to do.

As for the story itself, it's as convoluted as these affairs usually are, kicking things off with an elderly king offering a huge reward to anybody who can find the Fountain of Youth. Pal and Drumm get wind of this, and Pal comes up with a scheme to make money from the situation, recruiting Taranto and his men to make Arcadio, who has accepted the king's quest, think they found the Fountain before he did by dressing a bunch of kids up in Taranto's gang's clothes. But then Groo stumbles into the situation and is horrified at what happened to his "friend" Taranto, so he seeks out Arba and Dakarba to restore him to adulthood. And chaos ensues from there, as the witches decide to mess with everybody by concocting their own youth potion and turning various characters into kids, and then the fake Fountain of Youth water that Pal sold to Arcadio turns out to be the real thing, leading to a cliffhanger in which most everybody is stuck in child form, unsure what to do next.

I'm not always keen on the stories that pack in every possible supporting character, but this one is pretty enjoyable, at least as of the first installment, since it's pretty much total chaos, presenting a situation which is rife for amusement and then just having all the characters bounce off each other. There aren't as many straight-up gags as usual; instead, the humor is mostly character-based, with the humor coming from the way everyone interacts with each other. It ends up being an ideal use of the supporting cast, finding something for everyone to do and not sidelining Groo in favor of everyone else. We'll see if the trend continues through to the conclusion in the next issue, but even if it's unsatisfying, we'll still get plenty of cuteness out of the artwork, and that makes it all worthwhile.

This issue's stats:
Recurring characters: Most everyone: Taranto, Pal and Drumm, Arcadio, Minstrel, Arba and Dakarba, and Sage, and Chakaal and Grooella show up on the cover (and maybe next issue).
Moral: "Everyone acts their age...mental, if not physical."

Spanish words: King Senil is named for the word for "senile". A book on Arba and Dakarba's shelf is titled Brujas, which means "witches".
Running jokes: People remark on the size of Arcadio's chin. Drumm asks Pal "What pirates?" (and then asks it again later when child Groo suggests playing pirates) and gets excited to live along with a bunch of adopted orphans in the house Pal will buy him. Rufferto gets grumpy about Arcadio calling Groo his lackey. Groo doesn't specifically say "Did I err?, but he does think he must have erred. Drumm, thinking that the child version of Groo can't hurt him, calls Groo a "baby mendicant", but gets the expected result anyway after being turned into a child himself.
Intro follies: Sergio attempts to capitalize on the popularity of superhero comics: 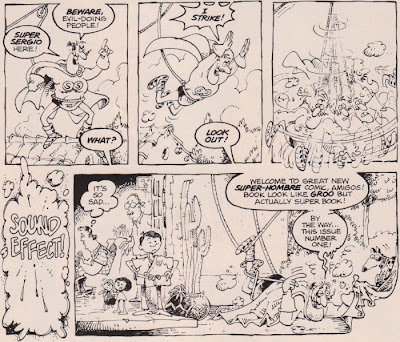 He also claims this is issue number one, and Stan Sakai's daughter plays with her Usagi Yojimbo doll.
Value-added: This puzzle page turns one of the massive piles of bodies that Groo regularly produces into a search-and-find: 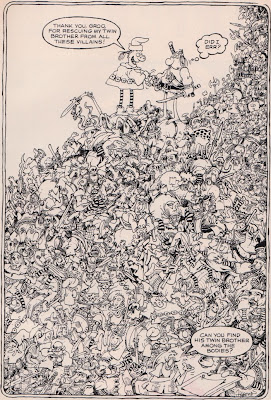 Mark Evanier's job(s): Baby Sitter
Letter column jokes: Bob Heer's repeats the common statement about an infinite number of monkeys reproducing the works of Shakespeare, but notes that along the way to that result, a lot of issues of Groo would be produced, with Groo-Grams included. Mark laments the lack of serious letters that he asked for. Chad M. Risen continues the trend by calling readers' attention to his discovery that reading Groo is highly detrimental to one's intelligence. As a solution, he suggests people send their Groo comics and memorabilia to him, and he will "hand-feed them into a shredder, dice the shredded strips of paper, bleach white the diced remains, and then proceed to destroy them by fire", which seems like overkill. Mark says he'll send along some of the crates of letters he has been receiving, especially the ones from Chad's hometown of Riceville, Tennessee, which seems to be where the especially pathetic ones come from. A pseudonymous reader from Miami, Florida submits a letter which consists of the words "prune danish" repeated over and over, which causes Mark to realize he was wrong about Tennessee. This also reminds Mark to reprint M. Wayne Williams' letter (in which he said he could only afford to buy every other issue and wanted to make sure his letter was printed in one he would buy) for the third time. A reader named E.J. complains that Mark never prints his letters, no matter how nonsensical they are. Finally, he offers to pay Mark 50 cents to print his letter, and Mark accepts. James Myers doesn't label his letter as a Grooism, but it functions as one: he describes finding the latest issue in the mail, then while reading it, wondering if his wife brought the mail in yet. Comic book artist Brent Anderson writes to take issue with the Groo Crew's portrayal of lawyers in issue #90, saying that they "are necessary in a free and democratic land where hitting is our sacred way of life." Mark chides him for not realizing that the comic is a work of fiction, and that everything in it is made up, even the characters on the first page like "Stan Sakai" and "Tom Luth". He says that the ending of issue #90 should definitely make Brent realize the comic isn't true, with a dumb ruling in a courtroom causing a rampage that destroys an entire city; that sort of thing just doesn't happen in the real world (note that the publication date of this issue is August 1992, meaning it probably would have been completed in May of that year).
Posted by Unknown at 6:00 PM