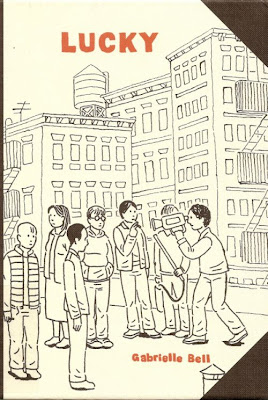 This is a pretty enjoyable book. It's a collection of three issues of a diary comic that Bell did. I'm not sure why, but I found this much more appealing than many autobiographical artcomix. Maybe it's Bell's skilled rendering of actual events. Maybe it's because it's a diary format, so it's less self-important than some autobio comics. Whatever it is, I enjoyed reading it quite a bit.

The book is divided into three sections, corresponding with the three issues of the comic that Bell published. The first issue goes day-by-day, for the most part, with each page chronicling one day's events. Sometimes there is an eventful day that fills two, or even three, pages. It's pretty interesting, covering the ordeals of living in New York, hunting for an apartment and a job.

In the second section, Bell loosens up a bit, reducing the panel count to four per page, and letting individual stories stretch for as long as they need. She also stops dating the stories, for whatever reason. Perhaps this change came about due to her losing her sketchbook in an airport and having to redraw it from memory. It's a good choice, and gives her more of a chance to show off her artistic chops, especially in a humorous story about her embarrassing turn in a yoga class.

The third section is the best, in my opinion, as Bell begins to fully take advantage of the four-panel format she started earlier. She starts to really flesh out her stories, and fill the panels with neat details. I love the background "noise" that she includes as she works assembling jewelry and contemplates the turns her life has taken. In another story (possibly my favorite in the book), she gets a job as an artist's assistant, drawing background details in her paintings (drawings?). As she works, she fantasizes about the artist becoming famous due to Bell's contributions. The fantasy gets more elaborate, as the artist offers to work with Bell, splitting the profits down the middle. Bell refuses on ethical grounds, but then she can't find work anywhere because everybody thinks she's just copying the artist's style. Funny stuff. Another story that I liked was one in which she gets a job as an art teacher to two French boys. I've included a panel from this story because I think it's a great representation of her abilities to show expressions using mostly body language: 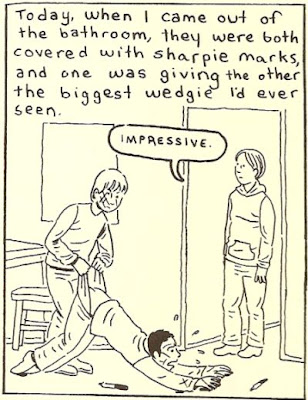 Bonus: I've included this story from the bonus section because I showed it to my wife, an elementary school art teacher, and she said it is a perfect representation of what it is like to teach art to fourth-graders. (Click to enlarge.) 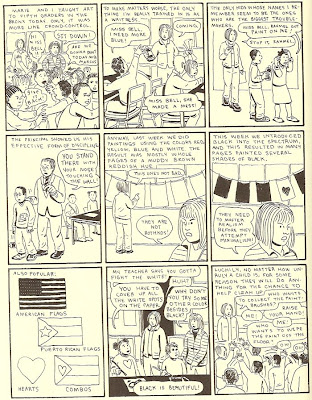