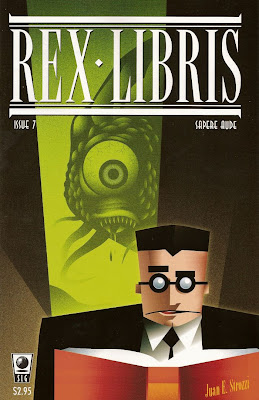 I've been meaning to talk about this book for quite some time. It's by the author of Nil: A Land Beyond Belief, which is a strange, satirical look at a weird dystopian future. It's hard to even describe. But anyway, Rex Libris is about an immortal hard-boiled librarian who works at the Middleton Public Library, a transdimensional collection of books run the the Egyptian god Thoth. The library is situated at an intersection of ley lines, so it's full of telluric energy, allowing lots of magical stuff to happen, like characters from books springing to life. Much of the first five issues of the series (which I might look at sometime) consisted of Rex's quest to get a copy of Newton's Principia Mathematica from an evil space tyrant who refused to return it. Very enjoyable. The writing is very funny, with Rex constantly spouting expository facts about whatever he's doing or about the threat he's facing. The art is quite interesting as well; it appears that writer/artist James Turner produces the entire thing on a computer. I'll give some samples so you can see what I mean.

So, this issue continues where #6 left off: Rex has entered a book called El Compendio Ilustrado De La Morfologia Del Monstruo Del Paleozoico Al Cenozoico Del Cryptozoologisto Internacionalmente Aclamado Juan E. Strozzi El Loco. It's a sort of encyclopedia of monsters, and it sucked a patron into its pages, so he has to rescue her. But some sort of buildup of telluric energy has caused the "page barriers" to break down, so all the monsters are running wild throughout the book. So he has to rescue the patron and fix the problem with the book before it breaks down and lets all the monsters out into the library. 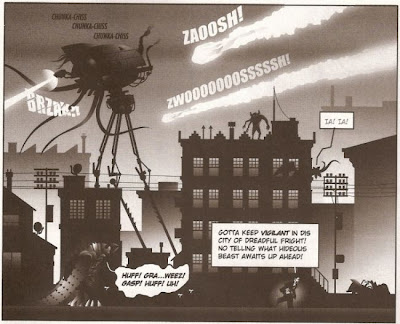 It's a very enjoyable read, and really dense. Turner fills the pages with lots of dialogue, most of which is spoken aloud by Rex to nobody in particular in true Stan Lee fashion. 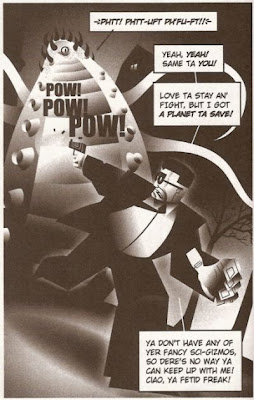 And there's some goofy fourth-wall breaking stuff too. At one point, Rex decides to take a break from the fight to have a conversation with his (fictional) editor, B. Barry Horst. He's done this before in previous issues; they usually argue over whether what's shown is really what's happened, and Barry usually tries to get Rex to add naked women to the story so it will sell better. But this time, Barry's office is empty, leading Rex to remember another story that suffered from the non-presence of an editor. Sure enough, we flash back to the previous story, in which Rex and a sherpa compare monster-hunting stories while stranded in a tent on a mountain in Tibet, where they are searching for the Yeti. We spend a couple pages while they talk before getting back to the story. That's the kind of humor Turner specializes in.

So, it's a really fun book. It doesn't come out too often, but hopefully a collection will come out sometime. In the meantime, watch out for spiky crab creatures! 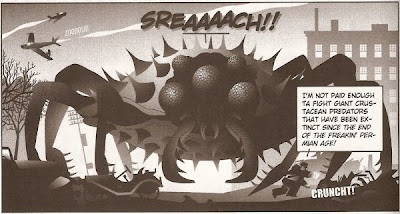