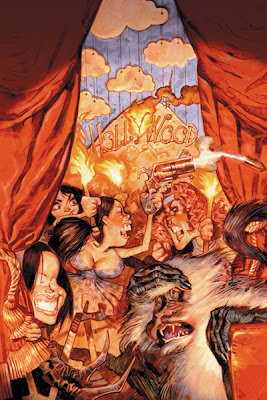 First, I wanted to say I love that cover. It's a bit zanier and more cartoony than the usual Y covers, but it's a good representation of the contents, showing the crazy world of Hollywood (with a touch of celebrity caricature art style). Plus, there's a monkey, which is always a good element to a Y cover, and an emphasis on the letter "Y", with the "Y" in the "Hollywood" sign burning. Cool.

The story's pretty enjoyable as well. It's got something I enjoy about the series: stories where Vaughan takes a break from the main characters and catches up with somebody that the gang has met during their travels. Last issue was another one, showing us the model/garbage girl from the first storyline as she dealt with the funeral of Yorick's mom. I don't know if we'll get any more of these stories before the series ends, but if we did, it might be interesting to see what's up with the Arizona militia, the Australian navy, the prisoners in Indiana (or wherever they were; I can't recall), or the news photographer in Australia.

Anyway, this issue is about the remaining members of the Fish and Bicycle theater troupe, whom we last saw around issue #19 putting on a play about a fictional (as far as they knew) last man on earth. They've graduated to Hollywood, making feminine action movies about fighting Amazons for leftover sperm, but all their actresses are getting discouraged and quitting. They do more of the usual philosophical arguing (which I always enjoy), get robbed by a gang of teenage girls, then discover a new medium for their artistic talents: comic books!

All in all, a good issue, but it will be nice to get back to the main characters next issue, which I think kicks off the final storyline of the book. Can't wait!
-----

More reviews tonight, hopefully, after I get home where I can use my scanner. Stay tuned!
Posted by Unknown at 11:49 AM