Time for a rant!

So, I was reading the latest issue of Electronic Gaming Monthly (EGM), when I came across this tidbit in the "Worst" section of their awards for 2006: 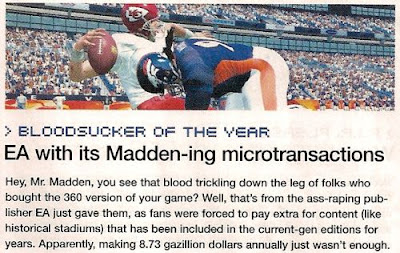 Wow. Do I really need a graphic rape joke when reading about video games? I rarely think rape jokes are funny, but throwing them into a comment about Madden is ridiculous. I mean, I can sort of understand if you're talking about an adult game like Grand Theft Auto, but this is a year-end wrap up, and you're talking about a football game! Ugh. This is the kind of thing that comics fans complain about all the time, with Wizard, and video game fans have to deal with the same thing. I'm glad I got a year's subscription to EGM for free (so I wouldn't be paying for this shit), but this is offensive enough that it makes me want to cancel. The thing is, I was hopeful that it would be pretty good. I used to read a magazine called GMR (that's "gamer" without the vowels), and it was really good, with smart, funny commentary and good reviews. It seemed like it was aimed at adults rather than teenagers. Sure enough, that magazine got cancelled (I think it had to do with the merger between the GameStop and EB Games stores; it's a long story). The easiest alternative was Game Informer, which you had to subscribe to for the discount program at Gamestop; I got that one for a while, and it was awful. "Too cool for school" writing; with the writers insulting the readers often; lots of lame, juvenile jokes; and just plain poor articles and reviews. I never renewed that subscription. Now, I ended up getting this EGM subscription, and I was hoping it would be better. I generally like the writing at 1up.com, the online component of EGM (along with a few other game-oriented magazines), but the print version is nearly as bad as Game Informer. Again, lots of stupid jokes about farts and boobs, and some stupid looks at gaming "culture". I do enjoy previews of upcoming games, and the review section is decent. But the thing is full of the kind of crap in the example above, and I'm sick of it. More of this, and I'll cancel my (free) subscription. Take that, EGM!
-----
End rant. Switch back to regular blogging mode...now.
Posted by Unknown at 5:57 PM