Actually, I never even watched that show, but a friend of mine has it on DVD, and for some reason it makes me laugh whenever I see it. Anyway, on to the links:

Vern, my favorite film critic, has a review of Ghost Rider up. I don't especially like the comic character, but the previews make the movie look fun, in a stupid way. But according to Vern, it's not even good in that aspect. Here's a quote in which he takes issue with the filmmakers not taking the story seriously enough:

"What I'm saying is you have to have the courage of your convictions. There are nerds all around the world, apparently, who like this comic strip, they take the burning skeleton stunt jumper guy with a spikey jacket seriously, and if they're gonna be filling your bank account you shouldn't make fun of them. And at the same time there are people like me who are going to the movie exactly because it looks so stupid, and we would rather see you take it seriously too because then it would be alot funnier than this bullshit. Treat it seriously and everybody wins. If you think the premise is too stupid to do with a straight face then for God's sake don't make the fucking movie, you assholes."

Good stuff. He also has a good review of Alejandro Jodorowsky's Holy Mountain, which I really have to see, along with El Topo.

CBR has an interview with David Petersen about his series Mouse Guard. The big news: the second six-issue miniseries starts in July.

Mitch Montgomery (who I know from the excellent comment threads on Geoff Klock's Blog) reviews what sounds like an awesome play called The Jaded Assassin. It sounds like a stage version of Kill Bill or Crouching Tiger, Hidden Dragon, and if I lived anywhere near New York, I would definitely go see it. Check out the promo image: 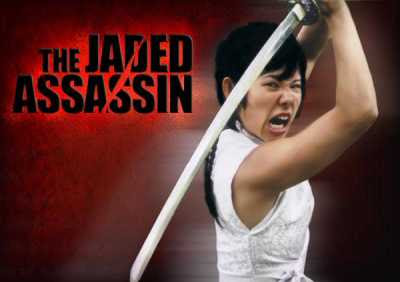 As seems to be the trend with these link posts, I'll add more as I find it, so keep watching!
-----

UPDATE: Yeah, I moved this post to the top of the blog again. Who cares about continuity? Not me!

Over at The Comics Reporter, Bart Beaty has a cool look at Why I Killed Pierre by Alfred and Oliver Ka. It was one of the prize winners at the French Angouleme festival this year. He's been discussing several of the winners recently (there's links in his post). Very interesting stuff.

A site called The Open Critic has a series of reviews of Hideshi Hino manga. Cool. (via The Comics Reporter).

Jim Mahfood painted the mural that can be seen in the coffee shop on The Sarah Silverman Program on Comedy Central. I've only watched a few minutes of the show, but if I watch it again, I'll be looking for this. Go Jim!
-----

Greg Hatcher offers a dissenting opinion on Ghost Rider (about halfway down the page), along with some other stuff.
Posted by Unknown at 9:47 PM