I know it's "bad blogger form" to lump several different topics together in one post, but hopefully my reasons for doing this will be made clear in tomorrow's post. Until then...
-----

I watched the most recent episode of Battlestar Galactica (3.16) today, and it was a doozy. Or at least, for the type of episode it was, it was very good. We're coming up on the tail end of season 3, and while the show had been in a bit of a mid-season lull, the last few episodes have seen a real rise in quality. This episode raised, or at least expanded upon, an idea of class-consciousness in the fleet, with people from poorer colonies feeling that they were doing all the crappy jobs, while richer types from Caprica were living it up in positions of importance. Hmmm, replace "poorer colonies" with "flyover states", and you've got one of the show's patented metaphorical looks at current events! But even without that aspect, I find it fascinating that the show looks at the social issues that would naturally come up in a fleet that is scraping by with little resources while fleeing a threat. I'm also loving Baltar's new role as a Karl Marx figure, smuggling out propaganda about "the aristocracy" and "the working class" from his prison cell. Great stuff! Next week looks to bring Kara back into the spotlight, and hey, it might even deal with Cylons, who are, you know, the big villain, even though they haven't been seen for like five episodes. I'll be watching.
----- 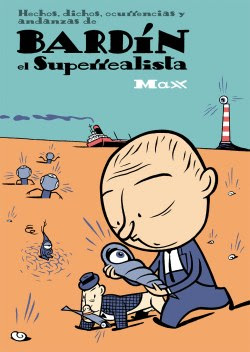 During the Oscars last night, I read the book Bardin the Superrealist, by Max, a Spanish cartoonist (I had to distract myself during all the speeches and boring stuff, or I would have torn my hair out). It's quite good, but really weird, with a lot of references to Salvador Dali and Luis Buñuel. I would have scanned and posted some stuff, but my wife took it back to the library before I had the chance (by the way, I want to thank her for picking up a lot of the stuff I've been reading lately; she's great). My favorite strip was probably the one paying homage to Dali and Buñuel's Un chien andalou, specifically to the scene with the slashed eyeball (I haven't seen that film, but I've heard enough about it to know the infamous scene). It's a hilarious strip; I laughed out loud at a panel featuring a funeral procession composed of walking eyeballs. Funny stuff. I also liked the various stories about Bardin confronting a pantheon of gods, with the primary god taking the form of Mickey Mouse, except with eyeballs for his head and ears (which kind of reminds me of Grant Morrison's Mickey Eye). I didn't really understand that stuff, but it was cool anyway. So, recommended, although keep in mind that I read it for free.
----- 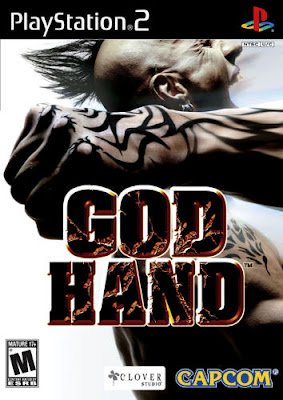 Finally, I wanted to comment on a new video game I bought, God Hand. I had heard that, while not a great game, it was enjoyably demented, so I picked it up when I saw it for fairly cheap. The game concerns a character who, as you might guess from the title, has the hand of a god, which he uses to beat up a lot of punks. So far, there doesn't seem to be much more to it than that, but in my limited play I've already come across a few examples of insanity: a poison chihuahua (it's green, and, uh, poisonous), a "kick me" sign that the girl sidekick stuck to the main character's bakc, and a couple of bosses who are very flamingly gay. They look like characters from the infamous Cho Aniki series, wearing midriff-baring, feathered, bethonged wrestling singlets and shouting lisped insults at you, calling you things like "brokeback cowboy." Wow. That's the kind of stuff I came for! (pun not intended). I'll keep you up to date if there's anything else in the game worth mentioning.
-----

Okay, that's it for today. Stay tuned tomorrow for a "special" post!
Posted by Unknown at 9:39 PM