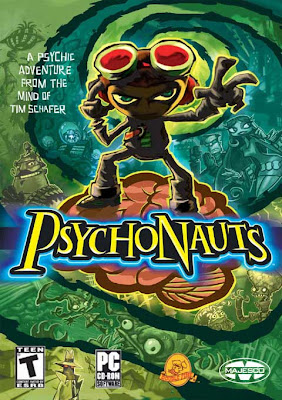 It's a really fun game, from, as the cover says, "the mind of Tim Schafer", who was the creative force behind classic adventure games like Full Throttle and Grim Fandango. I haven't played either of those, but I might like to try them out after the enjoyable experience I'm having with Psychonauts. I'm not sure how easy it would be to find them, let alone get them to run on current computer hardware. Well, it's something to consider.

Psychonauts takes the form of a "platform game", similar to Jak & Daxter or Super Mario 64. It takes place at a "psychic summer camp" which acts as a training ground for the elite force of the title. You play Rasputin (Raz for short), a young escapee from the circus who is a budding psychic. As the game goes on, you develop several psychic abilities, such as levitation, telekinesis, pyrokinesis, and clairvoyance (which allows you to see through other characters' eyes). It's tons of fun to use these powers as you explore the camp, but the real enjoyable part of the game is when you get to enter other characters' minds. This is where the creators really let their imaginations run wild, coming up with all sorts of crazy ideas for what people's psyches might look like.

The first "level" that you enter is the mind of Coach Oleander, an ex-military man who teaches "Basic Braining." His mind is like a war zone, filled with barb wire, explosions, tanks, aircraft, and other army paraphernalia. Next is Sasha Nein, a Psychonaut secret agent whose mind is very controlled, appearing as a near-featureless cube. That is, until an experiment goes awry and his subconscious chaotically explodes out from below the surface: 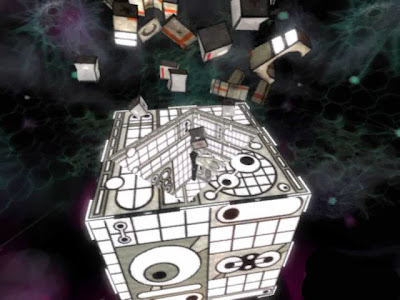 Then comes Milla Vodello, another secret agent who evokes mod 60's style. Her mind is like a giant dance club, filled with disco balls, TV screens, lava lamps, and go-go dancers. She refers to everyone as "dahling", in a Zsa Zsa Gabor accent. However, at one point you discover a room containing the memories of her children, who died tragically in a fire; it looks like the party-girl personality is a facade to hide her pain. That's good, subtle writing in my opinion. Especially for a video game.

Those levels mostly serve as an extended training sequence, allowing you to accrue psychic powers and get used to the game's atmosphere. Then the real plot kicks in: Someone is kidnapping campers and extracting their brains, planning to use them to control an army of psychic tanks and take over the world! So, you've got to rescue everyone and defeat the evil mastermind.

I estimate I'm only about a third of the way through the game, with a long way to go. So far, the game's been excellent, with some incredibly creative levels. When you discover the evil scheme, you have to fight one of the tanks in a dreamscape made of blueprints. When the tank locks onto you, it looks like a pencil has drawn a dashed line and arrow from the tank to you. Later, you have to enter the mind of a mutated lungfish (really!), and you become a Godzilla-style monster, rampaging through a cityscape filled with miniature lungfishes. It's hilarious. Another level has you entering the mind of a conspiracy-obsessed security guard (or is he a milkman?). It's a warped view of a normal suburban neighborhood, with the streets twisting and turning in different directions (and dimensions), and cameras popping out of every feature (bushes, mailboxes, fire hydrants) to keep an eye on you: 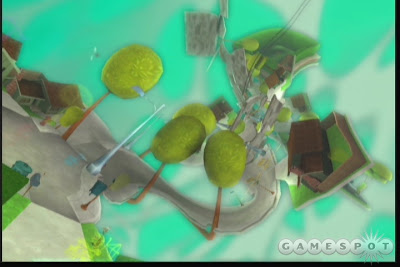 Plus, there are what look like spies everywhere, posing as workers. 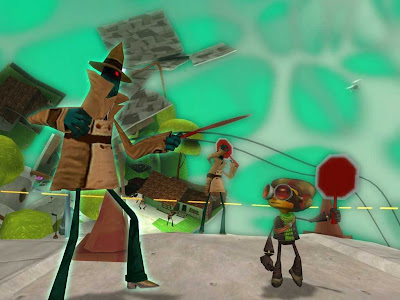 They crack me up, saying things like, "That woman's breasts are of above-average size," or "Although I often smell of excrement, I should not be discriminated against as I provide a valuable service," all delivered in a monotone.

So, I'm really digging the game. I'll be doing updates of future levels as I play them. Right now, I'm in an insane asylum, and there are three characters whose minds I'll enter next: an aging actress (like the lady in Sunset Boulevard), a man with a split personality (the second personality is Napoleon), and a man obsessed with bullfights. They should all be fun. Plus, there's an orderly whose mind I'll have to try to infiltrate. In fact, there's several minor characters who I could try that on; I wonder what will happen if I do? Well, I'll see. Stay tuned for more news of my exploits!
Posted by Unknown at 9:44 PM