In which cavemen and juvenile delinquents run amok

It's comics review time! Man, a lot of good comics came out this week. I probably won't get to all of them, so I'll start with some that I haven't heard a whole lot about, especially the first one, which I'm trying to get the word out about, because it's awesome!

(As always, click any pictures to make them larger if you want) 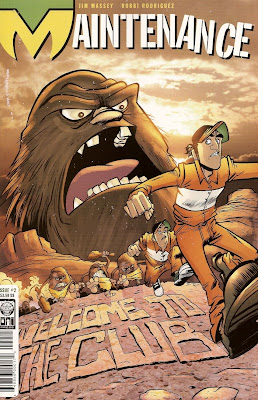 I reviewed the first issue of this series a few weeks ago, and I'm happy to say that the second issue is also very good. We open with our custodial heroes, Manny and Doug, in the lounge drinking coffee, where they witness what has to be a Black History Month moment: 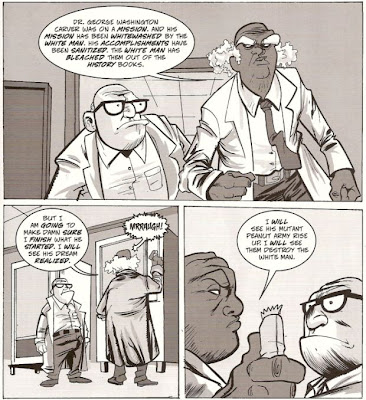 Hee hee. Then they go help repair a time machine for another mad scientist, and end up getting sent to the past, where they interact with cavemen who appear to be modeled after Captain Caveman rather than any existing fossils. It seems the professor with the time machine is bringing them technology, in hopes of training them as an army, which he can bring back to conquer the world. I hope I'm not giving too much away, but most of this is pretty rudimentary, a structure on which to hang gags about the uselessness of the technology to the cavemen and silly pop-culture references (Phoebe Cates? Really?). Here's a shot of the cavemen's view of the professor:

It's primitive comics! Anyway, I highly recommend this comic, especially if you like humorous writing, expressive and funny cartooning, and wacky plots filled with mundane details and goofy references. Check it out!
----- 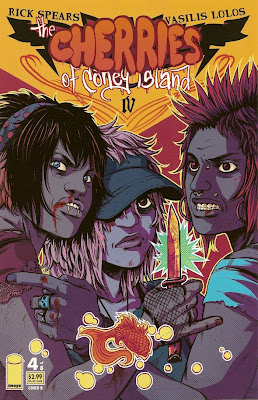 First of all, I love that cover. That's the Becky Cloonan-drawn variant. There's the way the Cherries have taken over the cover, drawing their name in graffiti over the logo. Then, in addition to the depiction of the battered Cherries themselves (note the blood and scrapes on the faces and knuckles), you can see one of the Pirates in the reflection on the knife blade, which has that cool "burst" around it to draw attention. And I like the fish at the bottom too. I thought it was just a design-y element, but it actually factors into the plot of the issue. Great stuff!

Anyway, this issue is a big fight scene between the titular Pirates, a gang of wayward youths on, you guessed it, Coney Island, and the Cherries a rival girl-gang. It starts out with a face off, in which all the gang members are identified in captions by their (nick)name and weapon, with the art showing them in close-ups. "Knievel, bike chain. Zeus, sling shot. Tats, brass knuckles. Black Jack, knife. Patch, a fucking pipe." I love that. Patch has a beef with Trish, the leader of the Cherries, for ripping out his eye in the first issue. So they fight (sending tourists scattering), and soon enough, mayhem ensues: 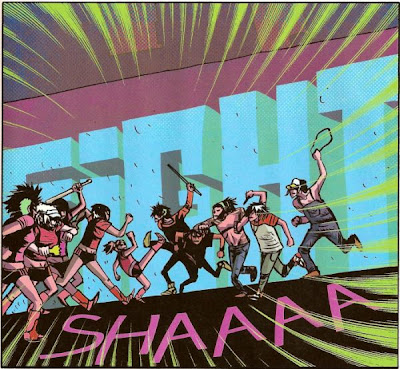 That's another great panel; I love the big 3-D letters for the word "FIGHT" in the background. Soon enough the cops show up, sending everybody running. They end up in pairs, with each Pirate chasing a Cherry; some pretty brutal fights ensue. It brought a (possibly stupid) question to mind: is this comic empowering or degrading to women? The girls are treated as equals, and they give beatings as well as take them. But [spoilers here] there's also some potentially degrading moments, like when Tats has Heather in a chokehold and her breasts slip out of her shirt. He gets a hard-on, which embarrasses and distracts him enough that she can whack him on the head with a metal bar and run away. When Zeus and Cleo, the youngest members of their respective gangs, are fighting each other, she apparently gets a crush on him and chases him while trying to kiss him (he runs away, terrified). When Darcy and Knievel are fighting, he hits her and knocks her down, and she starts crying. They both get embarrassed; she denies crying, and he apologizes, so she kisses him on the cheek and runs away. [end spoilers] I guess I'll ultimately say that I think it's okay; the characters act pretty much like teenagers, albeit cartoonishly violent ones.

So anyway, the fight ends (I won't say how), to probably be continued again in the future. I really dig this comic; it's full of energy, with some really fun, inventive art. I love the sound effects Lolos uses, stuff like "Doom!", "Grab!", "Vish!" (the sound of a bat being swung), "Clobber!", "Gdaf!", or "Ka-krunk!" There's even a "Yoink!", and this one, which isn't really a sound: 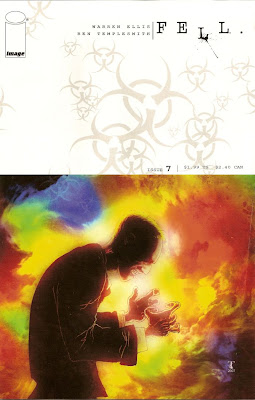 I've read some good reviews of the plot of this issue over at Comics Should Be Good, so I won't go into detail about that, other than to say I don't have a problem with it; in fact, I think it's a good depiction of Richard Fell's character (especially that last panel!). I mostly want to point out one or two cool thing I noticed in Templesmith's incredible art. First, I might be dumb for not paying attention to this sooner (or maybe I just forgot about it in the six months since the last issue), but I noticed that the white background "behind" the panels on every page has sort of a dirty texture applied to it. It's very subtle, and it adds to the dingy atmosphere of the book.
It's a pretty minor detail, but it shows the meticulous construction that goes into this comic. I like it. Second, check out this panel that shows a cop firing his gun:

It's a shocking moment, with the bright colors really standing out against the muted tones used in most of the rest of the book. It's so incendiary, the flash has washed out the black lines around the panel. You can't see it in the scan, but it even washes out the lines in the panels above and below this one too. That's a really cool detail. And finally, there's this panel of a guy suffering from drug-induced hallucinations: 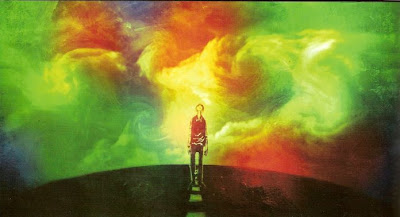 Again, note the bright colors. I love the way they swirl around him. The next page, which I didn't scan, is more hallucinations, and the panel borders on that page are all wavy and gray, rather than the sharp, black lines in the rest of the book. It's like the guy's world is dissolving. Very effective.

So, I recommend this book too, of course. There's supposed to be a collection coming out in April, I believe, so if you haven't looked at it yet, that will be a good chance to check it out. Enjoy!
-----

That's all I'm going to do tonight; I'll try to do some more comics reviews for tomorrow. See you then!
Posted by Unknown at 7:54 PM