Wow, it is hella cold today. Plus, it's snowing like crazy. The upside of this is that my office closed early, so I got to come home ahead of time. Nice! Then, I figured I would have to shovel my driveway, but I found that a neighbor had already gone over it with a snowblower! What a swell guy (or girl)! Anyway, the extra time means I'm finally going to get to some reviews I've been meaning to do. So here we go! 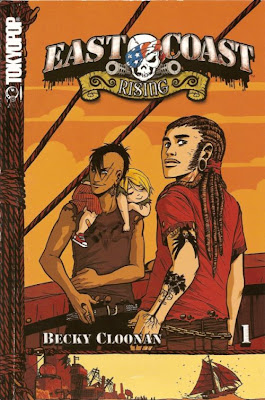 I'd been wanting to get this ever since I saw it; I've liked Cloonan's art everywhere I've seen it. Plus, it's a post-apocolyptic pirate story! With sea monsters! Looks awesome, right? Well, luckily it lives up to its premise, with a hip cast of young, punk-styled pirates and seafarers struggling for a treasure map in the deadly seas of New Jersey. This being after an apocalypse (of unspecified nature), most of the east coast of the United States seems to be underwater. The book starts off with a bang (literally!), when some pirates sink a ship to get the treasure map that a young man has. They're riding on these giant prehistoric-looking turtles: 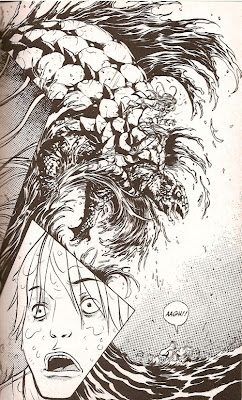 That's pretty awesome. The leader of the pirates, Lee, steals the map, which is in a bottle on the kid's (we find out later that his name is Archer) belt. But then he's saved in the nick of time by the intrepid crew of La Revancha, a trading ship. These are the good guys of the story, led by Cannonball Joe, the peg-legged captain (He's on the cover up there, with the dreadlocks). Archer is taken on board as one of the crew until they can drop him off, but the action starts again soon, when they decide to get the treasure map from the pirates. I won't give away the rest of the story, but it's pretty damn action-packed, with a large portion of the book dedicated to their fight with a giant octopus with a skull for a head. Cloonan's art is incredible here, with expressive characters and imaginative, dynamic panel layouts. There were one or two instances where I had a little trouble figuring out what was supposed to be happening, but that was pretty rare. Usually the action is very clear and easy to follow. This being in the category of "OEL (original English language) manga" and published by Tokyopop, it takes a few of manga's visual idioms, like super-deformed characters, those little veins that pop out of character's heads when they're irritated, the "starry-eyed" look, and angular panels rather than the usual rectangular layout that American books normally employ. It's pretty effective, and I commend Cloonan for her excellent use of these stylings. I can't wait for future volumes to come out!
----- 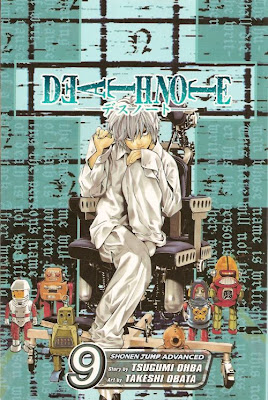 Man, this series just keeps getting better. I kind of went over the story of the series in my review of volume 8, so read that if you want a series recap. In this volume, Light sends his crew up against Mello's men to get the Death Note back (one of them, anyway). Then he starts to take over the world, as world leaders, fearful of being executed by Kira, start to kowtow to him. Of course, nobody knows Light is Kira, but Near suspects it. More battles of wills! And I totally want this playhouse that Near has: 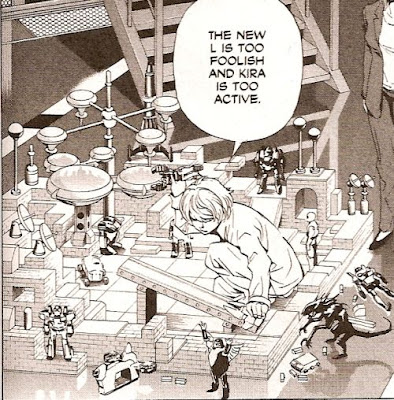 The "next volume" blurb says that Light is going to give up the Death Note again and start working through some follower of Kira. I hope they don't go the route of having him lose his memory as part of a serpentine plan again. We'll see. I'll definitely read it. This series is great!
-----

Sgt. Frog volume 12
by Mine Yoshizaki 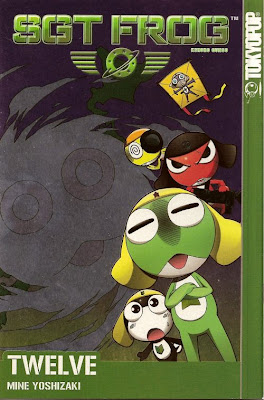 I've been following this series since the first volume, but I think this one will be my last. It's a fun series (I'll have to do a series recap or something sometime), but I think it's run out of steam. The premise is that Keroro, a froglike alien, and his crew are on Earth (or Pokopen, as they call it), planning to invade and conquer the planet. However, Keroro was "captured" early on by the Hinata family, so now he lives with them, doing chores to cover his room and board. He was eventually joined by four other aliens, and they often hatch crazy invasion schemes that are usually foiled by the Hinatas. It's been pretty enjoyable, with much of the humor coming from Keroro's lazy nature; he'd rather sit around reading manga and building Gundam models than do the work of invading. The problem is, 12 volumes into the series, I think Yoshizaki has run out of ideas. In this volume, the cast deals with a big typhoon that's approaching Japan, grows a large watermelon, takes a bath together (?!), takes care of Keroro when he's sick, and has a jump rope competition. Not a lot of invading going on. There's a two-part story in which a weird shapeshifting alien shows up and attacks the cast, but is eventually defeated. It turns out to be way to bring in a new addition to the cast, an alien girl who will go to school with the Hinata kids. The stories just don't seem especially inspired, or as funny as they once did. So, unless I hear that the next volume is the best one yet or something, I don't think I'll be buying it. It was fun while it lasted.
-----

By the way, I've watched some of the anime version of Sgt. Frog by downloading fansubbed episodes, and it's hilarious. I think it's being released on DVD in the US, so I recommend it whenever it does come out.
Posted by Unknown at 4:16 PM