Yeah, I'm always late getting to these, but here's stuff I wanted to comment on from comics that came out last week: 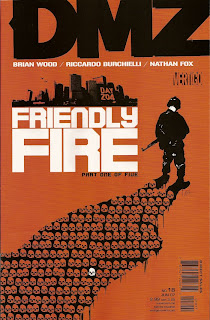 It seems Brian Wood isn't going to give us a breather between the last intense storyline and this new one. This is the first part of a new arc called "Friendly Fire", and it sees Matty leaving the DMZ to interview soldiers involved in the infamous "Day 204 Massacre", an incident in which a large number of civilians were killed. I think it was Joe Rice at Comics Should Be Good who posited that this seems to be a riff on Rashomon, in which we'll see conflicting accounts of the events from the point of view of different participants. That seems likely. In this issue, we hear from a U.S. Army soldier who describes his experiences in the war. The flashbacks are illustrated by Nathan Fox, who I've never heard of, but he seems to be channeling Paul Pope. Check out this shot of Stevens (the soldier) and a friend huffing paint before he went off to the army: 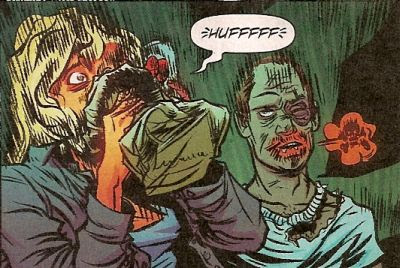 Excellent colors by Jeromy Cox in that scene. Everything seems so dark and drab, but the characters' whole heads seem to light up and almost catch on fire when they're breathing the fumes. Later we see some of the war from a ground-level view, and it's truly harrowing.

By the time the day of the "massacre" rolls around, Stevens is completely fucked up from stress, cold, and sickness (and possibly drugs), and he's hallucinating, seeing things like blood all over the ground:

Again, Cox makes the bright colors stand out against the drab background (which I didn't show; sorry). Incredible. So the worst possible thing happens, causing a huge setback for the U.S. forces. Of course, this is just the word of one guy, so we'll see what others have to say in future issues.

Once again, Wood really hits us where we live when depicting the consequences of war. If (or when, really) something like this happens in Iraq, we will think it's horrible, but not worry too much about it because it's half the world away and happening to foreigners that we don't relate to. But what if it happens on the streets of New York City, to Americans? It's horrifying to contemplate, and it knocks the wind out of you because that's what it's like for people in real war-torn countries. That's why I think this is such an important book, and one of the best ones currently coming out.
-----

The Spirit #5
By Darwyn Cooke 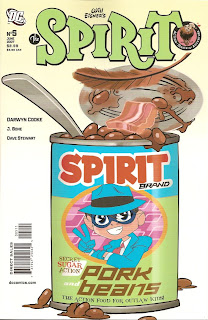 Ah, something light and fun to cheer me up! Darwyn Cooke makes The Spirit light and fun, and this issue is no exception. A weirdo named Carrion (whose amorous leanings toward his pet vulture have already been well-documented) is releasing addictive, sugary pork and beans and using the Spirit as a mascot!

Cooke's send-up of kid-targeted advertising is hilarious, but the real surprising thing about the issue (besides the aforementioned man/bird love) is the level of violence. While this book is lots of fun, it's definitely targeted toward adults: 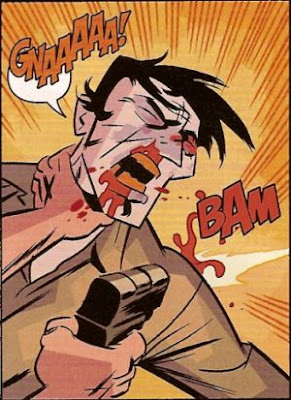 But hey, I'm fine with that. It's just not really a kid's comic. Teenagers might like it though. Anyway, not much else to say (except to wonder what happened to the original cover), so I'll just end with "Darwyn Cooke is keeping the spirit of comics alive!" Sorry, that was lame. Anyway, I dig this comic and will definitely keep buying it.
----- 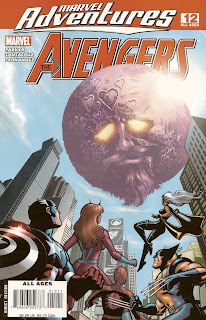 This is another one that's gotten some play on comics blogs, and deservedly so. Jeff Parker has been spinning some incredibly fun stories in this series, using well-known characters and portraying them with actual personalities. Spider-Man is jokey and obnoxious, Wolverine has a short temper, Hulk always wants to smash stuff, Iron Man is always ready with the gadgets, and Captain America is always in control of the team. It's great fun. But that's not what everybody is so excited about here; the real draw is the wacky concept of Ego the Living Planet showing up to hit on Earth. His lines are hilarious, like he's trying to pick up a girl at a bar.

Iron Man, being a bit of a player himself, seems to relate: 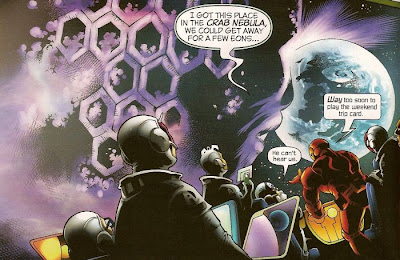 Oh, Parker. You aim to please, don't you? Anyway, the heroes drive him off, of course, in a sufficiently humorous manner. On the way, we get scenes like this: 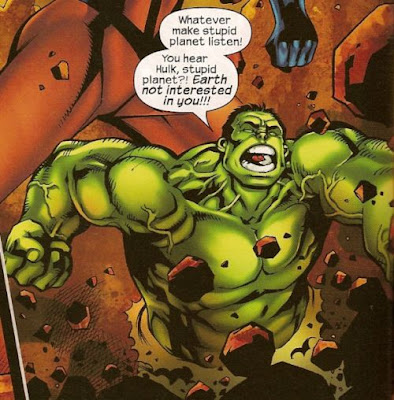 That's some funny stuff. It looks like I'm on board this comic as long as Parker is writing it. Well done, Jeff!
-----

Okay, it looks like that's it for this week. I thought about talking about Army@Love, but I didn't really have anything to say that I didn't already say about the first issue. Although I did love the bit where the hippy guy controlled an air strike by playing an awesome guitar solo. And it was interesting to have some of the background explained, including the idea of middle management personnel and advertising executives being conscripted to sell the war to the "extreme"/"Girls Gone Wild" generation. That's a stroke of genius on Rick Veitch's part, and I hope the government doesn't steal that idea. Huh, I guess I did have something to say about the issue. Whatever the case, I can't wait until the next issue.
-----

I expect to have more comics reviews up soon (that is, within the next couple of days); check out the "Currently reading" section of the sidebar for a hint of what they might be.
Posted by Unknown at 4:35 PM