Ode to Kirihito: Don't confuse this with "Ode to Joy"

I've been a little writer-blocked about this one, but I'm just going to knuckle down and talk about it:

Ode to Kirihito
By Osamu Tezuka Osamu Tezuka is known as the "godfather" of manga, and from what little of his works I've read, I can definitely see why. He was a master of the form, creating exciting, artistic comics that are exciting to read. He covered a wide variety of genres, and Ode to Kirihito was an attempt to do a story for adults. It's a medical thriller, but there's also sex, violence, globetrotting adventure, corruption, religion, and romance.

The plot and cast of characters are pretty sprawling, but it's basically all about a weird malady known as Monmow Disease which seems to transform people into a dog-like form. They grow hair all over their body and their bones warp, giving their faces canine features. The protagonist, a young doctor by the name of Kirihito Osanai, gets sent to a small village in Japan where this disease seems to be prevalent; he's supposed to see what he can find out. We learn that his superior, Dr. Tatsugaura, plans to present a report on Monmow at a large medical conference, in hopes that it will get him elected as the head of the Japanese Medical Association. Kirihito ends up contracting the disease himself, and he spends much of the book struggling with the implications; is he a man or a dog? Does he belong in society any more? Does he deserve the fear, scorn, and laughter that are now directed at him? And check out this freaky depiction of his mental state as he's going through the initial transformation: 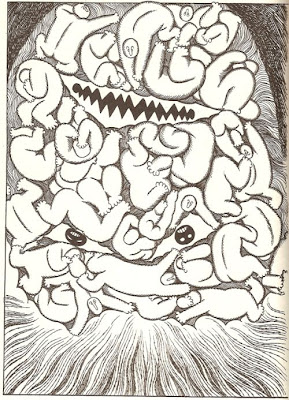 While trying to escape from the village, he ends up being captured and sold into a freakshow run by a rich Taiwanese man. There, he regularly gets thrown on stage and laughed at for his appearance. This is like hell for him; he's an educated man that wants to be respected as a human. Here he is being whipped: 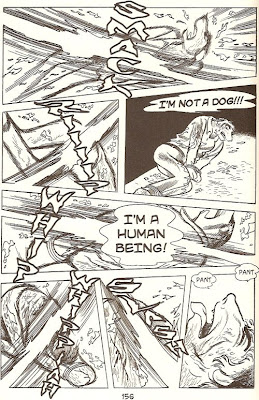 Eventually he ends up escaping and going on many adventures across the world while trying to get back to Japan.

At the same time, we follow Dr. Urabe, a friend and colleague of Kirihito's, as he investigates the circumstances of Kirihito's disappearance. He learn that Dr. Tatsugaura is quite corrupt and willing to do anything to win the election. Urabe gets sent to South Africa to investigate another breakout of Monmow, and he ends up rescuing a nun who has contracted the disease. Tezuka touches on some racial issues, as the authorities in South Africa refuse to believe that white people can contract the disease, so they try to kill the nun (who is white) to keep the evidence from getting out. Urabe ends up taking her back to Japan so they can examine her for research, but she is mortified and ashamed of her condition. This leads to some interesting discussions of Christianity, as Urabe convinces her by likening her suffering to that of Christ. It's fascinating to see the depiction of Christianity through Japanese eyes; Tezuka treats it very seriously, making Sister Helen (the nun) a sad yet devout figure.

I like the parallel that Tezuka draws between Sister Helen and Kirihito; they both feel ashamed of their condition and don't want people to see them. Kirihito is disgusted at being viewed as a freak, and Helen feels very similar about being put on display at the medical conference, even though it is a completely different situation.

Tezuka's characters are nicely complex, including a man who rapes two different women but still seems to be a "good" character. He has noble goals, but is portrayed as someone with uncontrollable urges (and, later, mental instability). It's hard to like somebody who has committed such despicable acts, but because we get to see different sides of him, he becomes more than a one-dimensional villain. In fact, the real villains of the book are also not just one dimensional (although Dr. Tatsugaura seems to do little more than stubbornly pursue power and acclaim): 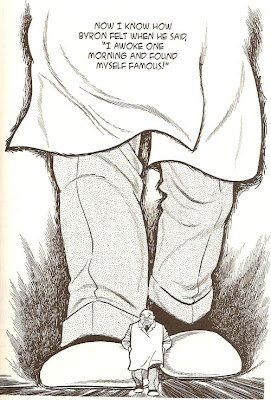 Especially Master Mahn, the man who runs the freakshow. He's clearly evil, but we see some of the circumstances that led to his nasty worldview. The female characters probably suffer the most, but this may be a result of their place in Japanese society. Izumi, Kirihito's fiancee, plays a mostly-subservient role (although she does what she can to help him), and Tazu, the woman who helps him in the village, is in a similar position. The non-Japanese women fare better, including Sister Helen, who is well-defined through her compassion for others while feeling shame at her condition. Another interesting female character is Reika, a woman that helps Kirihito escape from the freakshow. She ends up having some interesting traits of her own, but I won't go into them here to keep from spoiling some big revelations.

In addition to the writing, the art in the book is incredible. Tezuka breaks out a huge variety of tricks, including novel panel layouts: 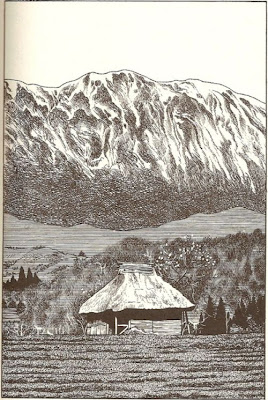 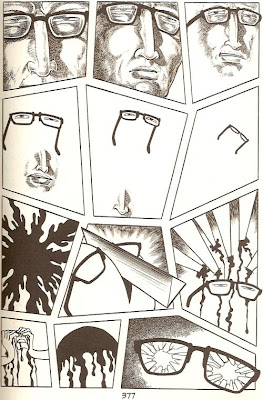 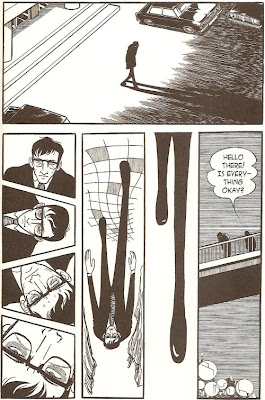 and switching from cartoony visuals:

to more realistic ones:

He does some interesting things with silhouettes: 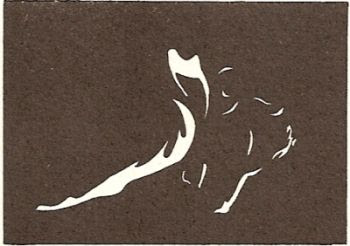 All in all, a wonderful book. I found it difficult to put down. It's very exciting in parts, but also contains some excellent quiet scenes between its well-developed characters. I highly recommend it, and I'm anxious to try more books by Tezuka.
-----

That's probably all for today. I'll try to do some more comics reviews tomorrow.
Posted by Unknown at 4:28 PM