King City: I'm not sure if I would want to live there or not 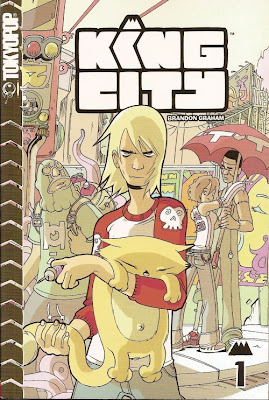 If I may say so, this comic is awesome. I know Brandon Graham has been around for a while, but I don't know of anything I've read by him (nothing in the "also by" list in this book, anyway). However, he still seems familiar, especially the way he draws girls' lips: 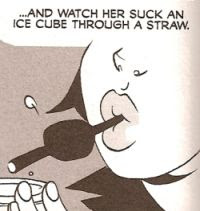 Where have I seen that before? Or is he just similar to other artists I know? Becky Cloonan, maybe? (I know they're both members of the Meathaus group). Whatever the case, I really dig his style, along with the barrage of crazy sci-fi ideas he throws on the page in this book.

The story concerns a young man named Joe, who returns to the titular city after an absence spent training as a "cat master". He now has a special (genetically-engineered?) cat that can do or become anything with an injection of "cat juice". He ends up getting related in various spy-related schemes and involving his ski-masked friend Pete. We also spend some time with Joe's ex-girlfriend Anna, who is dating Max, a scarred veteran of the Korean Xombie War who is addicted to a drug called chalk, which slowly turns its users' bodies into the drug for other users to use. Along the way, we encounter stuff like cannibalistic rich men, chainsaw swords, an alien water-dwelling girl, high-speed booger flicking, and a sasquatch landlord. It's a crazy world that Graham is building here, and it's fun to see the characters move through it. 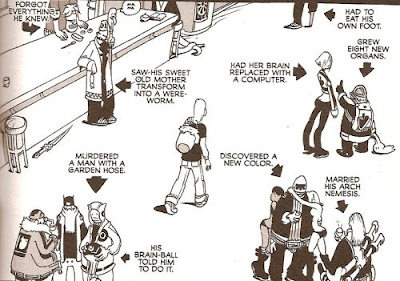 And the art is really cool too. The book is published by Tokyopop, so one would expect some manga influence, but the usual surface stylings like big eyes and speed lines aren't here. Graham does use some manga-ish storytelling techniques though, such as interesting panel layouts or "camera angles". One thing I love is his use of Japanese-style sound effects, either by making them part of the art: 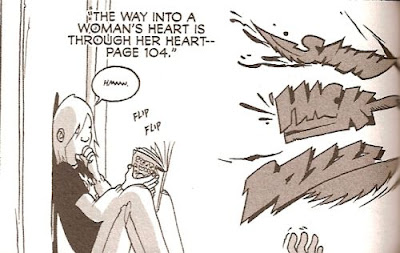 Or by coming up with weird words to use for sound effects: 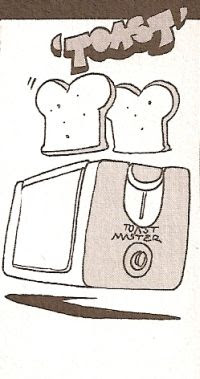 He's also great at depicting his characters and their expressions, even the cat (whose full name is Earthling J.J. Catingsworth III): 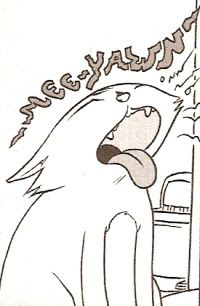 And I'm blown away by how sexy he makes his women, whether through looks: 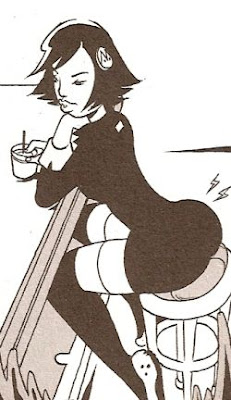 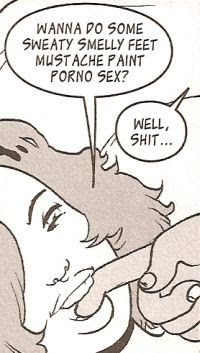 Yowza! So, it's highly recommended, and I can't wait for upcoming volumes.
-----

That's probably all for tonight, but expect more content tomorrow.
Posted by Unknown at 6:53 PM