UPDATE: See the entry for Good As Lily for links to examples of Jesse Hamm's art.

I usually try to combine my looks at DC and Marvel solicitations, but Marvel doesn't have theirs up yet. So I'll just do DC for now. Off we go! 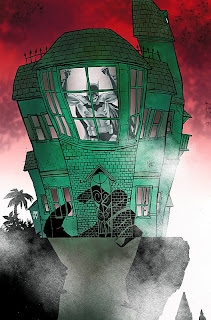 Batman #668 - It seems like DC is addressing me specifically here. I've been complaining about Andy Kubert's art on the series, so they're like, "okay, how about the best comics artist out there? Will that keep you reading?" My answer to that question is yes. J.H. Williams III will most definitely keep me on the title. Damn. 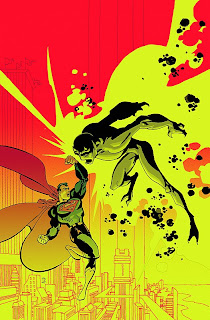 Superman Confidential #6 - The final issue of the Darwyn Cooke/Tim Sale collaboration. Has this gone bimonthly? It seems to be coming out less frequently. It's a pretty enjoyable story, and Sale's art is beautiful, as always. Nice cover, with the kryptonite monster (or whatever that is) surrounded by rubble that looks like Kirby Dots. Unless it's actually supposed to be Kirby Dots... 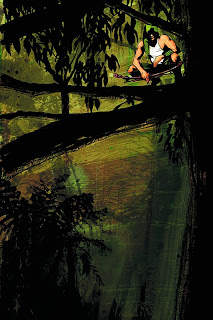 Green Arrow: Year One #1 (of 6) - The last thing I'm interested in is an exploration of Oliver Queen's beginnings (actually, that's not exactly true; I would probably be less interested in a Spawn/Transformers crossover), but the team of Andy Diggle and Jock (creators of the awesome Losers series) pretty much has me on board for this. But if it sucks I'll be dropping it like it's hot. 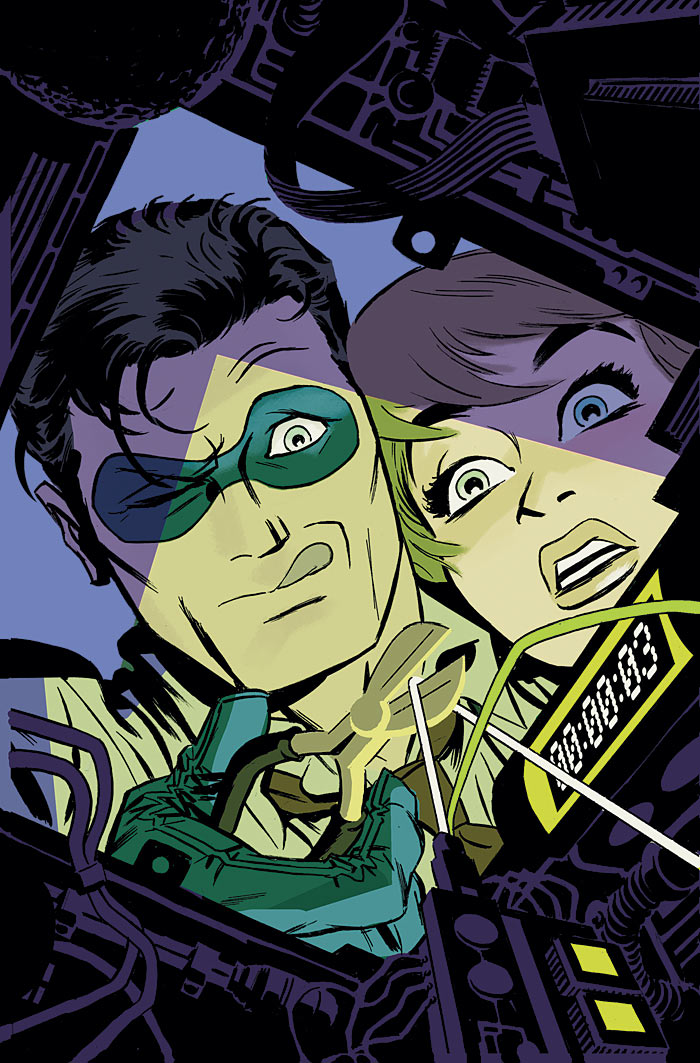 The Spirit #8 - This cover was previously solicited for issue #7, but it looks like that was incorrect. It definitely fits the description of this issue better, which is about the Spirit and Satin defusing a bomb. I guess we'll see what #7's cover looks like when it comes out. 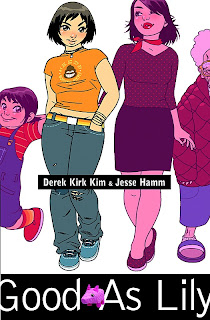 Good As Lily - Another Minx title, by Derek Kirk Kim and Jesse Hamm. It's an interesting concept, with a teenage girl interacting with other versions of herself from different points in her lifespan. I know a little bit about Kim, and I like his art (he did the cover), but I only know Jesse Hamm from the recent Mark Waid kerfuffle, so I can't say whether he is any good as an artist. I'll consider it.

UPDATE: Commenter Darwin left some links to some comics by Jesse Hamm. They're not bad, although I think they may be kind of old. I especially like "The Giantess". "Strange Appraisals" is also notable, due to its straw-man argument against abortion. And then there's "Religious Fred", an example of the Christian belief that everyone hates them (I grew up in that world, so I know it quite well). Anyway, these definitely have me interested in the Minx book. 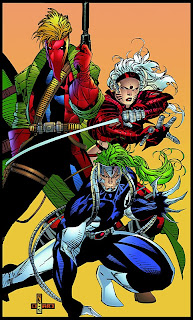 Alan Moore: The Complete WildC.A.T.S TPB - Wow, that is an ugly cover. I hate that 90's Image style, and I know very little (and care even less) about Wildcats, but I do like Alan Moore (of course). Is this any good at all? I think he created TAO (who I know from Sleeper) during this run, but I don't know anything else about it. I'll probably skip it. 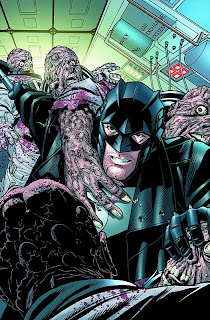 Midnighter #9 - This one is written by Jimmy Palmiotti and Justin Gray, with art by Brian Stelfreeze. I think it's safe to say I can drop this after the Brian K. Vaughan issue. Nice cover by Chris Sprouse though. 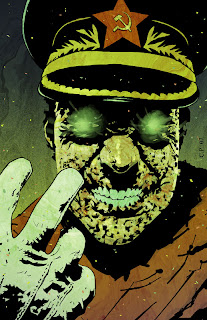 The Programme #1 - Ooh, now this looks cool. It appears to be a story about a super-powered version of the Cold War, written by Peter Milligan. Nice, creepy cover by C.P. Smith, who apparently has done some issues of Garth Ennis's Punisher. My interest has been piqued. 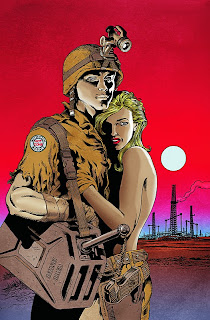 Army@Love #5 - This is a nice cover, filled with obvious symbolism. You've got sex (exemplified by the topless woman and the phallic gas can spout), violence (the gun), voyeurism (the camera), and consumerism/U.S. foreign policy/Middle East issues (the oil pumps and the gas can again). I like it. Rick Veitch is awesome. 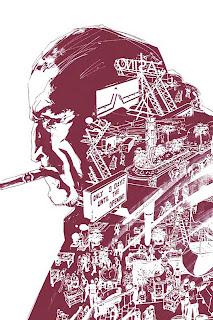 Scalped #7 - I haven't been reading this series, and I don't really plan to start, but I gotta say I really like this cover by Jock. 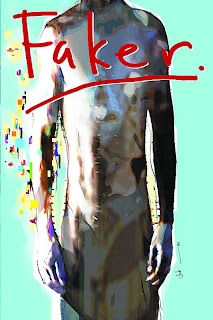 Faker #1 - Speaking of Jock, here he is again, both on the cover and interior art. This is a strange-sounding new series written by Mike Carey, about characters entering college and reinventing themselves, with a supernatural twist. It certainly sounds interesting, and I hope Carey can pull it off. Having Jock do the art will definitely help. 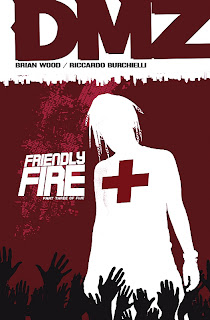 DMZ #21 - "Friendly Fire", part 4 of 5 (although the cover says part 3). It looks nice, as always, but I'm not sure what else I have to say, since the storyline hasn't started yet. 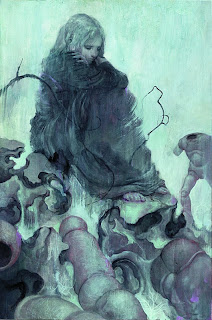 Fables #63 - Beautiful James Jean cover, as always. It looked familiar to me, but maybe I saw it on Jean's website or something. I'll be picking it up in trade format. 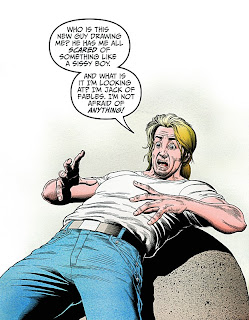 Jack of Fables #13 - This is one I buy monthly though, and it's always good. The new super-secret cover artist appears to be Brian Bolland, who is a great choice. 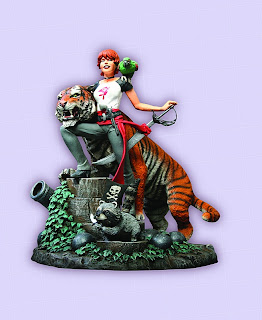 This one's not a comic, but I wanted to point it out because it looks cool. I love the raccoon weilding a knife. I like the Snow White/Bigby statue better though. It doesn't really matter, because I'm not going to spring $195 for either of them. 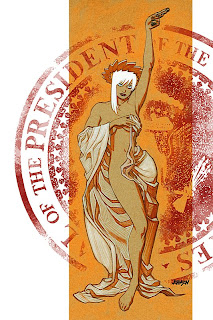 100 Bullets, volume 11: Once Upon a Crime - Man, they like to make me wait for these. Grrrr. I predict awesomeness though, and maybe an update of my character relationships chart. 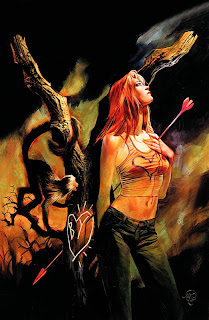 Y: The Last Man #57 - Wow, this is a beautiful cover. I love the symbolism, with Beth being pierced through the heart (by Yorick falling in love with 355?) and the arrow/spear continuing through the "Y" half of the heart carved on the tree. Are Beth and Yorick only linked through death and pain? I can't wait to read the final issues of this book; it's one of my favorites.
-----

It looks like that's it for DC. Kind of a light month, but that's fine with me; I'll have more money for manga or something. I'll get to Marvel in another post, so stay tuned!
Posted by Unknown at 10:25 AM