Wasteland: What a waste

That title makes it sound like I'm saying this book is a waste, which it's not. Oh well. On with the show: 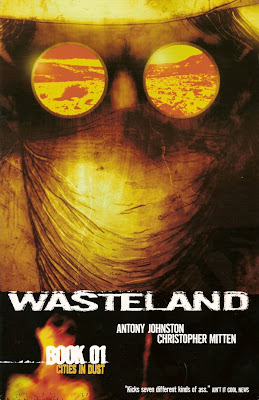 I'm having trouble thinking of good stuff to say about this one. I read the first two issues of the series when they initially came out, and while I didn't exactly dislike them, they didn't "grab" me enough to make me feel like spending my money on a monthly basis. Well, now that I've read the collection of the first six issues, I think I like the series a little better, but I'm still not sure if I'll read the second collection or not. I do think it reads better as a whole, and I probably would have had a little trouble keeping up with the characters from month to month.

Anyway, it's a post-apocalyptic thing, which we're told takes place 100 years after "The Big Wet". The land appears to be desert now, and all the cities are in ruins. We're introduced to our characters, who are divided into two groups: a band of villagers who are traveling to a larger city, and the power structure of said city, which seems to be somewhat corrupt (that's an understatement). There's also a character who is a bit of a wild card. His name is Michael, and he is a wanderer, going it alone in the desert. He ends up wandering into the town of Providence, inadvertently bringing some (cannibalistic?) mutants called sandeaters after him. In the ensuing battle, the village is burned down, forcing the villagers, led by the sheriff Abi, to make a trek across the desert to the city of Newbegin.

Meanwhile, we see the political machinations of the leaders of that city, especially the Lord Founder, a blind religious leader (and de facto head of the society) who hates the Sunners, a competing religious sect that worships the sun. Most of the slaves in the city are Sunners, and he is worried that they will revolt (or maybe he's just unhappy that he is not the object of their adoration), so he makes moves to suppress them. Of course, the refugees making their way to Newbegin are also Sunners, so you know that will lead to trouble when they get there.

Over the course of the book, the refugees deal with plenty of hardships, including slave traders, wulves, and more mutants (these ones are called Dwellers and live in the ruins of the skyscrapers that made up the old cities). They only just make it to Newbegin at the end of the book, so the religious conflicts will have to wait until the next volume for a resolution.

It's a pretty interesting world that Johnston has built (is building?) here, with lots of details about religion, customs, and language. We get some hints of future plots when we hear of the legend of a "promised land" called A-Ree-Yass-I, and see that both Abi and Michael seem to have psychic abilities (healing and telekinesis, respectively). It should be interesting to see where the story goes in the future. 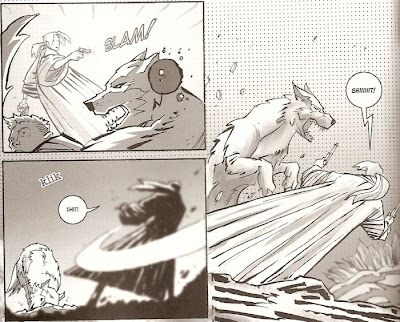 I like the blur effect he uses at times on items or characters in the foreground. It's very cinematic. He also pulls off a neat effect in a scene where the villagers' holy man tells the legend behind the current state of the world. It seems to be done with layers of paint: 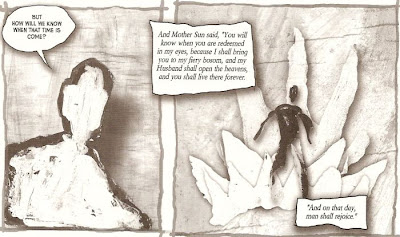 It looks really cool in black and white. He also uses this "painted" look at times to give texture to backgrounds like rocks and sand. It's very nice.

Well, I think I convinced myself to keep reading this series, whether by catching up on the issues or by getting the next collection. One thing to mention is that the single issues contain some text pieces and other extras giving some background on the world. These are not included in the collection; I read some comments by Antony Johnston saying that it was a way of rewarding readers for not "waiting for the trade". The latest issue that has been published is #8, so it would be easy to catch up the the issues after reading this volume. Whatever the case, it's a pretty good series; I'll give it a modest recommendation.

Thanks to Oni Press for the review copy.
Posted by Unknown at 5:50 PM