Well, my last post about Shojo Beat was probably my most popular post ever, so here's a follow-up: 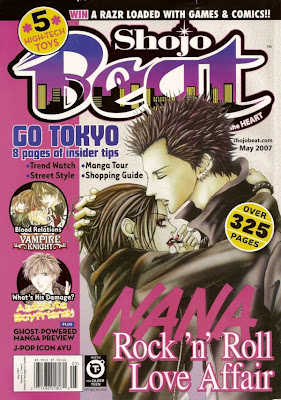 I don't know how well this will work, reviewing serial manga on a chapter-by-chapter basis. Often, not a whole lot will happen in a chapter; sometimes you need several chapters or a whole volume to get a good chunk of material. So we'll see how this goes, but I might wait a few months between reviews, or only talk about the series in which significant events or moments take place.

Anywho, the first manga in this issue is a preview of a forthcoming series from Viz, called "Yurara" (by Chick Shiomi). It's about a girl who can see ghosts. Being the first chapter of a shojo series, it's her first day at a new school, and she hopes to get a fresh start since she's developed a reputation for being weird, seeming to zone out or start crying for no reason when she gets distracted by spirits. So she doesn't have any friends, and the popular girls pick on her. At the new school, she meets two cute, popular boys who act strangely around her, seeming to pick up on the fact that she has supernatural abilities. It turns out that they also can see ghosts, and they also have spiritual powers. They all end up confronting a ghost together, a girl who has it in for Yurara for taking her (the ghost's) seat, and Yurara demonstrates some other psychic abilities. This bit is pretty goofy, where one of the boys uses his ability to control water to stop some shards of glass that the ghost is throwing at them (click on images to enlarge, and remember to read right-to-left): 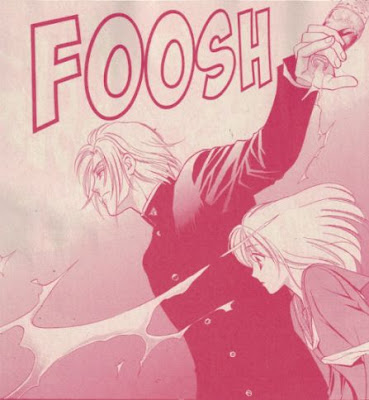 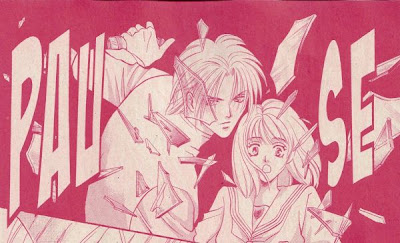 It's an interesting enough series, and while I don't think I'm going to follow it, it's definitely better than some of the ones that have previewed in Shojo Beat.

Next we've got "Crimson Hero", and this chapter seems to be another transitional one, as one of the girls on the team deals with problems at home or school (setting up future conflict, probably), and the team gets a new coach who seems to be a hardass: 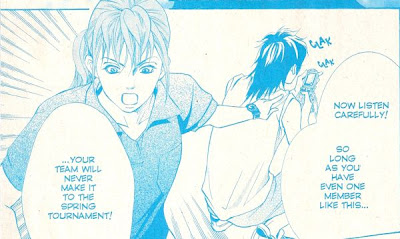 Of course, she's really making them realize they have to work really hard if they want to be any good. I'm sure she'll turn out to be nice in the future. Or maybe not; maybe she'll be a good coach despite being a jerk. We'll see.

Here's one other good moment from the chapter, in which the boys' team calls Nobara from a tournament, celebrating a victory:

Up next: "Vampire Knight". This chapter is a flashback to Yuki's earliest memories, after she was rescued from a vampire attack as a child by Kaname. As I mentioned previously, it's not my favorite series, but I did like one element of this chapter: Yuki's amnesia. After the rescue, she doesn't remember anything, including how to speak, eat, or dress herself. In stories dealing with amnesia, characters often function perfectly normally, losing only the memory of their identity. This is one of the few examples I can think of in which an amnesiac completely forgets how to function. It's actually played for laughs (a rarity in this ultra-serious series), like in this scene in which Yuki tries to dress herself: 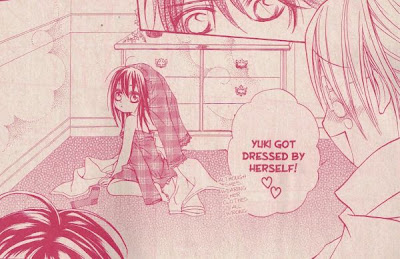 Other than that, the only thing I liked was this shot of Zero practicing at the shooting range:

The chapter ends with Zero's arrival, so the flashback will continue next issue, and we'll learn about Yuki and Zero's history together. Whoop-de-doo.

And here's another yawner: "Yume Kira Dream Shoppe". In this chapter, we learn the origin of Alpha, the plush bunny sidekick of Rin, the proprietor of the titular Shoppe. He (Alpha, not Rin) was a stuffed animal belonging to a shy girl, and he wished he could move and talk to her so he could help her meet a boy she liked. And then after that he committed suicide by jumping off a bridge. But Rin liked him and adopted him or something. Does Rin only grant the wishes of inanimate objects? Weird. So, boring stuff, but luckily I only have to endure two more chapters of this drivel before a new series starts. I will say this though: the way the artist (Aqua Mizuto) draws her characters' eyes kind of freaks me out: 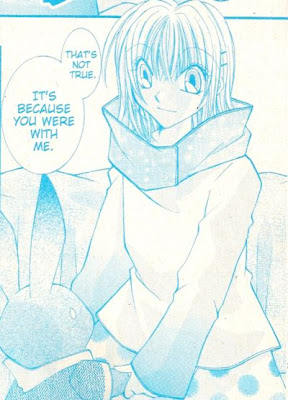 So, on to: "Baby & Me". We learn more of the story of Seiichi in this chapter; he's the former neighborhood bad boy who returns home seeking help (aka money) from his parents, only to be rejected by them. We find out that he actually has a wife and infant child, and he needs the money for an operation for the baby. Why he didn't say that in the first place, I don't know. Pride, I guess. So his parents welcome him after learning the truth. I expect he'll stick around, so hopefully we'll get some more character development from them. Or maybe we'll return to cute toddler antics. Who knows?

One thing I noticed here is that I think the artist (Marimo Ragawa) has trouble depicting older/middle-aged people. Check out this shot of Seiichi's mother: 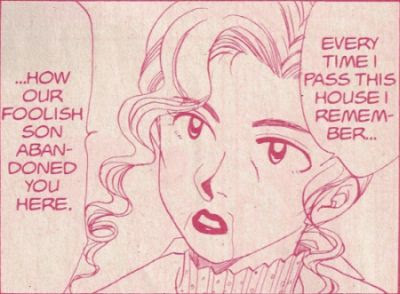 It looks like Ragawa just added some lines to a normal face, hoping they would look like wrinkles. It looks a little better from farther away: 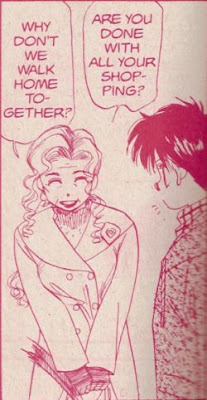 But it's still kind of awkward-looking. Huh.

Okay, now we're getting to the good stuff: "Absolute Boyfriend"! After the last chapter's big fight, Night is acting kind of strange: 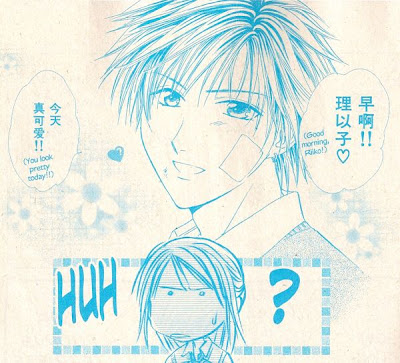 He's speaking Chinese! Later, he also speaks Spanish, French, and German without realizing it. Also, smoke starts coming out of his ear, leading to this hilarious scene: 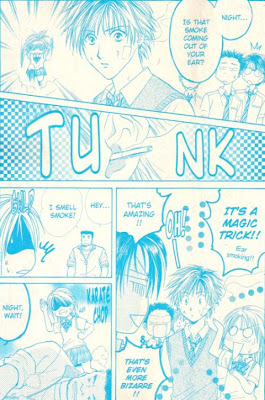 That made me laugh out loud when I read it. Yuu Watase is a master of physical comedy.

So Night is damaged pretty badly, and Gaku has to show up to fix him. Other plot developments: Toshiki (the other robot/"figure" that Night fought in the previous chapter) shows up as a student at Riiko's school, revealing that he's been upgraded and sold to a rich elderly woman; and Soshi discovers that Night is a robot, leading to a disturbing cliffhanger in which he seems like he's going to hurt Riiko (or worse) out of jealousy. Uh oh. Violence against women, and even rape, seem to be subjects that Japanese culture uses more often (or at least more casually) than we do, and this isn't the first time this series has used the possibility of rape as a plot point. It's kind of disturbing in a lighthearted comedy like this one. We'll see what happens next month, but I wish Watase would stay away from stuff like this.

Finally, we have my favorite series: "Nana"! I always read it last, because I know it will be the best thing about any given issue. This month: Nana's band, the Black Stones, have a big show and get a meeting with a record executive. They're getting pretty popular, so they seem to be on the road to fame and fortune. Unfortunately, Hachi is feeling left behind and lonely after she prepares a big after-party for them and they don't show up because the executive is taking them out for dinner. Even though she's trying to disentangle herself from him, she ends up running into the arms of Takumi. And then Nana decides to go spend some time with Hachi, but it's too late. It's good, meaty soap opera stuff, the kind of thing that could be resolved if characters would just talk to each other. But really, the same thing happens in real life, so it's really not that unrealistic.

So, it's another solid chapter. Here are a couple excellent images of Nana performing: 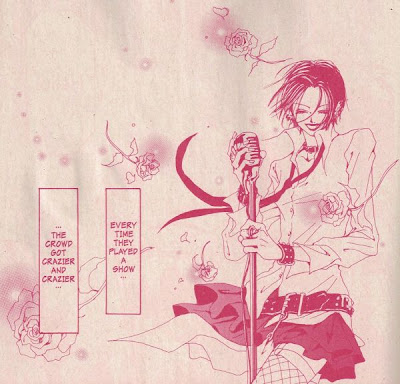 So that's it for this issue. I'll see if I feel this sort of recap is necessary for future issues; I might stick to just covering the ones I like, or alternating months for each of the three series I enjoy ("Nana", "Crimson Hero", and "Absolute Boyfriend"). Please let me know if you have any comments, questions, or complaints!
-----

Okay, that's my post for the day. I might manage to post something tomorrow, perhaps pertaining to a certain "man" who some might consider to be "insane". Come by and find out!
Posted by Unknown at 7:08 PM