This is what happens when there's a light comics week

I actually get some timely reviews done. So here's what I thought was notable in new comics: 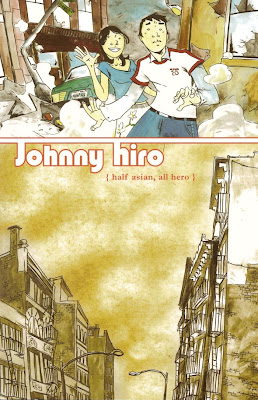 This is a fun comic about a guy who is, as the cover trumpets, "Half Asian, all hero". I'm not sure if his name is actually Johnny Hiro, or just Hiro. He is awoken from peaceful sleep one morning by the creation of a large hole in his apartment's wall, as his girlfriend Mayumi is snatched out of bed by a giant monster known as: 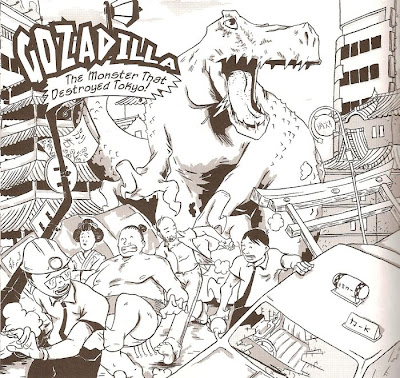 So he goes chasing after her, only to get flung around by the monster's tail. Much of the issue is actually taken up by flashbacks, featuring remembrances of childhood injuries (from Hiro) and defeat at the hands of a giant robot (by Gozadilla). It's all quite amusing, featuring panels like this: 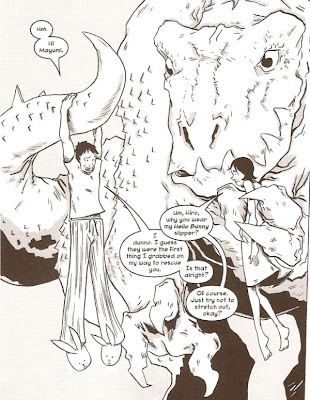 In fact, I'm going to declare that my current favorite panel. In the end, the monster is defeated (spoiler, but it's kind of obvious, isn't it?), and New York's (that's where the story takes place) Mayor Bloomberg shows up to have the damage fixed without anyone being the wiser. Fun!

So it's a simple story, but the art is great, as you can see from the samples provided. Chao's linework is simple yet quite detailed, and he has a great sense of whimsy. I especially liked Hiro's (possible) supernatural experience and the personalities of the robot pilots in the flashback. So, recommended. Does anybody know if this is intended to be an ongoing series, or is it just a one-shot?
----- 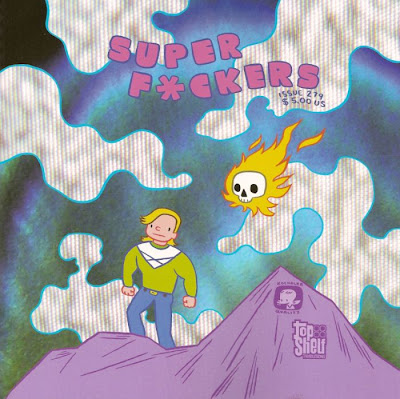 Oh man, this series is hilarious. It's just pure, obnoxious, filthy, profane fun with a team of slacker teenage superheroes who sit around getting high, having sex, and making gay jokes. It's hard to even describe it. I will mention that Kochalka's cute art is a great contrast to all the disgusting goings-on. All the male nudity looks especially weird on these simply-drawn characters and pastel colors. I think I'll just share some of my favorite panels, noting that several of these made me laugh out loud: 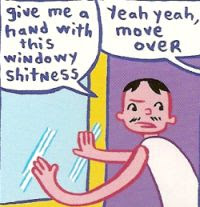 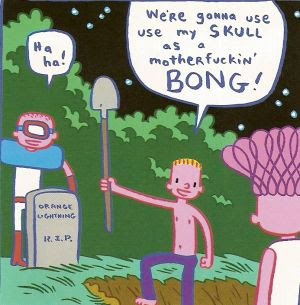 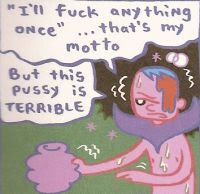 So, if any of those annoy/offend/disgust you, this probably isn't the book for you. But if, like me, you think they're funny, you'll love it, because each issue is like this on every page.

One question though: I thought I read somewhere that this would be the last issue, at least for a while. Is that true? I suppose I could do some research, but does anybody want to do it for me?
-----

I also picked up the latest issues of Powers and The Punisher Presents: Barracuda, but I don't have much of substance to say about them. Barracuda is in the middle of the miniseries, so most of the action will occur in the final two issues, I suspect (although there is some good action this month). As for Powers, it was decent, but I think I've decided to stop reading it monthly and wait for the trade. It comes out kind of sporadically, and I'm finding it harder to get caught up to the plot each issue. I suspect it will read better in larger chunks.
-----

Okay, that's it for new comics, but I'm starting to write about another one now, so check it out later this evening.
Posted by Unknown at 5:59 PM