Timely reviews, for once

Wow, some reviews of comics that came out yesterday! Will wonders never cease? It usually takes me at least until Saturday or so before I get around to reviewing any of them. But I have some free time tonight, and I felt like discussing several of the issues I read today. So here we go!

...of course, we're leading off with one that didn't come out this week. But I'll get to new stuff after that, really! 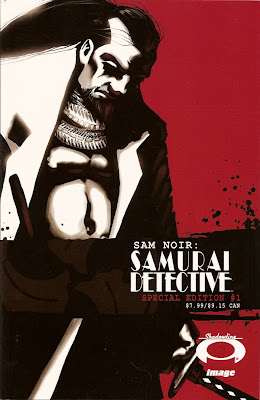 So after I finished reading Ronin Holiday, the miniseries that followed Samurai Detective, I got around to reading the original story. And I gotta say, it's pretty awesome. This story is even more action-packed; the girl that Sam loves is killed, and he hunts down those responsible, hacking his way through tons of henchmen and narrating in his usual witty style. And man, some of the narration is great, like this passage: "The thing about arrows is: they're pretty fast. And they're really pointy on one end. It's an important thing to note. But there's a trick to fighting archers that they don't teach ya in school: don't get shot with an arrow. Everything else just kind of sorts itself out." I love that stuff, and it's on almost every page.

And Trembley's art is just perfect, suiting the mood with its deep shadows. One thing I noticed was the gradual increase in roughness of the panel borders (I have no idea why I always notice panel borders). They start out ruler-straight (while still drawn roughly) at the beginning, but as the violence of the book increases, they become more curved and angular. The panel layouts become more innovative as well, reflecting the chaotic nature of a swordfight or an intense moment of Sam shouting at a henchman to get information.

The fights are very well choreographed also. I found it very easy to follow the action as Sam keeps slicing up bad guys. Here's one of my favorite pages: 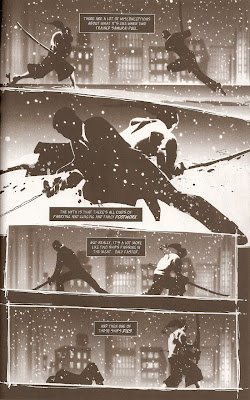 It's a classic samurai showdown. Well done, Manny. Oh, and I should also mention that I like how Trembley draws the blood splatters, making it look like blood is literally splashed onto the page. Nice.

So, it's a great book. I highly recommend checking out the collection of the two miniseries that comes out in June.
----- 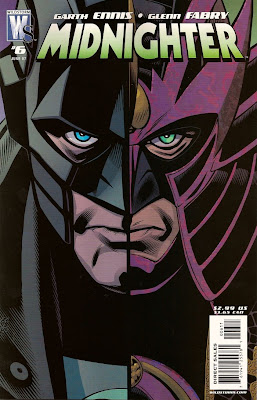 Hey, this is a pretty good segueway, as this is another samurai story! It's a strange one though, retelling the story of Apollo and the Midnighter in ancient Japan, without explanation. I guess it's an alternate history or something. But is it any good? Well, I liked it. It's nice and violent, as I predicted, with Midnighter recounting the story of his service to a shogun and how it led him to meet a stranger who "looked like the sun". They become lovers, of course, but due to intolerance, Apollo is killed and Midnighter must avenge him. It's an all right story, but the real draw (for me) is the depiction of the violence and gore, which Ennis and Fabry deliver in spades. We get blood and guts, with flying limbs and rolling heads. Good times. And this kick isn't to the face, but I wouldn't be surprised if Chris Sims chooses it as his Kick of the Week:

I also like Midnighter's "tribute" to his fallen lover. Yikes. So it's an all right issue, but pretty skippable if you aren't following the series regularly (or even if you are). I don't know if Ennis is going to continue writing this series, but if he does I'm wondering if this will be a recurring feature: Midnighters throughout (alternate) history. Maybe we'll see medieval knight Midnighter, or WWI Midnighter. Saracen Midnighter? American Civil War Midnighter? Clint Eastwood-style western Midnighter? Who knows? It could be interesting though.
-----

The Dark Tower: The Gunslinger Born #3 (of 7)
Written by Robin Furth and Peter David
Art by Jae Lee and Richard Isanove 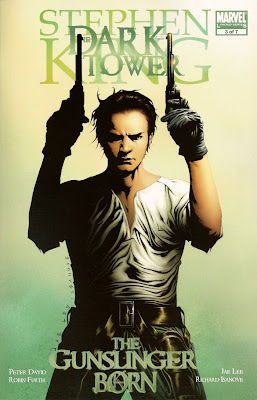 I'm definitely digging this series, but I don't if I have much to say about it. The writing continues to be interesting, and I'm either getting used to the second-person captions or they've been toned down a little. It's an interesting world that Stephen King built here (in this issue we see operating oil derricks and the wreckage of tanks and planes), and the background and history is fleshed out in text pieces in the back. If anybody reading this has read the novels, can you tell me how this information was presented? Are these paraphrases of sections of the books, or is this all stuff that Robin Furth gleaned from the text and put together? Just wondering.

The real draw of the book continues to be the artwork, and Jae Lee and Richard Isanove really deliver. There's a really creepy revelation of a villain in this issue that I considered scanning, but I decided against it since it's more effective when you turn the page to see it. I'm also impressed with their depiction of Susan Delgado, who I assume will become Roland's love interest. They make her look incredibly beautiful, especially her eyes:

I don't know how they manage that; there's really not much on the page there but for a few lines defining her eyes and some color to give shade and complexion to her face, but they make her look downright fetching. And then there's this moment, which I've decided is my current favorite panel:

I love the way Lee captures them just before their lips actually touch. Beautiful.

So, recommended, although if you haven't been reading it, you might want to wait for the inevitable collection.
----- 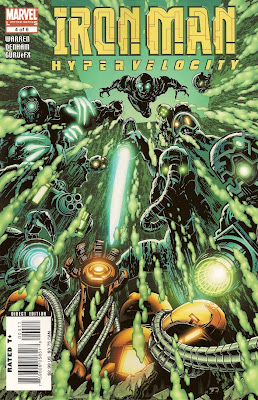 Wow, this book is great. I'll try not to give any spoilers here if you haven't been reading it. In this issue, Iron Man finds himself underwater on a sunken ship where a "rave" for underground mecha is taking place. They're all hopped up on a software drug called Mekstacy 4.7, but it turns out his enemies wrote the code for that drug, and they buried some "wizardly utilities" inside it, allowing them to control all the druggie mechas and attack him. I love the way Warren writes techological sci-fi, and he's been pulling out all the stops in this series, detailing stuff like underwater rail guns, auditory weaponry, biocamouflaged comm drones, neon armor tattoos, supercavitation, and "loudmouth" microdrones. And that's just in this particular issue! He's also great with action scenes, and this one is awesome, as Iron Man struggles against an army of mecha that are "employing mechajitsu techniques, grappling with myomer brawn and electromagnetized grasps". That's some crazy stuff. Here's a good sequence in which he reacts to being shot at by a rail gun with adamantium bullets:

I would complain about Denham's murky art, but I think I've gotten used to it, or at least accepted it. It works pretty well here, and it's probably damn hard to illustrate stuff coming from Warren's imagination. So, check it out. The first few pages of this issue give a pretty good summary of the series so far, so if you're curious about it, this is a good issue to pick up.
----- 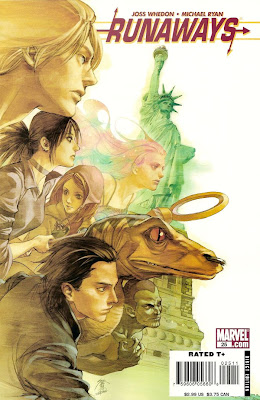 Well, this was the big question mark of the week; can Whedon follow Brian K. Vaughan on the book he created? I'm (reservedly) happy to say he's doing pretty well so far. Hopefully he won't blow it in future issues. Another big question (although it's really part of the first one): who the hell is Michael Ryan? Okay, I know he's done other stuff and he's not exactly unknown; the real question is whether he can follow Adrian Alphona. He does okay, although his style leans more towards one of the previous fill-in artists, Takeshi Miyazawa, in my opinion. Perhaps the best artistic continuity comes from the colorist, Christina Strain. Her depiction of Karolina's powers is one of the signature looks of the series; I don't think anyone else could do it the same way (although Jo Chen does a pretty good job on the cover):

As for the story, Whedon has brought the team back to New York, although it seems to be just for a visit; hopefully they'll continue to be based out of L.A. We don't know exactly why they've come to the city yet, but they're caught up in a scheme that they apparently don't fully understand, and the last page reveal of next month's guest star (who you can guess by the cover of next month's issue) is pretty good. Whedon's doing a pretty good job of writing all the characters, capturing their distinct voices pretty well. I'm especially glad he gets Molly right, since she's my favorite. And there's a really cool action scene with Chase and Old Lace that I won't spoil. So it's a good start, and I'm hoping it continues to be good. If you're a long-time fan, you'll probably be fairly pleased and hopeful for future issues; if you're new with this issue, there's a great introduction to the team and their history in the opening pages, so you don't even have to feel like you've missed anything. Best of both worlds. Keep it up, Whedon!
-----

So that's all I've read so far. I still need to read Wolfskin, Iron Fist, and Jack of Fables. I'll review them another time, if I feel like it's worth it.
Posted by Unknown at 7:23 PM