Drifting Classroom: Prepare for much screaming

I don't really have the time or energy to discuss recent comics tonight, so here's one that I've been wanting to talk about: 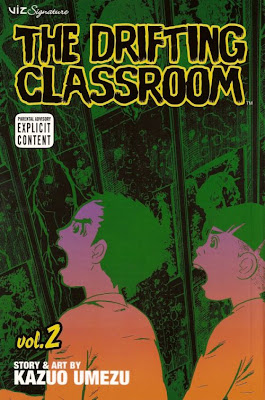 This manga seems pretty popular in the blog scene, but I figure it's still worth talking about. For those who don't know, the premise is that an entire elementary school full of children and teachers has been mysteriously transported to some vast desert wasteland. Being stuck there without any hope of rescue, they all begin to go crazy and commit violent acts upon one another. There's much panic, and lots and lots of yelling. In fact, it seems that every mention of the book that I read has to comment on the fact that nearly every line of dialogue is SHOUTED HYSTERICALLY!!! I was going to try to not mention that aspect, but it's pretty much unavoidable, and it's one of the most memorable and endearing aspects of the series. However, I think another really striking aspect is the sheer amount of violence, especially that committed by or directed toward children. It's the kind of thing that would be condemned in the United States, but it gets a free pass because it's from another culture (or maybe it's just under the radar so far). A recent parallel that comes to mind is the "Planet Terror" segment of the film Grindhouse, [SPOILER warning for the movie, seriously, if you haven't seen it you don't want this ruined] in which a child is told to be careful handling a gun and then promptly blows his own head off. It's a shocking moment, but sort of funny because you wouldn't expect something like that to actually happen in a movie. Well, Drifting Classroom is like that moment repeated over and over and taken to even further extremes [end spoiler].

A theme that I've heard mentioned for this series is "Don't trust adults," and it's pretty evident in this volume. At the beginning of the book, the school's cafeteria delivery man has claimed all the school lunches as his own, refusing to share them with anybody else. The kids and teachers formulate various plans to take him down, but he's got a knife and he's not afraid to hurt anybody. I won't spoil what happens with him, but it's a great scene. Later, some of the kids strike out across the desert surrounding the school, and they end up running from their lives from a crazed adult. Those damn adults ruin everything. And at the end of the volume, Sho (the kid who is basically the main character) seems to have found the ability to contact his mother. It's weird, and a hell of a cliffhanger.

But the real experience of the series is astonishment at what happens. It's a series of "Oh shit!" moments, as you can't believe Umezu will actually go as far as he does. Here's some examples: 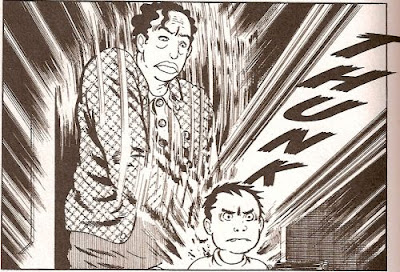 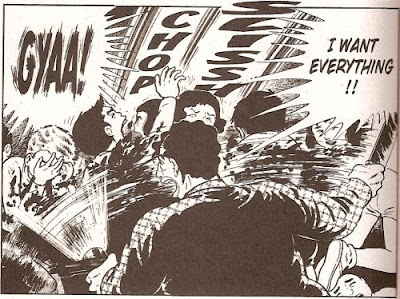 It's like that through the whole series. In the preview for the next volume, we see a kid being crucified and burning alive. Sounds like fun (I'm really not as sick as this makes me sound). Volume 5 just came out, so I need to get caught up toot suite. Until then, I leave you with this horrifying image: 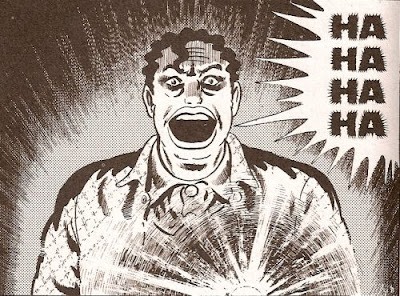 UPDATE: Be sure to read Matt Thorn's comment below, as he gives some cultural context for this manga. It's fascinating stuff.
Posted by Unknown at 9:35 PM