Thoughts on my latest time-eater

Or maybe "time-devourer" would be more accurate. As you might have noticed on the sidebar, I'm currently playing Final Fantasy XII on the Playstation 2, and damn, it is one addictive game. It's easy to lose several hours at a time just wandering around and killing monsters. I've played a few FF games in my time, but I don't know if I've ever completed one (I still need to go back and try to finish FFX), so I'll see if I can get through this one. I've played around 20 hours so far, and I can tell I have a long way to go. Anyway, here's some random thoughts about the game, which I might follow up after more playtime.

It's got a pretty good cast, including your main party and various non-playable characters (NPC's). Here's the main party: 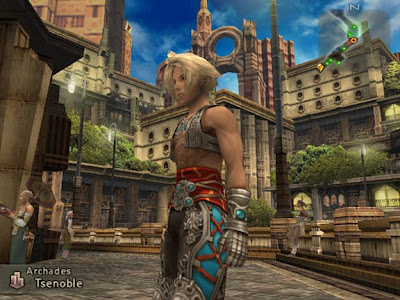 He's the main character of the game, pretty much, although the storyline seems to be overshadowing him at the moment, making him just some guy that got swept up in these epic events. But maybe by the end we'll get to see why he's included in our band of merry adventurers, other than being in the right place at the right time. He's your typical RPG hero, a brash youth with lots of spirit, etc. An orphan who dreams of being a sky pirate (the world of the game has lots of cool magical technology mixed in with the fantasy elements), he ends up helping rescue a lost princess and joining her to help restore her kingdom. By the way, his name is pronounced "Von". They always have to come up with silly spellings in these games, but luckily they have voice actors say them out loud so we know how to pronounce them. 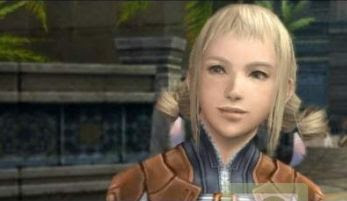 She's Vaan's childhood friend, and she ends up tagging along when he goes on his big adventure. At the moment, that's about as far as her character development goes, although they'll probably do something else with her, if only to fill out more of the 70 or so hours of game time. Her name is pronounced "Peh-NEH-loh". 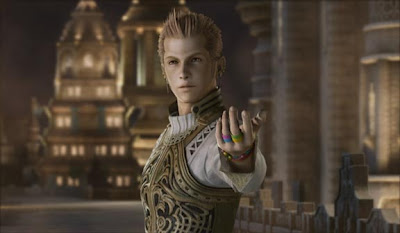 Now this guy is probably my favorite character so far. He's a sky pirate who also got caught up in these events along with Vaan. He's the Han Solo character (even commanding his own ship and being pursued by bounty hunters), if a bit more suave and witty (complete with English accent!). Why he is helping out the princess, I'm not sure, unless he (like Han Solo again) has a heart of gold even though he says he just wants treasure. Whatever; he's just fun to have around. (He's pronounced "Ball-THEE-er"). 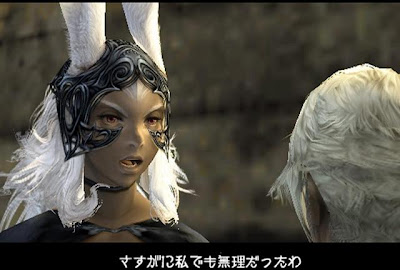 She's a weird one, a rabbit-lady (her race is actually called the Viera) who's good with magic. She's Balthier's partner, so she tags along with him. One of those "mysterious" characters. For some reason, she wears skimpy armor, including a Witchblade-style battle-thong. That's silly. We get some backstory, where she was rejected by her society for leaving their village and exploring the world or something, but whatever; it's standard fantasy stuff. 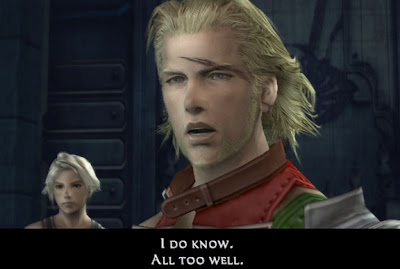 This guy is the badass soldier type. He was wrongly accused of murdering the king, just wants to protect the princess, yada yada yada. (pronounced "Bosh"). 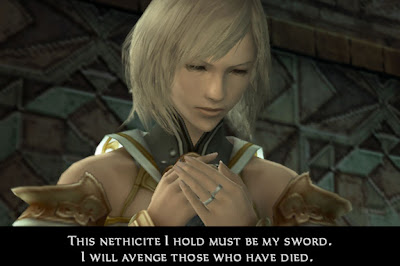 And here's the princess we've heard so much about. There's a big plot about an empire that attacked and conquered her kingdom, and she went into hiding while another guy spread word about her committing suicide. And now she's trying to get her kingdom back, with the help of the rest of the plucky adventurers. (by the way, she's pronounced "Ash"). And she wears a really, really short miniskirt (see below) that can't be very practical.

All the plot and everything is pretty interesting stuff, but to tell the truth, I just enjoy the traveling around and fighting monsters and stuff. But that leads me to some other points.

I remember there being a lot of discussion about the battle system in this game before it came out, and now that I've played it, I think I like it a lot. In a normal RPG (that stands for Role-Playing Game for anyone who doesn't know what I'm talking about), when you fight enemies, you enter a "battle mode", with your characters and the monsters or whatever arrayed on a battlefield, taking turns attacking each other. Various games have messed with that formula and tried different ways of approaching it, but this game almost throws it out altogether, going for a different style of play. From what I understand, it's more like the fighting in a massively-multiplayer online RPG (MMORPG), without a separate battle mode; you see the monsters on the screen and just walk up and attack them. 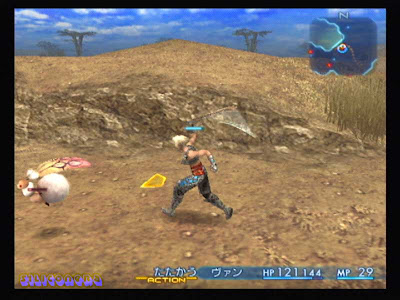 Of course, you have to wait for each character to build up a meter before they can take an action, so you're still pretty much taking turns, but it's such a drastic revision of the system that it's a completely different style of play.

Also, there's what the game calls its "Gambit system", in which you can program your characters to act a certain way automatically when you're fighting. For instance, you can have them heal any party member who is below 60% health, or attack the nearest visible enemy. You can tweak these settings, or turn them off completely, but it makes the battles pretty interesting. For the most part, I just walk up to a monster and watch my guys kill it. That might not appeal to everybody, but I dig it. And I like the way the game draws lines from a character to the enemy they're attacking or the person they're healing. 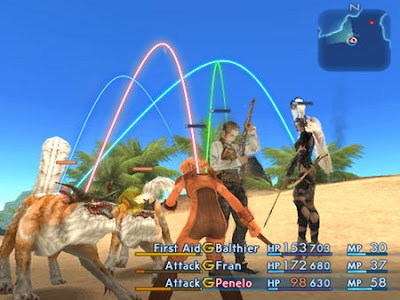 The other thing I like is the "License system", in which you assign attributes to your characters. Like most RPG's, you gain experience and go up in levels, but the weapons, armor, and magic you use are assigned on what the game calls a "license board": 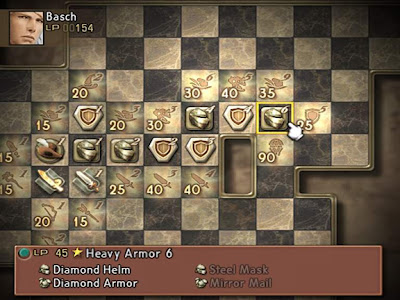 The cool thing is, you can assign licenses for items and abilities however you want. I went the traditional route, making the female characters the magic users (except Vaan), and the males the powerful fighters, but you can change it up, making little Penelo the badass weapon user and soldier-boy Basch the healer, if you want. I like that; it gives you freedom to develop the game however you want, rather than having certain weapons or magic only work for one character.

And like I said, wandering around and fighting monsters is great fun. I spend forever doing that, and picking up the stuff foes drop (rather than just dropping money, they drop hides or pearls or other "loot", which you then sell for cash to buy stuff), then puttering around the license board and activating new abilities for characters, fine-tuning who can wear which type of armor or wield a certain weapon. That might be boring for some, but I'm enjoying it.

Ah, now here's the aspect at which Final Fantasy games always excel. The Square/Enix team came up with some beautiful designs for landscapes, buildings, monsters, magic spells, and characters. I've noticed in other FF games how the level of graphical definition changes depending on whether you're watching a cutscene, wandering through the landscape, or fighting a monster. Here, it all looks much the same; although some cut scenes are fully animated and look similar to a computer-animated movie, even the scenes of wandering through cities and fighting monsters look amazing. I was playing the other day, and my character was walking by a river, when I noticed that I could see the reflections of clouds in the water. It was really cool. 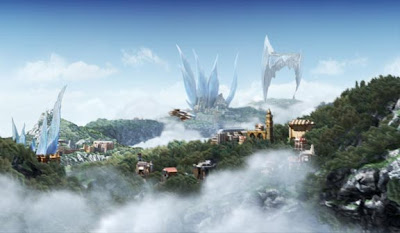 Really, many of the landscapes are downright breathtaking, and the cities are not much different. The architecture for the buildings is amazingly detailed, with castles and fortresses crowded with flying buttresses, and huge cities filled with crowds and airships flying overhead. 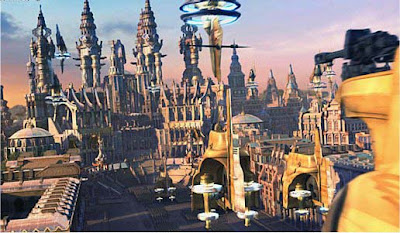 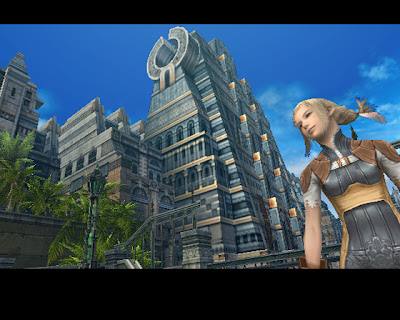 And the character design is also very nice. I mentioned some of the goofier aspects above, but they sort of fit in among the baroque designs of buildings, not to mention the crazy armor sported by some of the imperial troops: 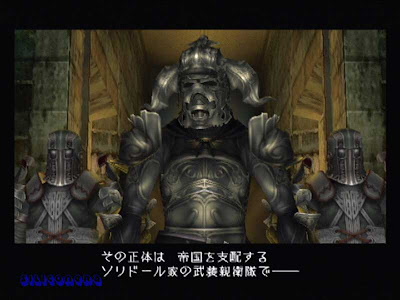 Really very cool. I found lots of neat images, so I'll probably post them with commentary sometime in the future.

Ah hell, here's some other images I felt like showing: 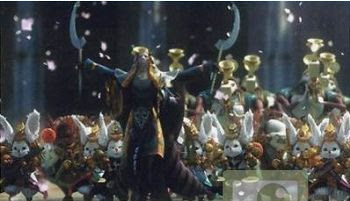 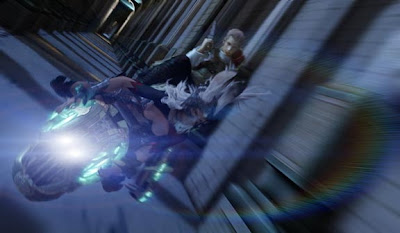 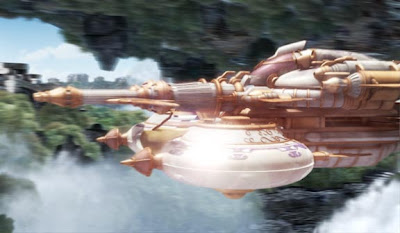 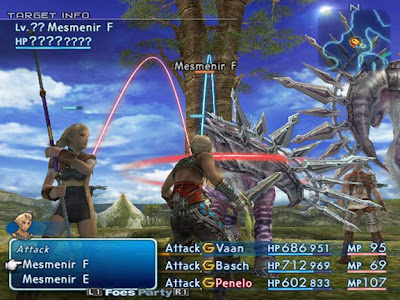 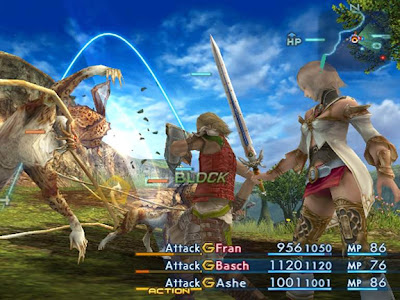 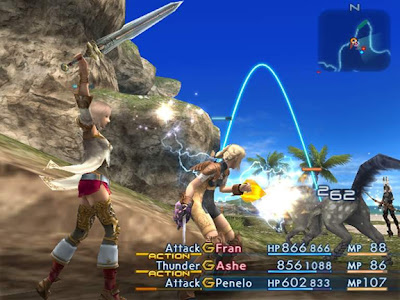 These last two show off Ashe's silly miniskirt. You can even sort of see her underwear in the top one (snicker snicker)!
-----

Okay, that's all for today for FFXII. As I keep playing, I'll probably do more posts about it. And I have other stuff to talk about, so stay tuned!
Posted by Unknown at 2:31 PM