Catching up on the notation of deaths

I'm late getting to this, since the next volume comes out this week. But here it is anyway: 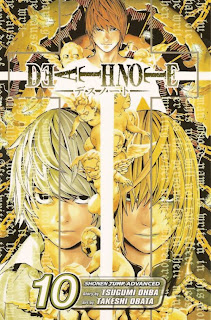 There's some pretty enjoyable stuff in this volume, but it seems like mostly setup for the next volume, and the end of the series, I guess. We've got Light handing off the Death Note to a Kira "worshipper", the continued distrust of Light's crew, and Near and Mello getting closer to the truth about Light and Kira (and L). Of course, this probably doesn't make any sense if you haven't read any of the series, in which case you can check out my other reviews by clicking the "Death Note" label at the bottom of this post.

Anyway (SPOILERS for this volume from here on out, by the way), there's some good moments, including Night callously throwing away Misa's sacrifice in order to give the Death Note to somebody else. I'll laugh if he gets her to make the trade for the shinigami eyes again, only to drop dead soon after that from bargaining half her lifespan away too many times. This is how obsessive this manga makes me: I started calculating what Misa's remaining lifespan might be at this point, since she's traded half her lifespan away twice now. For instance, if she made the first trade at age 18, and she was supposed to live to be 70, she would then lose 26 years of her life, making her die at 44. Then, if she made the second trade three years later, she would lose 11.5 years, making her die at 33 (or thereabouts). So if she does it a third time, she'll lose six years, dieing at 27. I don't know if that would make a difference, unless we get another jump forward in time. However, let's consider if she was only supposed to live to be 50. That would make her die at 34 after the first trade, and 28 (or so) after the second trade. A third trade would make her die at 23 or 24, which is not too far off. Of course, I'm estimating ages and everything here, and it probably doesn't matter. But it's a good example of where my mind goes after reading this series.

Another good part of this volume: the religious fervor of Kira's supporters. They crack me up, going on TV and doing crazy dances to get his attention. Hilarious. I especially liked when Near threw money off the roof of his building to distract them, and it worked, of course. Schmucks. We've also got the introduction of the new guy that Light is using as a Kira surrogate. He's an interesting personality, especially in the flashback giving his "origin". I'm sure he'll complicate things nicely. And finally, we have Light callously going after Kira's new spokesperson (who has been retconned into his past) romantically, even though he's engaged to Misa. That cad!

So, good times. It's definitely ramping up for big confrontations in the final two (or is it three?) volumes. I can't wait to read the rest of it and find out what happens. Of course, I'll be disappointed when it ends, but it can't go on forever. I can always check out the anime or live action movie versions though...
Posted by Unknown at 8:41 PM