Borrowed Time: Not the fun kind of time travel 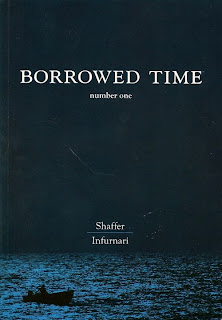 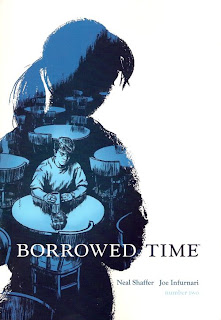 This is an odd comic, both in format and in story. Each issue is digest-sized (but not digest-length, at least in the standard manga sense); the first is 73 pages for $6.95, and the second is 56 pages for $5.95. The story concerns a journalist named Taylor Devlin who catches a ride on a ship going through the Bermuda Triangle in order to do research on a story. They run into a big storm (which was not predicted), and Taylor is knocked out. When he wakes up, the ship is deserted, and seems to be in poor repair. After a few days, he is rescued by a helicopter, but when he gets back to the mainland, everything seems to have changed. He visits a scientist of sorts, who informs him that he is now on a world that is "ten seconds away" from the one he knows. It's where items like lost keys and socks end up, seemingly on a different frequency or wavelength than the old world. He returns to his apartment and argues with a squatter, who then becomes his guide to the society in this strange place. Much of the comic seems to be about Taylor coming to terms with this new world and dealing with the reality that he can never go back.

Like I said, it's an odd book, and I ended up getting hung up on the details of this world and how it could exist. For instance, what happened to the crew of the ship Taylor was on? Did the whole ship get "lost"? If so, why didn't the rest of the crew go with it? How did the helicopter end up in the "new" world? All the buildings on the "old" world exist in the new world, along with appliances and other objects, but where does the electricity that runs them come from? I get the feeling that this wasn't really thought through, although I could be wrong; maybe Shaffer plans to answer them in future issues.

So if it isn't really about technical, science-fictiony details like that, what is the story about? Perhaps it's supposed to be about the loneliness of moving to a new city or country, or the feeling of loss after the breakup of a relationship (Taylor's girlfriend is left behind, and we see them both coping with the loss of the other). It's hard to say, but maybe the overarching theme will be made clearer in the future.

The art is very nice, and well-suited to the material. I've never read any comics by Joe Infurnari, but I know he previously worked on Caveman Robot. That series appears to be comedic in nature, so he shows his versatility in his able handling of this more serious subject matter. His scenes are full of good details, especially the trash that fills the streets of the new world: 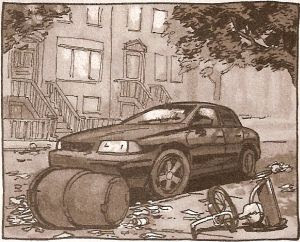 And he's good at conveying a range of expressions on the various characters. I particularly like his depiction of Taylor's confusion and anger at his situation: 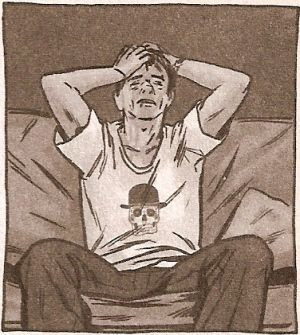 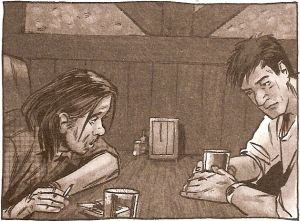 He's good at dynamic scenes, when they're called for, although most of the story has been pretty low-key so far. I really like the surreal dream sequence that opens the second issue. My only complaints would be that Taylor's girlfriend in the old world looks too similar to a girl he meets in the new world; I got confused for a second (but maybe that was intentional).

Really, it's a decent book. Other than my nitpick about the art, my only complaint is that it moves a bit slowly. With over 120 pages between the two issues, the story still seems to be in the introductory stage; it seems that it could have been tightened up a bit to pick up the pace. But maybe that's just me. So, while I'm definitely intrigued by the story, I'm not completely sold. I'll consider getting the third issue when it comes out and see what happens from there.

Thanks to Oni Press for the review copies.
Posted by Unknown at 6:03 PM