Here's some more stuff I felt like talking about regarding Heartbreak Soup (you can read my original post on the subject here).

Thinking about Gilbert Hernandez's work, I'm struck by some of the effective storytelling devices he uses. For instance, when depicting characters going about their lives, he often depicts them on the streets of Palomar, sometimes even in the background, with other characters that are unknown to us (or just not involved in the current story) in the foreground. 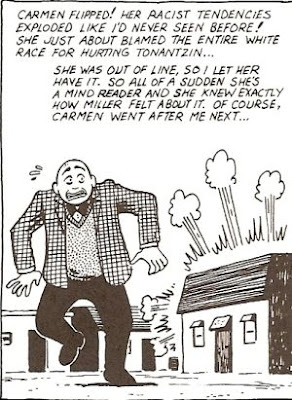 It's a great way to make the stories feel like they're taking place in a living, breathing world. It also draws the reader right into the story, making us feel like we're right there on the streets of Palomar. This feeling is heightened when characters occasionally break the fourth wall and speak directly to the reader:

Sometimes they even make use of catchphrases:

I love that stuff. Another skill of Gilbert's is his mastery of cartooning. He usually uses a fairly simple style (deceptively simple, really) when depicting people, but at times he renders the characters in more detail, creating a striking difference and setting a more serious mood: 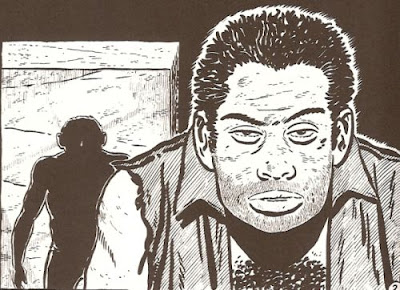 He's also great with comedy, both in depicting characters' expressions and in the use of slapstick: 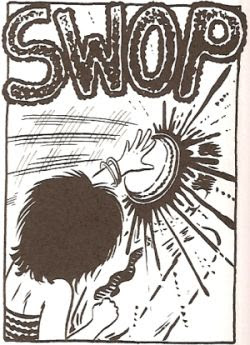 This panel starts a sequence in which Heraclio offends his wife Carmen, so she throws his dinner in his face and kicks him out of the house: 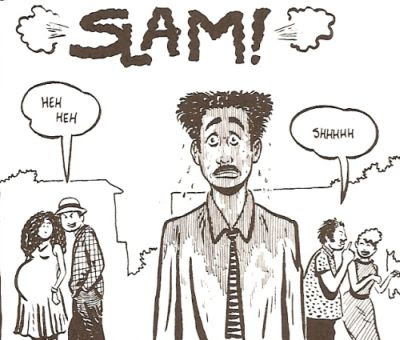 So he goes and gets drunk at a bar:

Man, that cracks me up every time I look at it. There are other times when Gilbert uses these comedic devices while telling more serious stories, and the juxtaposition is incredible, leaving the reader confused and unsure how to interpret the situation:

Like I said, Gilbert is a master of the form. And this was back in the early 80's! It's been 25 years since many of these stories, and he's only gotten better.

One final thing I'll mention is the narration. I love the conversational style of the omniscient storyteller, who at times seems like another character in the series (or maybe it's just Gilbert himself). Rather than giving dry descriptions of the goings-on, the prose conveys some great mental imagery to go along with the actual pictures. Here are some of my favorite passages:

"The sun has been a pitiless potentate these days...It's almost as if it has chosen the town of Palomar to focus its wrath upon..."

"Archie and Luba go back a few years, it's true, but despite the rumors you may have heard, they've never been lovers...This is probably one of the reasons why they get along so well (if not the reason)..."

"Many of you have felt it before...the blow. Like a large block of ice being forced against the side of your face...that dizzying feeling...nausea...you remember. Ah, to be young and in love, eh?"

"Downtown San Fideo at night! For the jaded, a shimmering, shallow purgatory...To the restless young: an oasis amid the wasteland they feel is their lives..."

So that's probably the last of my Heartbreak Soup musings, but I'm quite enamored of Gilbert Hernandez at the moment, so I might dig out some other comics I have of his to talk about them. Maybe. I've got other stuff to drone on about as well. So come back soon and see!
-----

On a separate, compensatorily-related note, maybe you could use a cash advance to collect all of your favorite Gilbert Hernandez work.  Maybe?
Posted by Unknown at 12:06 PM