To Dance: She was a dancing queen, young and sweet, only seventeen

Dammit, I planned to do more tonight, but I ended up playing Peggle all evening. Stupid Popcap, making their games so addictive! I recommend it though; it's a really fun game. Anyway, here's what I hope will be a quick, semi-relevant (in light of the Eisner nominations) review: 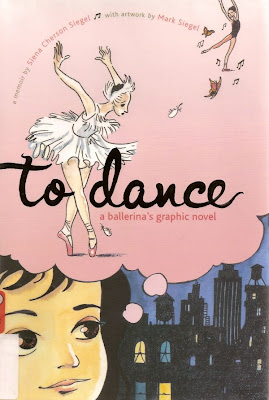 This is a kid's graphic novel, a memoir about the author's love of ballet as a child. She tells about how she liked dancing, but when she saw the Bolshoi Ballet perform "The Dying Swan", she knew she wanted to be a ballerina. So we see her go to ballet school, training very hard for years and getting to perform alongside stars like Baryshnikov. It's a pretty low-key affair, simply telling the story of her love of dancing and the work she did to be able to do so until she had to quit at eighteen due to an injury. But the great part of the story is the way her love of dancing is conveyed. You really get to see through her eyes and understand the beauty of the dance. A lot of it's about moments and memories, like the aforementioned performance that made her fall in love with ballet: 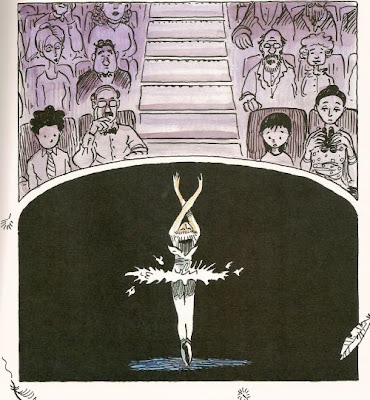 I love the way that page is laid out, with Siena and her family looking down at the performance in the panel below them. In the pages immediately following, we see her telling her friends, family, and seemingly everyone she knows about the ballet and how much it moved her. It's a scene that perfectly captures that feeling of wanting to tell people how you were moved by a piece of art.

In another wonderful moment, when Siena is attending the School of American Ballet, she gets to perform with the New York City Ballet at the Lincoln Center. During the performance, when she is not onstage, she chooses to watch from the wings rather than hang out in the dressing room with the other girls. While watching, she sees George Balanchine (a.k.a. Mister B.), the founder of the school and ballet company, watching from the other wing. It's a beautiful shared moment: 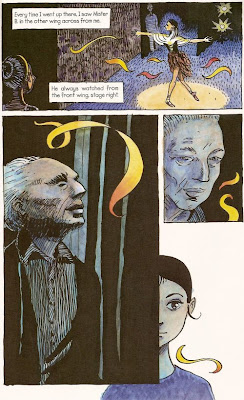 The book is full of stuff like this, even though it's only 56 pages long. As a book intended for children, it's not especially complex, but some hints of mature themes creep in, such as the breakup of Siena's parents' marriage. But it mostly just focuses on her love of ballet and how hard she worked to keep doing it.

The art fits the story very well, especially the gorgeous watercolors. It seems a bit rough and simplistic during some of the more mundane scenes, but it more than makes up for that in its depictions of beautiful performances or episodes that demonstrate Siena's love of the art form. There's a ribbon motif that is used to illustrate chapter titles, but it also shows up in the art, like in the above scene with Mister B., or in this scene right after Siena gets her first toe shoes: 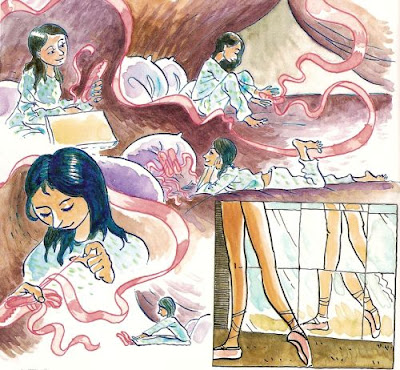 It's a very nice effect. The character art is also very well done, capturing the delicate movements of the dances.

It's a really nice book, great for kids, but adults will like it too. My wife is the one who picked it up from the library, and she loved it. I'm glad I got to read it, even if it damages my masculine credibility (which may be shot anyway).
-----

So that's one more Eisner nominee that I've read. I will have no problem if it wins, since it's a really good book.

Well, I had planned to review another book tonight, but it's past my bedtime. Tomorrow is another day though.
Posted by Unknown at 11:34 PM