Rocketo: I think "Rocket-Toe" would be a good superhero name 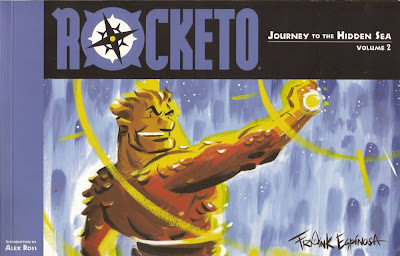 Man, this is a really cool comic book. It's kind of hard to describe, but I'll do my best. I do know that I'll have to restrain myself from just posting picture after picture, with a commentary of "Look at this! And this!"

Anyway, the backstory of the book is something about a future in which an apocalyptic event (possibly involving aliens) changed the layout of the earth's continents and destroyed the magnetic poles, rendering compasses and other traditional forms of navigation useless. In future centuries, several different types of people evolved, including bird-men, tiger-men, and mappers, people who have a sort of compass built into their right hand which records geographical data and allows navigation. The main character, Rocketo Garrison, is a mapper, and in the first volume we learned his backstory, in which he fought in a world war between two empires. He was captured, and the evil empire experimented on him, extracting the powers of his compass to use for nefarious means and destroying his mapping abilities. He retired to be a lighthouse keeper, but his buddy Spiro Turnstiles, a dog-man, sought him out and convinced him to go on an expedition to the Hidden Sea, an inland ocean that had never been explored due to killer monsters. At the end of the first volume, they had reached the Hidden Sea, but met tragedy at the hands (winds?) of an Omarylla Coil, a sort of living storm.

The story picks up again in this volume, as Rocketo ends up in a secret city at the heart of the Hidden Sea. We get even more exposition, as he learns the true history of the world, which has something to do with man's war against aliens on the moon, I guess. It's kind of hard to follow, but I just went with it and enjoyed the lovely art. Later, Rocketo has to defend the city against the invasion of the evil empire that stole his powers. Will he be able to reawaken his abilities? If you're having trouble figuring out the answer, check out the cover for a hint.

So it's kind of dense, but slogging through the strange story is worth it for the incredible visuals. Espinosa comes from the world of animation, and he brings that sensibility to his work, similar to Darwyn Cooke or Bruce Timm. But he does something completely unique, layering his art with watercolors and making it look almost otherworldly:

The crazy monsters only add to this, of course. His character work is exemplary, and he's very adept at facial expressions and body language, in scenes like this one with Rocketo and his love interest Mara: 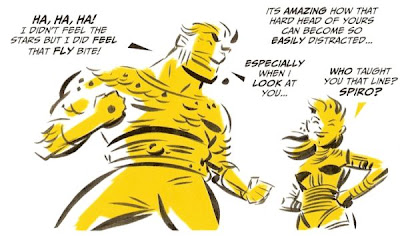 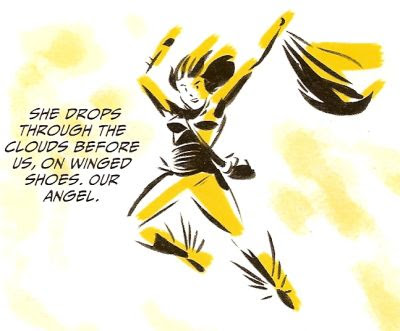 And the action! There are some epic battles in this volume, and Espinosa depicts them with amazing visual flair. Chaotic lines and colors could end up being a jumbled mess, but he is able to separate them and breathe life into what seems amazingly simple. Give him a few brushstrokes, and he makes you see a character firing two guns at a monster in the middle of a battle, along with tons of other details (click to see a larger version. Please!): 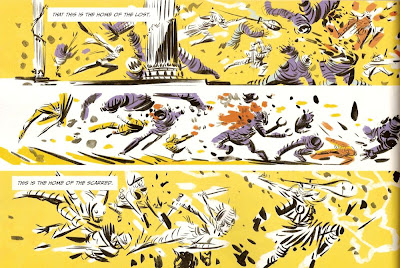 That page looks incredible, but the scene actually stretches across the page opposite. Wow. I especially love the sense of motion that you get from the art. This is only a small sampling here, but literally every page of the book is full of this expressionist beauty.

The one complaint I would have about the comic is the sometimes awkward dialogue and narration. Espinosa is originally from Cuba, and I suspect there is a slight language issue. I think it could have been perused more closely by an editor, possibly to fix some grammatical mistakes. Maybe I'm just a nitpicker, but it bugged me every time a character was addressed directly without the insertion of a comma before or after their name. But it's really no big deal, and actually, the slightly eccentric verbiage adds to the charm of the story.

And it's really a very good story, with some moments that are truly heartstopping. It adds up to a great tale, and the two volumes serve as a wonderful beginning to the story of Rocketo. Espinosa plans to follow it up with another volume soon, called "Journey to the New World". I can't wait to read it, even though it will probably not come out in collected form for at least a year. Keep up the good work, Frank!
Posted by Unknown at 10:06 PM