La Perdida: She certainly is

I've been trying to think of a coherent series of words about this book, so here's my attempt: 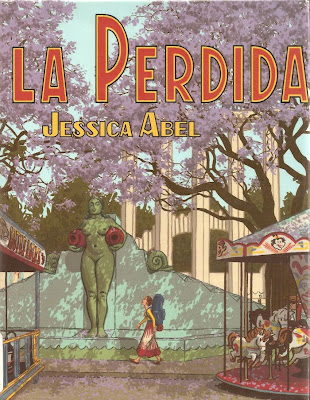 This is an excellent graphic novel, but I don't know if I can say I enjoyed it. For one, the main character is a total jerk. She's incredibly unlikeable, and probably around halfway through the book, I started to wonder if I wanted to make the effort of spending the time with her to finish the story. I'm glad I did, because you not only get to see her reap the consequences of her actions, but also learn a bit of a lesson from the whole thing. But it's still something worth talking about.

So here's the setup: Carla is a young (early- to mid-20's, it seems) half-Mexican girl who decides to go to Mexico City to "find herself". She wants to experience the Mexican part of her heritage, but it's almost painful to watch her try. First, she shacks up with an old boyfriend, and she disdains him for his lifestyle of trying to emulate his literary heroes, Jack Kerouac and William S. Burroughs. He's a rich kid living off his dad's money and mostly hanging around other American expatriates in Mexico. It drives her crazy to see him screwing around and living in a fake life of manufactured debauchery, so she kind of goes the opposite route, trying to befriend "authentic" Mexicans and rejecting any Americans she knows. She ends up hanging out mostly with Memo, a weird guy who preaches Communist ideals while selling Che Guevara t-shirts and picking up American women, and Oscar, her new boyfriend after she breaks up with Harry (her old boyfriend).

Of course, her attitude during all this is reprehensible. At first, she is disdainful of Harry for pretending to live like his literary heroes while leeching off his rich father. But she isn't much better; she wants to be more Mexican, but she mostly just goes to tourist attractions, and it doesn't help that she doesn't speak Spanish very well. Later, she learns the language better and breaks up with Harry, but then she alienates all her American friends and gets more and more isolated in her little circle of Mexican friends. I really started to dislike her when her brother Rod came to visit, and she was upset that he know other people in Mexico besides her. He had made some friends over the internet, and went to hang out with them, taking her to places she didn't know about. This upset her because she wanted to be the Mexico expert and show her brother how cool and native she was, but he managed to do it better than she did from a few thousand miles away.

And then she gets even worse, mocking her boyfriend for having dreams and aspirations that she doesn't share and throwing a fit when Memo calls her out for being a tourist and a capitalist. Then she starts getting involved with a less-savory element (Oscar's pot-dealing friends and their associates), and you know it's only going to go (farther) downhill from there.

So it's kind of hard to get through, but it's a pretty worthwhile story. I certainly can't fault Abel for making such a three-dimensionally dislikable character. The art's pretty nice too, although something about the character depictions bugged me. Specifically, I didn't especially like the way Abel depicts characters' eyes as dots most of the time: 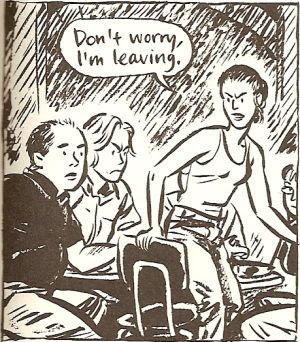 There are times when the characters are in close-up or are expressing emotion that she gives more detail and shows their whole eye: 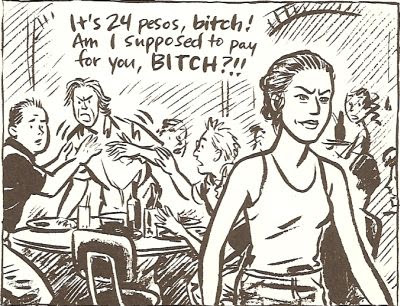 (those are consecutive panels, by the way). I think it might be the difference between those two styles that bothered me, especially when both styles appear in the same panel, as in the second example above. But it's really just a stylistic device that I don't happen to favor, so make of that what you will. Abel is actually really good at conveying emotion, and that's really important in a character-based work like this. I think the thing I like most about the art was all the little details, especially in the backgrounds: 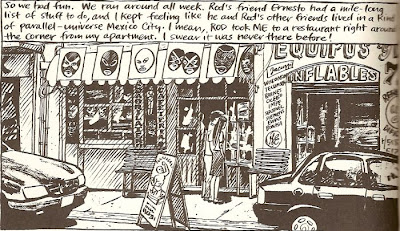 Abel is great at defining a setting, filling in all the panels with artwork that depicts the place (and characters) perfectly but doesn't seem cluttered.

One other thing to note: in the first chapter, the Spanish dialogue is written in Spanish in the word balloons, with captions at the bottom of the panels giving translations. In subsequent chapters, Abel switched techniques, putting English in word balloons, but it's meant to be Spanish, and dialogue is sandwiched between
Posted by Unknown at 8:05 PM