After my recent "dust-up" (that's actually a much stronger term than the situation warranted) with Doug TenNapel (see details here), I figured I would try to read some more of his stuff and see what I thought. So when I saw this one at the library, I grabbed it: 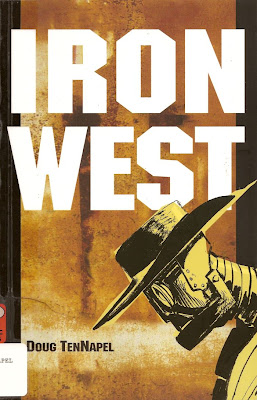 It sucks when you're wanted by the authorities for train robbery and have to flee across the Western frontier. But when robot cowboys show up, intent on killing all humans, that can really ruin your day. It helps if you have some backup to help you fight them, especially in the form of a sasquatch, but fighting your cowardly nature so you can try to rescue the woman you love doesn't make this sort of thing easy. That's what Preston Struck has to deal with in this goofy sci-fi western, and following him on his adventure sure makes for a fun ride.

TenNapel's cartooning is what really brings the story to life; I'm impressed by how it looks rough and sketchy, but is really very clearly defined. I especially like stuff like his expressive faces and gestures: 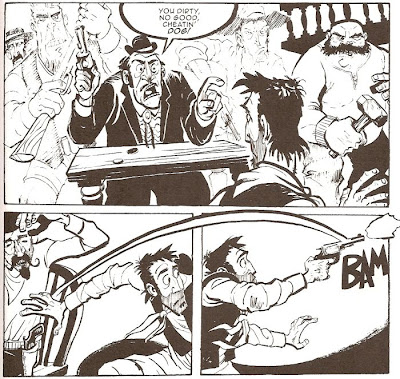 Or his designs for the robots and other various creatures:

I like the costumes the robots wear. I have no idea why they would dress up like the humans they apparently hate, but it sure makes for a great visual. And TenNapel's sense of humor adds a lot to the story as well; I liked the scenes where Preston keeps trying to make the sasquatch (whom he calls Mr. Squatch) smile, and the revelation of the robot cowboys' natural enemies leads to a pun that is simultaneously horrible and hilarious.

He also stages the action very well, building up to an epic final confrontation featuring hordes of mechanical creations, the sasquatch doing kung-fu and pro-wrestling moves, and the bad guys' leader (called the demi-urge) transforming into a giant train-bot: 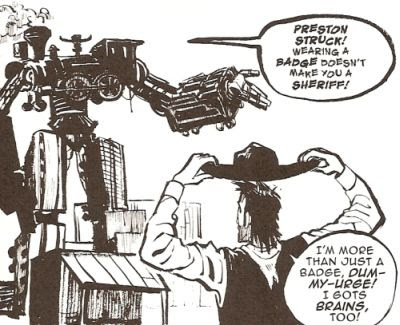 It's quite satisfying, and I think I read the whole book with a big smile on my face. If you've never read any of TenNapel's stuff, check this one out.
-----

I just finished reading another book today that I want to talk about, but I probably won't get to it until tomorrow. So come back then!
Posted by Unknown at 5:55 PM