Wait, I think that title is taken. Whoops! But it sort of applies to this comic: 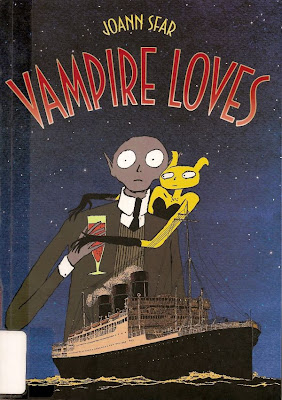 I actually enjoyed this quite a bit. It's a perfectly inconsequential series of stories about Ferdiand, the titular vampire, and his search for love, or something. It has kind of a European sensibility, with various events taking place, but not much of a beginning, middle, or end to the book, or to any of the stories within. But that's okay; it seems more like a rich world that Sfar has created, full of strange creatures for his lovelorn bloodsucker to interact with. For instance, there's Lani, his ex-girlfriend, a mandragora: 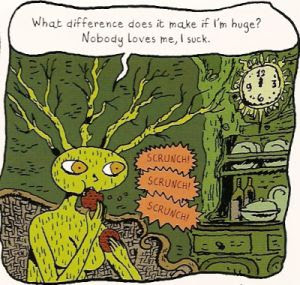 Their mutual friend, the Tree-Man (who has a crush on Lani): 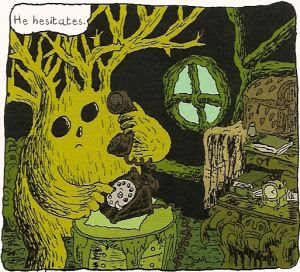 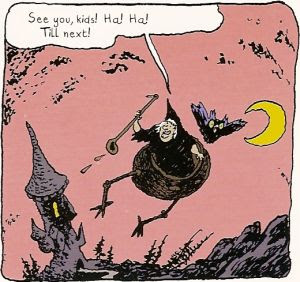 and a girl vampire named Aspirine (who has a sister named Ritaline): 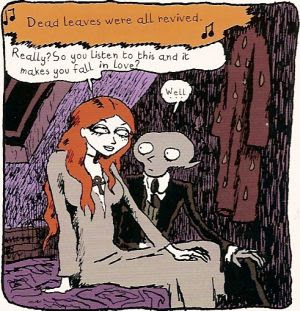 I think she's really cute with those freckles. Of course, I'm not mentioning all wild creatures that fill the backgrounds, especially when Ferdinand goes out to nightclubs to try to pick up girls. And then there's a chapter when he goes on a cruise populated with all sorts of crazies, like a guy who turns into a werewolf when he sees pretty girls (i.e. when he gets aroused): 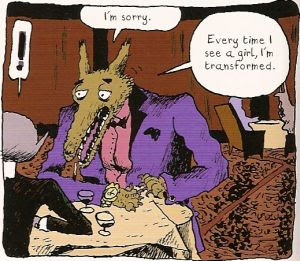 And a phantom named Sigh: 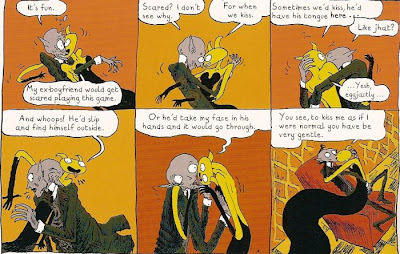 That's a surprisingly sensual scene in which she and Ferdinand make out while morphing through each other's bodies. (On the cruise, Ferdinand also gets caught up in some sort of ongoing duel between a mummy and a monster hunter named Professor Bell. I was glad to see that Sfar continues to tell of these characters' adventures in other books, including The Professor's Daughter, which I recently acquired but have yet to read).

The thing is, all these characters are really well-realized, feeling like real people. So it's fun to see them go through their lives and interact with each other. Plus, their problems are so mundane, which contrasts with their fantastical nature. I can relate with stuff like trying to find somebody to love or having a disagreement with a friend. It ends up being a fun time with interesting people.

When I initially encountered Sfar's work, his rough art style turned me off. But it's grown on me; I kind of like it now, and it fits the stories that he tells. I like the way Ferdinand is usually drawn simply, with a flat grey color to his skin, but sometimes we see him in the shadows and he looks more monstrous and Max Schreck-like: 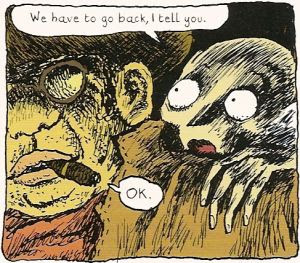 I like the way Ferdinand's cat looks like The Rabbi's Cat (Ferdinand even gets to meet and hit on a girl that looks like the rabbi's daughter). I especially like the scene where Ferdinand is in a tight spot, and on the next page we see Sfar at his drawing board, saying "I'm going to string out the suspense a bit and tell you about Lani and the Tree-Man", before being interrupted by Ferdinand's escaped conscience, whom he forcibly shoves back into the panels of the story. Fun stuff.

It's a really enjoyable book, and it's made me even more interested in Sfar's work. I believe it's actually the first volume in a series, so eventually I'll get to read more of Ferdinand's adventures, a prospect that makes me happy.
-----

Okay, I think that's it for tonight. The next post is the special one, so watch for it!
Posted by Unknown at 8:14 PM