I'm late on this, but here are my thoughts on books I liked from Free Comic Book Day 2007. I didn't get the Peanuts book, which was too bad, and I suppose I could have read the Spider-Man book, but not getting that one is no big loss. But here's what I did like: 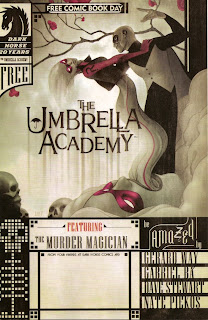 I was a bit skeptical about this, because who would expect a cool comic from the frontman of My Chemical Romance? But this was actually pretty fun, and it's sold me on the upcoming miniseries. Good job with this one, Dark Horse. The book is about a team of superheroes (or supernatural detective types, at least) who attend the titular school. Here's a scan of the title page, which gives a goofy description of each character that sounds like it was translated from Japanese (click to enlarge): 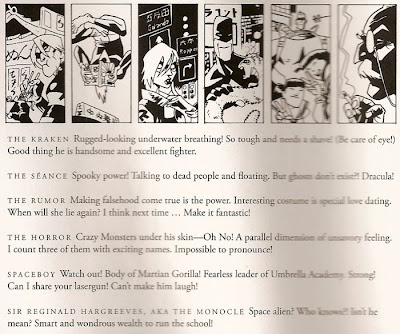 The story involves the team's discovery of the dead body of one of the members (which is odd, because she is also at the scene, alive) and their subsequent confrontation of the villainous Murder Magician, who is making a talk show appearance. It's a short story, which fits a free giveaway, but the dialogue and art are quite good. The whole thing reminds me of Matt Fraction's writing on Casanova, but that might just be because the art here is also by Gabriel Ba. Dave Stewart's colors really liven the art up though. Here's a good sample: 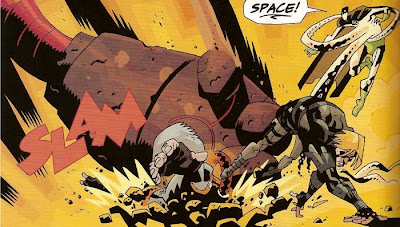 Awesome. And the writing is good too, with lines like, "The Murder Magician's hypnotized Lucifer Clark and his audience, and set a murderbot to 'careless brutality'". Lots of fun; I'll definitely be checking out the miniseries, whenever it shows up.

The book also has previews of Pantheon City and Zero Killer. The former is a futuristic tale by Ron Marz and Clement Suave. The art looks nice, but I'm not exactly a fan of Marz's writing, so I kind of doubt I'll pick it up. As for the latter, it's written by Arvid Nelson, who created Rex Libris, which I've never read but hear is really good. Art is by Matt Camp, and it seems nice enough. It's something about a post-apocalyptic New York overrun by weirdos, and the short story here doesn't really do anything for me.
----- 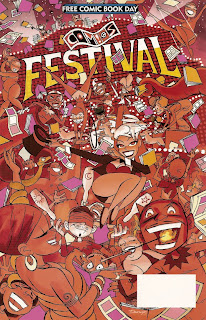 This is a sampler of various Canadian artists who (I assume) will all be attending or participating in the Toronto Comic Arts Festival. Lots of nice pieces, including a couple Scott Pilgrim-related stories by Bryan Lee O'Malley, a nice story by Darwyn Cooke (who also contributed that awesome cover), an Apocalypstix short featuring art by Cameron Stewart, several pages of snow-related poetry by Hope Larson, a beefcake-laden sci-fi strip by J. Bone, and a "Monster Cops" one-pager by Chip Zdarsky. Cool stuff! There's other stuff too, but those were my favorites.
-----

The Train Was Bang On Time
By Eddie Campbell 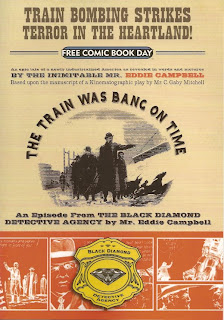 This was one of the ones I wanted to get most, and now it has me really excited about Eddie Campbell's new book, The Black Diamond Detective Agency. This is an excerpt from that book, and it looks really nice, with color and everything. I had a bit of trouble following the story, but I'm hoping that won't be a problem with the full book. It involves the bombing of a train and the false(?) accusation of a man who ends up going on the run from the titular (I like that word, if you can't tell) detective agency. As for the art, it's very nice, of course. I was especially impressed with the double page spread of the explosion; I was tempted to scan it and show it here, but it works best as punctuation against the art on the pages surrounding it, with stark black lines on a bright red background. Instead, I'll show this image of the aftermath: 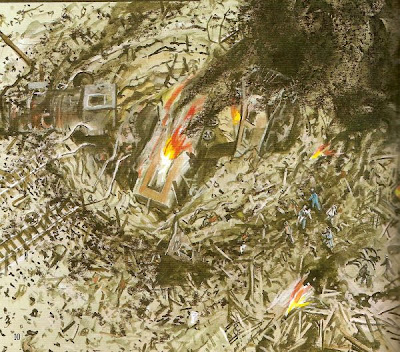 I love Eddie Campbell's art and writing, so I'm really stoked to read this in its entirety.
----- 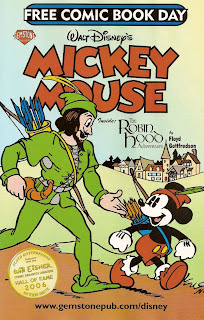 Before I got into superhero comics in my teenage years, I used to read Disney comics voraciously, especially those starring Donald Duck and Uncle Scrooge. But there was one story in an issue of Walt Disney's Comics & Stories that I really liked; it was a reprint of an old Mickey Mouse newspaper strip story, with Mickey discovering a floating island and fighting his nemesis Big Bad Pete for control of its scientific advances. The story was by Floyd Gottfredson, of course, and the fact that it has stuck with me is a testament to his skill. He wrote and illustrated the tales of Mickey Mouse back before all the sharp edges were filed off the character; these days Mickey doesn't really have a personality, but back then he was irascible and temperamental, seeming to pick fights at the drop of a hat. I would love to read a treasury edition of Gottfredson material, but stuff like this will have to suffice for now. In this story, Mickey invents a chemical that increases and reduces the size of plants. It also affects living things, enlarging a fly to the size of a cat and shrinking Mickey to the size of, um, a mouse. He ends up taking refuge in the pages of a book, and he ends up stepping right into the pictures and entering the world of Robin Hood. Hey, why not? (or, as Chris Sims might say, because Floyd Gottfredson, that's why). He ends up joining Robin Hood's band of merry men, robbing travelers and rescuing maidens (although nothing turns out like he expects it to), and it's all a bunch of goofy fun until it gets too intense for him and he has to leave. I love the crazy stuff that Gottfredson comes up with, like the scenes of Mickey fighting:

Or the way Pluto is freaked out by Mickey's antics: 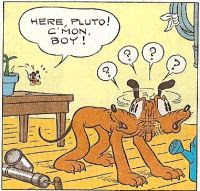 We also get another story, about Mickey's rival for Minnie's affections, Mortimer. In one scene, Mortimer plays jokes on Mickey and makes him look like a fool. So Mickey bets him he can make Mortimer fall over without touching him:

Ah, a classic gag. Man, I need to look and see if this stuff is available in collected editions.
-----

So that's the stuff I liked. I also enjoyed the Nexus book, but that's because I've never read any Nexus, and it helped me get caught up. Now I might actually read the upcoming series. I got the Owly book for my wife, and she was pretty excited. I tried reading it, but man, it is just not my style. So that's pretty much it. I should be back tomorrow with other stuff to talk about. Stay tuned!
Posted by Unknown at 7:56 PM