Not too much to talk about with this week's comics

Maybe I'll mention a few others in more depth tomorrow or whenever, but for now, here's some (probably) short thoughts on comics that came out this week: 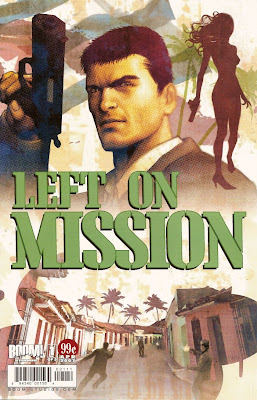 I wasn't sure if I was going to get this one, but the 99-cent price for the first issue made it hard to pass up. And it was definitely worth it; it's quite possible that I'll buy the rest of the series. It's a spy story about a couple of agents out to take down a former agent in Cuba. They get ambushed by a couple goons and have a chase/firefight through the streets of Havana. It's nicely-done action movie stuff. The art works, but it's nothing to write home about. At the end of the issue, the rogue agent is still at large, and one of the other agents is going after her on his own; the two of them used to be an item. Will he bring her in or join her and make a run for it? I just might follow the miniseries and find out.
----- 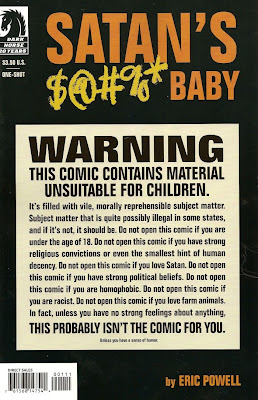 That's the jokey cover, by the way; here's the "real" cover, which is inside the first one: 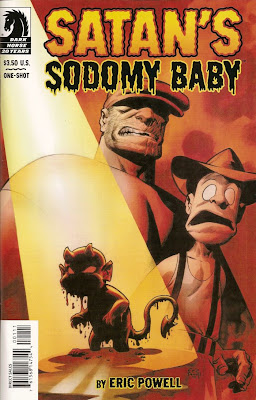 I love Eric Powell's art, and his writing is quite hilarious, but this is certainly not his best work. His jokes work best when centered around a plot, and really, all the plot of this book is right there in the title. From what I've heard, this whole thing came about because Powell was going to use the title for a regular Goon story, or at least as text on the cover of an issue. But Dark Horse wouldn't let him use the word "sodomy" on the cover, so he turned it into a joke in the issue, saying that a religious woman named Margaret Snodgrass had caught wind of the comic and campaigned to Dark Horse against it. He exhorted readers to write in and demand that the book be published. I guess lots of readers took the whole thing seriously, judging by the letters printed in the back of the book. Some of them even quote legal precedents and go on long screeds against censorship. It's quite odd to see this much energy expended over butt-sex jokes. And to tell the truth, I think Powell's playing the whole thing for laughs, but like I said, his stuff is funnier when it has more of a "point" (if zombie-killin' counts as one). The plot is simple: a hillbilly gets raped by Satan, then delivers a buck-tooth, red, horned baby that has a disproportionately large, fire-spewing penis. The Goon and Franky want to get rid of the baby, so a priest decides that abortion is the answer, and you can probably figure out where it goes from there. The whole thing is almost calculatedly offensive (Bestiality? Check. Pedophelia? Check. Abortion? Check. Obligatory Exorcist reference? Check.). It's enjoyable enough if you like that sort of thing, but I for one will be glad when Powell gets back to doing regular issues of the series. But what the hell, here's a sample image, from a scene in which Franky goes to try to find religion:

Actually, I'm not going to do a full review of this one. It's Warren Ellis, zombies, action, violence, etc., etc. If that sounds like something you like, go for it. I just wanted to share this image: 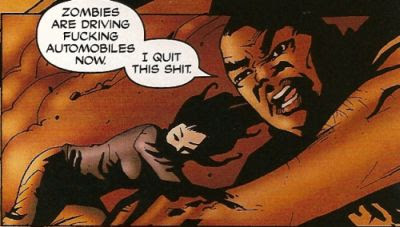 One more issue to go in the series. It's all right, but it probably won't knock your socks off.
-----