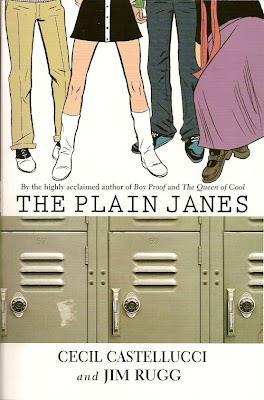 Or is the title supposed to the The P.L.A.I.N. Janes? I guess it doesn't matter; I'll go with the one that's easier to type. This is the premier book in DC's new line, Minx, which is aimed toward teenage girls. So, as a dedicated reader of Shojo Beat, this seems right up my alley. And sure enough, I enjoyed it quite a bit.

It's a really well-written book, with engaging characters that I imagine kids will be able to relate to. Here's the story: Jane is injured in a terrorist bombing in Metro City, the metropolis where she lives. Her parents decide to move to the small town of Kent Waters, where things are safer. At first, Jane hates it there; she doesn't know anybody, and compared to the exciting city where she could indulge her artistic nature, there is nothing to do. But soon she befriends a group of other quirky girls who all happen to share a variation of her name (Jane, Jayne, and Polly Jane), and they start trying to bring some life to the small town, forming a group called People Loving Art In Neighborhoods, or P.L.A.I.N., and doing "art attacks", semi-vandalistic art installations intended to make people happy. Of course, the authorities (not to mention Jane's parents) don't like this sort of thing, especially in the current climate of fear of terrorism, so problems ensue.

I think the thing I like most about this book is the fascinating, three-dimensional character of Jane. As the narrator of the book, she tells us right off that she loves art and prefers to hang out with the quirky types rather than the popular crowd. But we quickly learn that she wasn't always that way. In fact, it was her experience in the bombing that changed her; a young man nearby was put into a coma during the bombing, and Jane sort of befriended him (even though he couldn't return her friendship), visiting him in the hospital regularly. 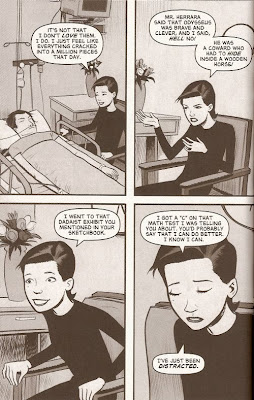 She doesn't even know his name (he didn't have any identification on him), so she refers to him as John Doe. He had a sketchbook labeled "Art Saves" on the cover, and looking through it was what got Jane interested in art. 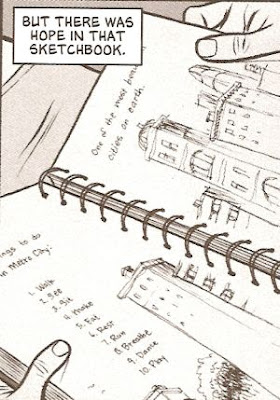 She ended up taking it, promising to fill up the empty pages with drawings of her own and return it to him. The trauma of the experience (the bombing, not the sketchbook) kind of made her change her whole persona, as teens sometimes do, cutting her hair short and dying it from blond to black. This alienated her friends, so she found herself distanced from them even before she moved from the city. So as much as she complained, it was really a great way for her to make a fresh start. The next fall, she gets the opportunity right away to be one of the popular kids when a cheerleader welcomes her to the cool kids' table in the lunch room; but she is trying to divorce herself from her previous life, so she declines and sits with the Janes. I found it fascinating to watch as she goes through the teenage stage of reinvention, trying to find out what works best for her.

Jim Rugg's art also really sells the details and personalities of the characters. I've liked him ever since I read Street Angel, and while this is a more character-driven piece free of the frenetic action he used to effortlessly splash all over the page in that series, it still suits his talents very well, giving him a chance to show his flair for body movement and facial expressions, as well as the occasional creative layout: 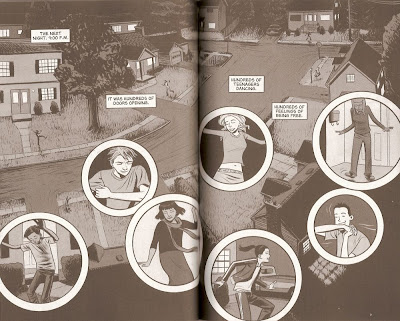 The setting of the book is also pretty interesting. While it's different from "our world" (we haven't had any terrorist attacks in the United States since September 11, 2001), it gives the story an effective atmosphere. We see hints in background information such as newspaper articles that there have been more bombings since Jane's family left Metro City, so it's understandable that all the adults are on edge, especially Jane's parents, who have to be really freaked out after almost losing their daughter. Aside from one scene that's a bit on the nose (Jane's mom, who used to love watching clouds, now finds them sinister), I found it very realistic. And it's a great catalyst for some later scenes in which the whole school basically joins P.L.A.I.N. in protest over a curfew intended to curb the art attacks. It's very nicely done, and sets up a sense of urgency for the climax.

Unfortunately, said climax leads to my only complaint about the book (one shared by other reviewers, from what I've read): the ending, or lack thereof. There's really only minimal resolution to any of the plot; the story seems to just cut off when there is still more to come. It's rather bizarre, and the only possible reason for this that I can come up with is that DC hopes to turn this into a series. At least, I hope that's the plan. I would certainly welcome more stories about this group of girls, and I think books delving into Jane, Jayne, and Polly Jane's respective obsessions with theatre, science, and sports would make for great reading. Please, DC, make it happen!

But the ending is really just a small part of the book, of course. For some, a poor ending can completely ruin a book or movie, probably because it's the last impression of the work. But I like to try to consider the entire work, and in this case, it's well worth the time spent reading it. I definitely recommend it, for fans of well written comics, as well as the actual target audience (not that those groups are mutually exclusive).
-----

I also wanted to say a few words about the previews for upcoming Minx books in the back of this book. The only one I'm sure I want to read is Re-Gifters, so I just sort of skimmed that excerpt. While I generally like Andi Watson, I'm not really a fan of Josh Howard, so I haven't been excited about Clubbing. But the preview looks fairly decent; I may consider getting that one. I'm interested in the concept of Good As Lily, but Jesse Hamm's art isn't grabbing me. Not that it's bad; it just isn't getting me excited for the book. Plus, the preview is odd; it seems to present some out-of-order pages, or skip some pages in the middle of the excerpt. We also get cover images and short summaries of three other books: Confessions of a Blabbermouth, by Mike and Louise Cary and Aaron Alexovich; Water Baby, by Ross Campbell; and Kimmie66, by Aaron Alexovich. I'm interested in the Ross Campbell book (he seems like a rising star in comics), but I don't know anything about Aaron Alexovich. Does anybody have any information about him (assuming he's male)?
-----

More content tomorrow, although I don't know if I have any actual reviews planned. Rather, it's solicitation week, so I'll do my usual look at stuff that will eventually come out. Be there!
Posted by Unknown at 10:20 PM