In which I display more girlish tendencies

I'm going to try to make this a monthly "feature": 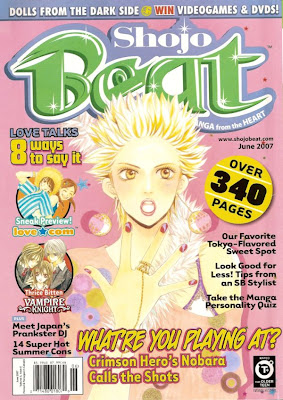 This month I'll just concentrate on the stories I liked (including the preview chapter), although I should mention that I was glad to see some article illustrations by Takeshi Miyazawa:

And here's a panel from Baby & Me that made me smile (by the way, click on any pictures to enlarge, and remember to read right-to-left): 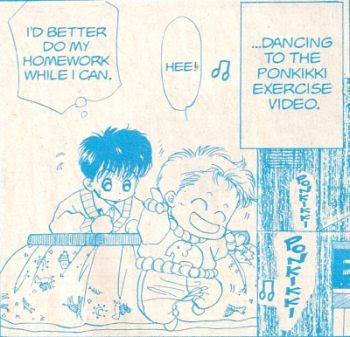 Okay, on to the reviews! (By the way, if you want to know the backstory of the various series that I talk about, click the "Shojo Beat" tag at the bottom of this post to see previous posts about the magazine). First up, a preview of an upcoming manga series:

Actually, I don't know if that's the official title, or if it's supposed to be Love.com, or Love*Com, or what. The editorial and other text pieces in the magazine put a five-pointed star in between the words, and one promo image contains the words "loveloy complex" (with a star between them). Whatever. Anyway, the series seems to be based on Japanese-style comedy duos (manzai) that are popular on TV over there. There's an article in the magazine informing readers about this tradition (including a sidebar of comedy "techniques" that includes catchphrases, over-the-top reactions, slapstick, and making fun of others. Sounds like regular comedy to me), which, while comedy can be fairly universal, makes me wonder how well a lot of the material in this strip translates. For just one example, there are translator notes stating that the series is written in an "Osaka dialect", and while I'm sure they tried to come up with an English equivalent, I don't know if they succeeded.

Anyway, the plot of the series involves an unnaturally-tall high school girl who is always getting in arguments with a boy who is unusually short. People think they are very funny and compare them to a famous comedy duo containing a tall member and a short member. They are also rumored to be dating, which is a mortifying idea for each of them. They both end up having to go to summer school and developing crushes on other members of the class. So they end up becoming friends and teaming up to help each other in their quests for love. It's actually pretty charming, and the characters are likeable and have actual personalities, which is more than can be said for a lot of manga characters in similar series. The art's pretty nice too; it's clear and easy to follow, with good, funny facial expressions and body language: I just feel like it's got some culturally-specific jokes that I'm missing. So, it's a series I would probably have no problem reading if it was serialized in Shojo Beat, but I don't think I'm going to rush out and pick up the digest collections.

In the previous chapter, Riiko's friend/wannabe-lover Soshi found out that her boyfriend Night was a robot, and he was upset. So this chapter sees them arguing over the situation, with him getting all emo over her picking a non-human lover over him. 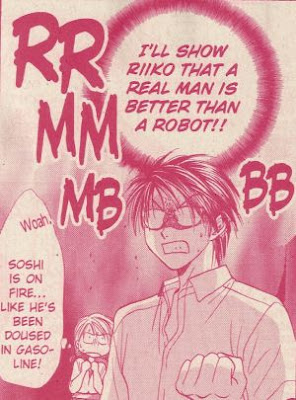 Then, in a weird twist, Night (who is in the shop for repairs after being damaged in a fight) shows up again: 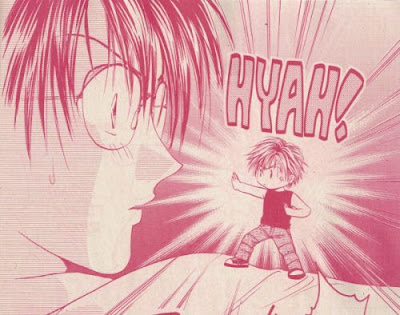 Is that the shojo form of fan service? Adding a super-cute mini version of a character to the cast? Who knows how long this will last, but for at least the next chapter or so, Night will be hanging out with Riiko and Soshi in miniature form. Watase is good at coming up with silly twists like this, and they fit pretty well in a series filled with slapstick comedy. We'll see where she goes from here, especially since the chapter ends with Soshi informing Riiko that she will have to choose between him and Night. Duhn duhn DUHN!

So, Hachi (a.k.a. Nana) is sleeping with Takumi, the famous guitarist of the band Trapnest, but she actually likes Nobu, the guitarist of her roomate(also named Nana)'s band The Black Stones (or Blast). And Nobu likes her back, but he feels like he can't compete with Takumi. Blast has been busy figuring out a record deal, so they haven't been spending time with Hachi, and she's lonely. But Nana feels bad about ignoring Hachi, and she wants to help them get together. Here she is informing Nobu about Hachi's big plans for a party after their show (they blew her off to party with a record exec): 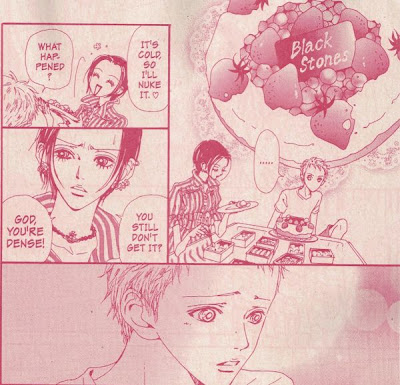 Yazawa really captures the characters' personalities in those few panels, from Nana's abrasive, obnoxious nature (rather than just tell Nobu about Hachi, she brings over the leftover food from the aborted party and plops it down on the table in front of him) to Nobu's sad expression of realization. Nicely done.

Later, the band gets together to discuss whether they want to sign with the record label or not, and it's a fun discussion that lets the characters' personalities shine through, especially since Hachi and Misato (another fan of the band) are present. Hachi gets to make an impassioned speech defending Nobu's songwriting ability: 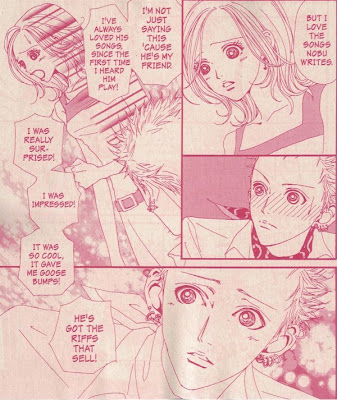 How sweet. Then Shin, the young bassist, convinces Hachi and Nobu to go out together to buy beer. Sneaky, sneaky! We also get some other subplot development in the chapter, including the burgeoning relationship between Shin and Reira, Trapnest's singer. But the real meat of this chapter is seeing what happens between Hachi and Nobu. It's a total soap opera, and Yazawa is good enough at this that she's sucked me right in. I'll be waiting excitedly for the next chapter.
-----

I'll save any discussion of this month's Crimson Hero for next month. It was kind of a slow chapter, without much that I felt warranted commentary. And the less said about Yumekira Dream Shoppe the better. Ooh, and I'm also excited about the upcoming excerpt of Osamu Tezuka's Princess Knight in next month's issue! I'll be sure to talk about that one when I read it.
-----

That's all for today. Eh, I'll probably have more stuff to talk about tomorrow. We'll see.
Posted by Unknown at 6:15 PM