Sorry for the overuse of "-ish". Anyway, I thought there were some good comics this week, but I don't have too much to say about many of them. So some of these reviews will probably be kind of short. 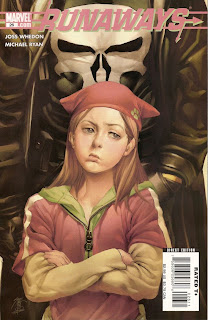 Well, this was kind of disappointing. The characters seem a bit...off. Which I suppose is to be expected when written by a different person, but it was bad enough in this case that it bugged me. Examples: The Punisher provides some narration, which is started with the heading "Punisher's War Journal: ...". Does the Punisher actually keep a "war journal"? Later, he gets punched, and a caption reads "Punisher's War Journal: Hhhhhhhhh...". Yes, that's a joke, but it's not a very good one, since it makes me think the Punisher is recording his actual thoughts. Another silly caption gag is when the Kingpin is thinking about the whole situation while he's eating a chocolate bar, and he stops in mid-thought to think "mmmm, chocolate". I almost get the feeling Whedon is "talking down" to his audience, which he seems to think are children.

Back on the topic of the Punisher, he confronts the team at one point, and says he attacked them because they were commiting a crime: theft. So, does that mean he goes around firing rocket launchers at whoever he sees staging a break-in? Even if they're children? Oy. Luckily, we do get this panel: 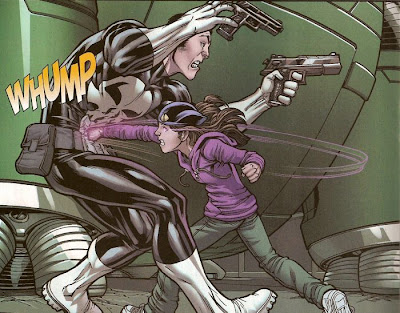 Which is probably the highlight of the book. There's also this gag, which made me laugh: 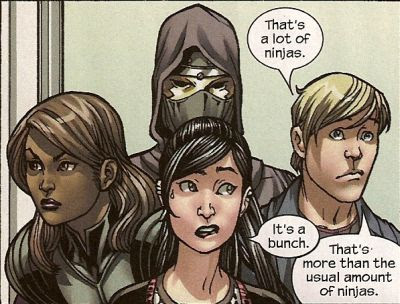 And there was a good line by Molly, when she was amazed that she predicted exactly how Chase was able to save himself from dying: "Why aren't you awesomed by me?"

One other complaint: wonky anatomy. Look at these panels: 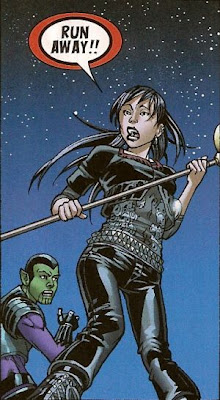 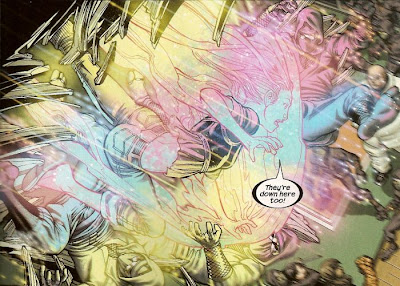 In the first one, I don't know what is going on with Nico's legs, and in the second one, Karolina seems to have bent her spine sideways at an impossible angle. I realize weird spinal contortions are commonplace in superhero art, but that's usually for the sake of cheesecake, and I don't think that's the intention here. Huh.

Anyway, there were some okay moments in the issue, but it's becoming apparent that it's all a setup to get to the events of the next issue, which can be guessed by looking at the cover. That could be entertaining, and we'll see next month, but I don't like some of what was done to get there. I really wanted to like Whedon's run on the book; we'll see if it ends up getting better or not.
----- 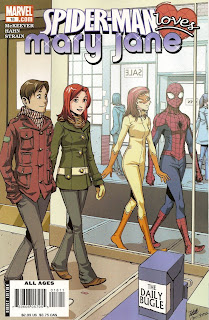 I do love this book, but there was a quirk of the art in this issue that bugged me. I'll get that out of the way first; Hahn changes the way he draws lips halfway through the issue. In the first half, he continues what he had done in the previous two issues, drawing a line for the mouth, with colorist Christina Strain adding color to define the lips: 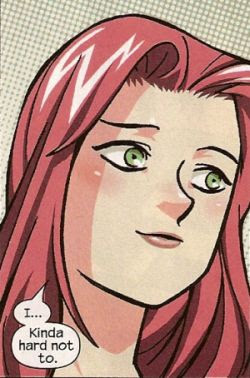 But later, he draws the outline of the lips, which I think changes the look of the characters' faces, almost making them look like different people: 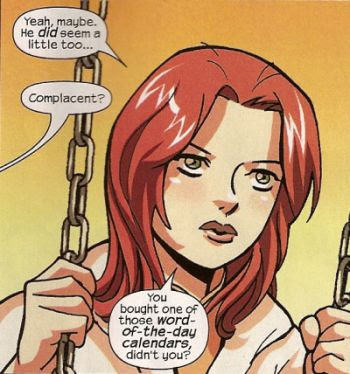 Weird. I prefer the former style, but I would have been okay with the latter. But switching between the two styles in the middle of an issue is a bit jarring. One thing that Hahn has done since he came on to the title was to sort of "transition" between Takeshi Miyazawa's art style and his own. But a change as drastic as this one should have been done between issues, in my opinion.

Okay, now that I've got that nitpick out of the way, let me say that the writing continues to be excellent. In this issue, I like the way McKeever draws a parallel between the relationships of Mary Jane and Peter/Spider-Man. M.J. is dating Harry, but doesn't want it to get too serious, presumably because she really wants to date Peter. But she is still friends with Harry, and helping him deal with his relationship with his father is bringing them closer. At the same time, Spider-Man is dating Firestar, and she wants to get closer, going so far as bringing him to her house and revealing her secret identity to him. That's too much for him, because he really wants to be with Mary Jane. It's nicely done. Good old teen soap opera.

So, does anybody know what is going to happen to the title when McKeever leaves to write for DC? I haven't heard any news. Whatever they do, I hope they don't give the title to Jeph Loeb.
----- 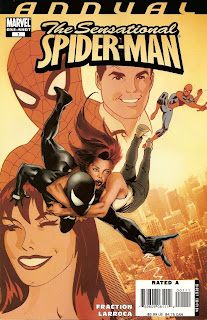 This is a pretty nice story. I think I read on Matt Fraction's blog that he wanted to write a superhero love story, and he did a good job, affirming that Peter and Mary Jane's marriage is a good thing. I like the way the two of them ponder memories of their relationship (with really cool flashback art in which Larroca apes the styles of John Romita, Sr. and Ross Andru) and reveal how much they love each other. It's all mushy emotional stuff, and it's great. We get one action scene, and it was slightly hard to follow, but I got the gist of it well enough. I think it's a pretty damn nice story. Well done, Fraction.
----- 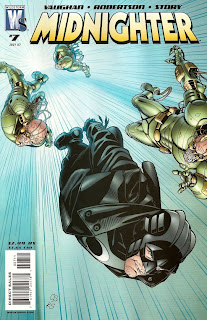 Well, I decided to drop this book after this issue, and it's a good one to go out on. In an effort to evoke the Midnighter's power of knowing how things will turn out, Vaughan structures this issue in reverse, with the first page of the comic being the last page of the story, the preceding page following it, and so on. It could have been gimmicky (and it still is, really), but it's executed very well, and Vaughan even throws in a few clever jokes, like Midnighter making a reference to a criminal organization collapsing like a house of cards, when we've already seen the collapse of a literal house of cards on the first/last couple pages of the story. I don't think the story would flow very well if put in the "proper" order, but that doesn't really matter. It's a nice single issue, and probably a good place to stop reading the series.
----- 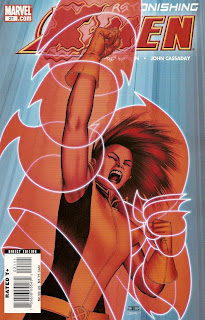 I like that cover. Unfortunately, Armor (which is kind of a "blah" codename) doesn't get much time in this issue, but whatever. It's a pretty good issue, although it suffers from being in the middle of the story arc; it mostly takes up time moving characters into place for big future showdowns. However, we do get some good character moments (I especially like Scott and Emma having an argument in the middle of an airship firefight), including this one: 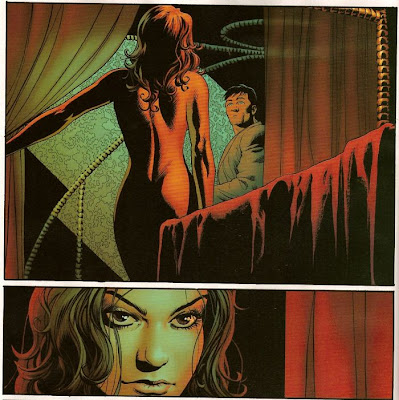 Wow, Kitty Pryde naked and making "bedroom eyes"? That'll have 80's X-Men fans in a tizzy! I also liked the bit about the "Breakworldian" rebels that are ostracized because they actually experience empathy and compassion; their leader thinks this might be a mutation. That's a nice way to tie this story into the general theme of the X-Men, rather than just being an "X-Men in space" tale. Well done, Whedon. Now just bring this type of writing to Runaways!
-----

The Dark Tower: The Gunslinger Born #4 (of 7)
Written by Robin Furth and Peter David
Art by Jae Lee and Richard Isanove 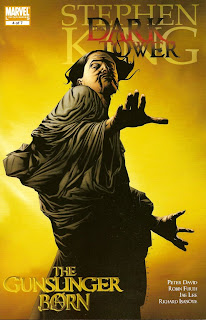 This is a decent issue, but it also suffers from "middle-of-arc-itis". The art is very nice, of course, but there's not really anything in the issue that jumped out at me as something that I should mention. I guess I'll wait until next issue comes around. Sorry for wasting everyone's time.
----- 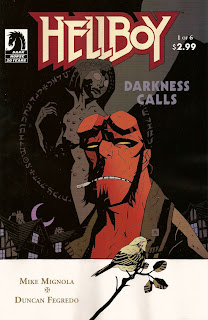 I dug this issue quite a bit, even though I'm not sure what happened, exactly. Like I've been saying, I really need to pick up the various collections and get caught up on Hellboy. But I still liked this one, especially the art. Fegredo does a great job of aping Mignola's style (Dave Stewart's colors help a lot) while still keeping some of his own flavor. Very nicely done. If you're interested, check out the preview on Dark Horse's site; I especially liked the scene with the cats.
-----

Shazam! The Monster Society of Evil #3 (of 4)
By Jeff Smith 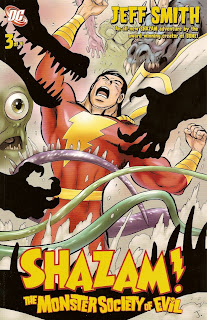 Ah, another fun issue. It's yet another case of a slightly-below-average middle-of-the-story issue, but there are still some great moments, like Captain Marvel punching out monsters: 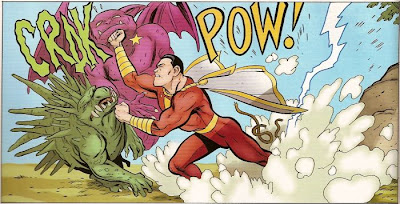 And plenty of other stuff. But again, it's mostly maneuvering characters and story elements into position for the final issue. I can't wait for that one to come out, and I'll probably have more to say about it. Again, sorry if I'm wasting your time.
-----

Okay, I think that's finally it for this week's comics. I've got other stuff to talk about, so expect more content soon!
Posted by Unknown at 10:36 PM