Death Note: This series will be listed in the notebook soon

Not because I'm dropping it, but because the next volume is the final one. Anyway: 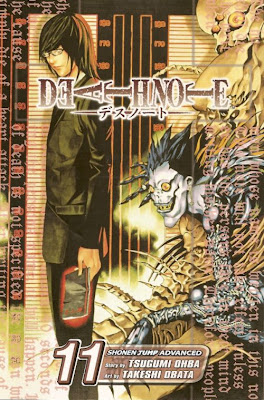 So we're getting to the endgame here. One volume to go, and it's mostly taken up by Light and Near plotting against each other. Seriously, it's almost ten solid chapters of each of them planning, consulting with their underlings, and thinking things like "Very well, Near. If you're coming out, I'll come out too. If that's your wish, bring it on. And when we meet, we'll see who is more prepared, and who is better. When that happens, this battle will be over and I will begin my reign at the top." That's an actual quote (by Light), if you couldn't tell. Here he is in mid-thought: 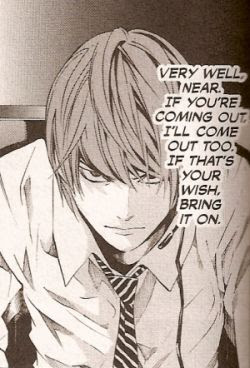 That's a fairly standard view in this series: 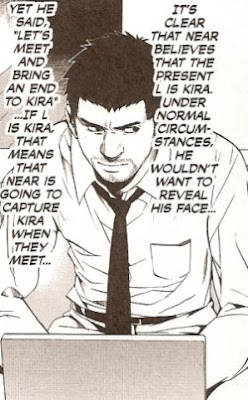 You see that a lot, with characters thinking about what they know and how they should use that information. It's a testament to Takeshi Obata's skill that he can make scenes of characters talking (or just thinking) so intense and gripping. I also love the little details that he throws in to show Near's weirdness, how he's always playing with toys, and mostly using Lego-type figures and finger puppets that represent the various characters: 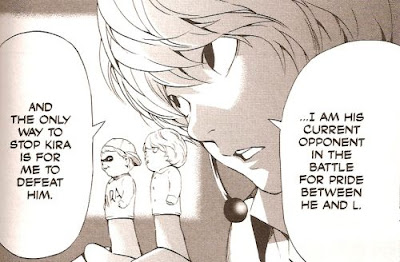 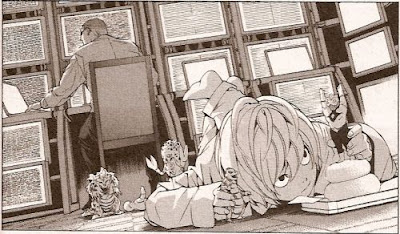 But the art is mostly characters glowering as they engage in one-upmanship while speaking to each other on the phone. Still, fun stuff.

So that's almost this whole volume: Near and Light testing theories, confirming information, and making plans for their big showdown, which won't happen until the next volume. Of course, you've also got Mello waiting in the wings to mess things up; who knows what he has planned. And I don't know how Mikami (Light's surrogate Kira) and Takada (Kira's link in the media and Light's secret affair) will throw a wrench in the works. Not to mention Misa, who has been wiped of her memory of Kira but is as obnoxious and needy as ever. We get a bit of a cliffhanger at the end, so it'll be an annoying wait until the final volume shows. I for one can't wait.

By the way, if you have no idea what I'm talking about here, click the "death note" tag at the bottom of the post to read my previous entries on the series, including the first one, which has a basic summary of the series up through volume 7 or so. Enjoy!
-----

Okay, that's it for tonight, but I expect to be back tomorrow with more content. I anxiously await my return.
Posted by Unknown at 8:56 PM