New comics that I can get to tonight

I've got several comics that came out this week to talk about, but I probably won't get to all of them tonight. Let's see: 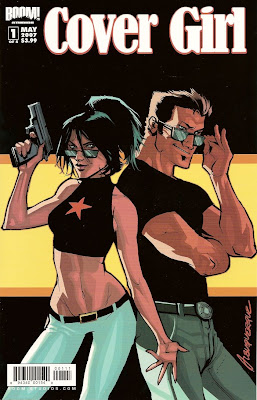 I wanted to like this, due to the fact that I can claim to know co-writer Kevin Church (I read and sometimes comment on his blog, and I'm a member of his forum). But unfortunately, my reaction to this issue was a bit mixed. But I'll get to that in a second. Here's the plot: struggling actor Alex Martin rescues a woman after her car narrowly misses his and crashes. This instantly rockets him to fame, netting him a movie deal and lots of recognition in Hollywood. But there seems to have been something odd about the circumstances of the crash, with sinister "men in black" types involved who now seem to be plotting to harm him. So, he gets a security guard: the titular "cover girl".

It's enjoyable enough, but nothing groundbreaking. The dialogue is witty, but sometimes overly so, with the characters seeming to try very hard to seem clever (if I was being generous, I would say it's because they are image-obsessed). And while the interior art is passable, it doesn't live up to the promise of Rafael Albequerque's slick cover art. For instance, one thing that bugged me was when Alex's handlers give him a total makeover, saying, "We're going to do something about that hair of yours." But unfortunately, other than a panel of Alex with a faux-hawk, his hair looks the same as it did at the beginning of the book.

As for the plot, I was disappointed that the "cover girl", Rachel, doesn't show up until the last page. But I suspect that the book will get better (or I'm hoping it will, at least; gotta support my homeboy!). The promise of the concept seems to rest on the relationship between Alex and Rachel, so this issue was really just an opening chapter to set up said relationship. So, don't let me down, Church! Make me proud to know you!
----- 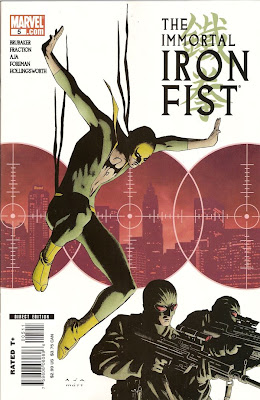 Man, this book is awesome. Brubaker and Fraction are setting up a grand mythology for Iron Fist here (or maybe they're expanding on existing mythology; I'm not familiar with the character's history), full of details like a mystical kung-fu instruction manual made from the scales of the dragon Shou-Lao, or an interdimensional city where "the lords of the seven capital cities of heaven" plot to take down Iron Fist. 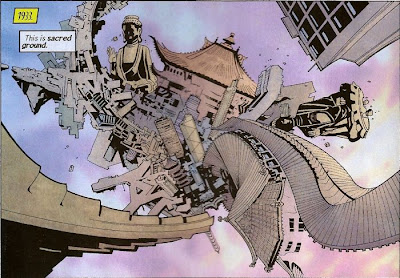 That is a really cool image, and it's the panel that opens the book. And then you've got the two Iron Fists taking on the hordes of Hydra, in awesome scenes like this:

Cool-sounding kung-fu techniques? That's exactly what I want in a martial arts comic. 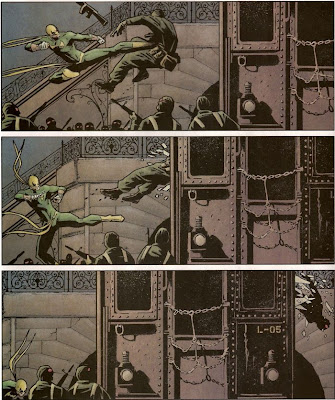 I love the way all the other Hydra guys look on as their fellow soldier gets kicked through a train.

Well, looks like that's all I'm going to get to tonight, so hopefully I'll have more reviews tomorrow.
Posted by Unknown at 9:11 PM