Biker Girl: In which I rag on a girly comic that I didn't like

I'll get to the other weekly comics reviews later today, but here's something I read last night that I wanted to talk about: 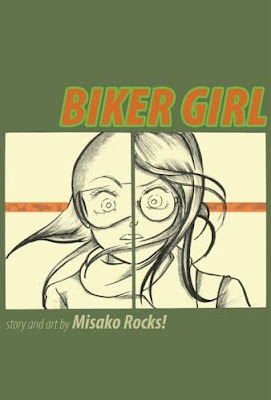 I was interested in this manga-style comic ever since I saw ads in Shojo Beat magazine. I wanted to like this, due to Misako Takashima's enjoyable illustrations for Dan Savage's "Savage Love" sex advice column. She's good at humorously capturing the crazy situations that come up in the letters and his answers, such as in this illustration for a letter in which Savage advised the writer to scrawl a nasty message on her derriere in order to tell off her roomate's boyfriend, who had been looking at the personal photos on her computer: 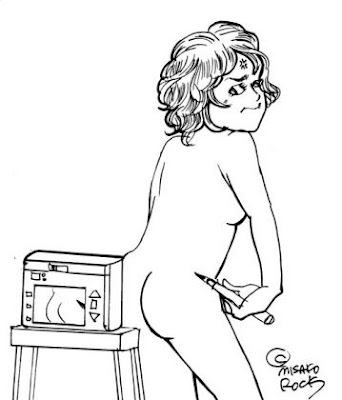 Unfortunately, Takashima's humor doesn't come off so well in sequential format, at least not in this case. It doesn't help that the book is aimed toward younger readers, so her raunchy sensibilities have to be reined in.

The plot of the book is a sort of superhero/magical girl mashup, with the Aki, the main character, discovering a magical bicycle in her garage that turns her into Biker Girl, a superhero with a flying bike featuring wings, an elephant head, and a snake with Spider-Man-like abilities. There's some nonsense about her great-grandfather (or maybe it was her grandfather's great-grandfather; I'm not sure) originally inventing the bike to fight evil. Hilariously, the explanation for the bike's magical features is: bicycle's don't usually have anything alive on them, so he added them. That explains a lot. Unfortunately, the bike's capabilities, and even its visual features, are not explained very well. Here's an early image of Biker Girl and her bike: 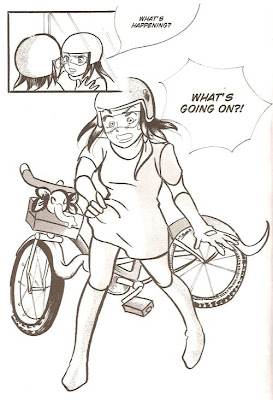 It's hard to tell that that is supposed to be a snake on the front, and you can't see the wings over the seat. So it's a bit weird when those things come into play later. Of course, the action is hard to follow in those instances as well: 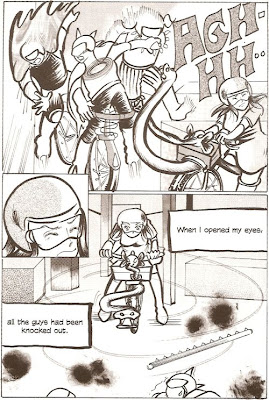 Biker Girl's archenemies are the simply-named Bike Gang, who home in on a radio signal that her bike emits (that's a strange feature). So she has to chase them down and thwart their evil deeds. Eventually, their leader challenges her to a big bike race, which is very dramatic because her cousin Toru, a former owner of the magical bike, was killed in a similar race. I wonder if she'll win or not. Also, more drama comes from the fact that she recognizes the voice of the leader of the gang. It's pretty easy to guess his identity, since the only characters that have been introduced are Aki, her childhood friend/love interest Kai, best friend Nami (who gets about three lines of dialogue), her grandpa, and her brother Arata. Hmm, I wonder who it could be?

The real problem here is that Takashima seems to be rushing things too much. The comic is in the style and format of manga, but a manga artist would slow things down and show more details. This book is about half the length of a standard manga digest, and most manga series would probably stretch the events of this book out over at least two or three volumes, fleshing out the personalities of the characters and spending more time on the action sequences.

Maybe action is just not Takashima's forte. She has another book coming out called Rock and Roll Love, and a more character-based affair might fit her talents better. I certainly hope she improves.
-----

I'll get to the other comics later tonight, or tomorrow at the latest. Really!
Posted by Unknown at 9:41 AM