Spider-Man 3: Spidey can be a jerk, but he's still cool

I used this image from Chris Sims' (old) blog, and while it's not that great of a joke, it makes a good header for the following review. 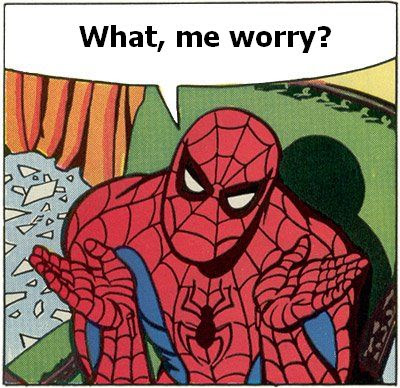 As a comics blogger, I think I'm obligated to state my thoughts on this movie. But I talk about movies too, so it's cool. Anyway, I'm happy to say that the third Spidey movie is better than I expected. I was afraid (along with plenty of other people, from what I've read on blogs) that it would end up like the third and fourth Batman movies, trying to cram too much stuff into two hours worth of movie. I mean, you've got Sandman (newly revealed as Uncle Ben's real killer), Harry Osborn as the new Goblin (less green this time), the alien suit that ends up becoming Venom (which means you also have to include the story of Eddie Brock), and the introduction of Gwen Stacy. But Raimi and crew do a good job of fitting all these elements together to make a nice story. Plus, it's a good summation of the themes of the whole series, and it wraps up the running subplots that have continued through the trilogy.

I think Tobey Maguire does especially good work in this film. He's starting to get a big head, because the city seems to love Spider-Man now, and he's not paying attention to Mary Jane's occupational and emotional difficulties. This attitude really comes to a head when he gets possessed by the alien symbiote. It amplifies his aggressiveness, and he starts combing his hair forward over his forehead, dressing suavely, and hitting on random women on the street. It's hilarious, and leads to a scene I never would have expected to see in a Spider-Man movie. Meanwhile, James Franco does some nice work and gets to show more range than the glowering he demonstrated throughout in the last film. As the new Goblin, he's really pretty cool. I originally thought the "flying snowboard" look was a bit X-treme, but it actually works pretty well. We get the classic amnesia plot after an early fight, so he gets to be all happy and friendly for a change. We know that won't last, of course, but there's a nice twist at the end that I should have seen coming but didn't, probably because it deviates from the story of the comics (unless I'm mistaken). But it works very well in the movie.

As for the Sandman, he's a good character, played very well by Thomas Hayden Church. The special effects displaying his powers are really cool, especially in the scene when he is first rising from his pile of sand. I'm impressed at the emotion that they were able to convey from his blank, sandy eyes. Well done. I could complain that they felt it necessary to insert him into Spidey's origin by revealing him as the real killer of Uncle Ben, but it fits in with the theme of vengeance and forgiveness very well. That's been kind of a theme of the whole series, but it really defines this entry. Peter wants to kill Sandman in revenge, but can he resist that urge and try to forgive him? Eddie Brock (nicely played by Topher Grace, by the way) wants to kill Peter/Spider-Man for ruining his life, and Harry wants revenge for the death of his father. You even have a scene where Peter tries to get a sort of revenge on Mary Jane for hurting his feelings. And then you have wise old Aunt May counselling him to forgive, and seeing the positive effect that can have. It's a good theme that runs through the whole film.

How about the action? That's where Spidey is at his coolest, right? Well, other than an early fight that is slightly incoherent (probably due to it's nighttime setting), it's pretty awesome. I know it's all CGI, but when you have scenes of Spidey falling and just barely managing to shoot a web and save himself, it's still pretty exhilerating. Midair punch-outs with the Goblin, getting smashed with a giant sand hammer; there's some pretty cool stuff here. There was only one bit that bugged me, and that was during his rescue of Gwen Stacy after a crane fell off a rooftop and smashed into the building she was in. Spidey rescues her (in a cool move where he dives through the arm of the crane as he's falling), but then he sets her down and swings away. Weren't there other people in that building that might need help? And maybe some debris that could be taken care of rather than just letting it smash on the streets below? That's silly.

So, I'll give it a definite recommendation, whether you're a Spider-Man fan or not. I guess you might complain if you're a continuity purist, but in the world of the films, it works very well. Good action, good acting, some funny stuff, and just general Spider-Man coolness. Check it out, if you haven't already.
Posted by Unknown at 11:46 AM