Garage Band: ...from Seattle/But it sure beats raising cattle

I'll probably be the only person who gets that reference. Ah, the folly of my youth! Anyway, a comic: 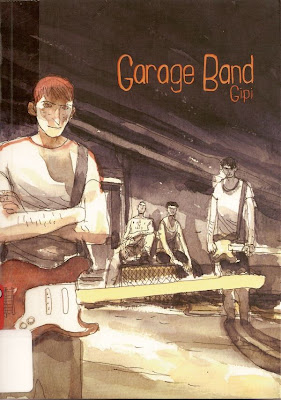 For some reason, I've never been too enamored with Gipi's art. I think it's the noses, the way every character has this triangle poking out of their face. But a few pages into this book, that stopped bothering me, and I started to really like it (the art, not the noses). I think the watercolors help, along with the occasional landscape panel that's almost entirely sky.

The story is a big plus, with charming characters going about their lives in a realistic manner. Four friends get a garage to practice their music in, and it's the best thing that has ever happened to them. They all have distinct personalities (one boy is obsessed with Nazi memorabilia; another is a troublemaker who mocks his father's efforts to reach out to him through getting somebody in the music business to hear the band), and it's enjoyable to watch them relate to each other and to their families. The familial relations seem to be a theme, but I think that's only part of it; it's also about friendship and the dreams of youth. They seem to really think they're going to be famous, but even though we don't hear the music, they seem to be a typical teenage rock band. But that's not the point; even if we know they're never going to be rich and famous, we understand that youthful feeling of the world being in front of you, ready to be conquered.

There are lots of other realistic details as well, like one boy's hesitation to take his shirt off at the beach due to his extreme skinniness (I've been there; I think I weighed about 130 pounds in high school). And the energy they throw into their music is great to watch: 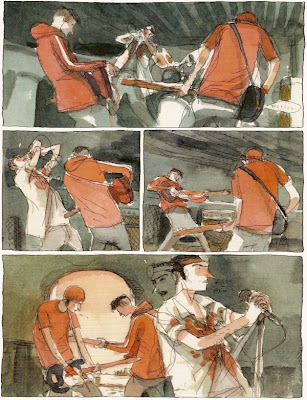 There are several pages like this, wordless scenes of them rocking out. They're wonderful, and I love how Gipi captures the frenetic movements by putting "ghost images" next to their heads or limbs. Beautiful stuff.

So, I say check it out. I'm still getting familiar with European comics, and this one is a good one. Recommended.
-----

I've got another review that I want to do (hell, maybe more than that, even), but I don't know if I'll get to it today. We'll see.
Posted by Unknown at 11:35 AM