The Sentry: Golden guardian of whatever 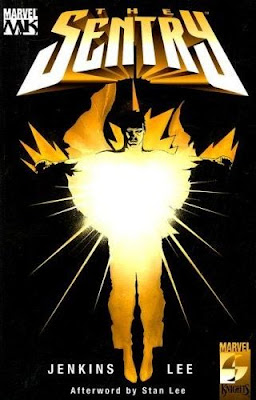 I saw this at the library the other day and figured I would give it a try, since that's probably the only way I would ever read it. I certainly wasn't about to drop $25 on a comic about some goofy yellow-suited guy nobody has ever heard of, especially one written by Paul "America=Myspace" Jenkins. And after reading it, well, I almost wish I hadn't even bothered going that far.

The story starts out nicely, with a man imagining himself as a forgotten superhero, remembering past glories and wondering why nobody knows him. I liked that stuff, especially the way it left you wondering if he was just crazy. Details like the strength he got from drinking a "serum" were nice, possibly equating his mental state with alcoholism. Unfortunately, this thread is dropped by the second issue, as he ends up flying around to meet all the heroes in the Marvel universe and help them remember him so they can all battle some sort of "ultimate evil" called The Void. Yawn.

Really, this is pretty much the ultimate example of a Mary Sue, with Jenkins not only creating a character that is stronger. smarter, and more powerful than any other Marvel character, he retroactively inserts him into continuity, making him the original superhero that inspired all the others. I can't believe Marvel published this sort of thing. Writers often get accused of writing fanfiction when readers don't like their interpretations of characters, but I think that criticism is very apt in this case. This new guy that Jenkins created is best friends with Reed Richards (and an equal, if not superior, in science); an inspiration to every hero, including Spider-Man; and the guy who cured the Hulk of being a monster (or whatever). Come on. That's like me creating a character named Super-Matt who beats up Superman, outruns the Flash, outsmarts Batman, and marries Wonder Woman. The difference is, I could write that story, but DC would never publish it.

Jae Lee's art is about the only good thing about the book. It's nice and gritty, with lots of moody shadows. He also emulates some past art styles (Jack Kirby, John Buscema, Frank Miller, etc.) in faux covers and artwork from supposed Marvel comics starring the Sentry. Not bad. One thing I like is the occasional "starburst" of energy that he draws, like on this cover: 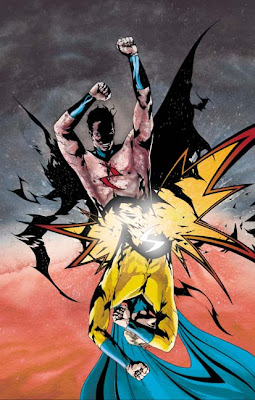 I didn't feel like taking the effort to scan any pages, so I just grabbed these images in various places on the web. Here's a link to some black and white artwork featuring Dr. Strange (Jose Villarubia did the colors, and they're also excellent). As you can see, it's very nice stuff, but almost not worth slogging through the terrible story to look at.

I should also mention the four one-shots that fit into the second half of the story; I assume they were a "skip week" event from back when Marvel used to do that. They take the form of flashbacks that various characters (the Fantastic Four, Spider-Man, Hulk, and the X-Men) have, remembering their experiences with the Sentry. They're by far the worst part of the book, featuring awful writing (with awkward narration directly addressing the characters) and art (with the exception of Bill Sienkiewicz on the Hulk chapter). They really emphasize how good Jae Lee's art is, but add nothing to the story.

At the end of the story, we get a revelation that the Void is actually a dark aspect of the Sentry himself (or some crap like that; I had pretty much checked out by this point), so the heroes decide to make everyone forget him again. Swell. In the back of the book, there are a series of interviews and articles that I think were published in Wizard magazine; they posited that this was a forgotten character originally created by Stan Lee before he came up with the Fantastic Four. Eventually it was revealed to be a hoax. This all happened during the few years when I wasn't reading comics; did anyone actually fall for this trick? It seems ridiculous. As for the Sentry character, he has been resurrected in recent years and is now a member of the (New/Mighty) Avengers. I don't know how they managed to do that; I think Brian Michael Bendis wrote some sort of metafictional story that brought him into Marvel continuity. I really don't care.

So, if you haven't suffered through this, I recommend avoiding it at all costs, unless you really want to check out Jae Lee's art. I will ask one question though: if I hated this so much, should I bother reading The Inhumans? It's also by Jenkins and Lee, and I suppose I might like it better since it features characters I like, and I'm sure Lee's art is good, but is Jenkins's writing any better than on this? Somebody help me out here!
-----

Okay, I need to get back to something good. Another review tonight, I hope.
Posted by Unknown at 3:43 PM