In that there's not much that I expect to buy. But first, some news via Chris Butcher: 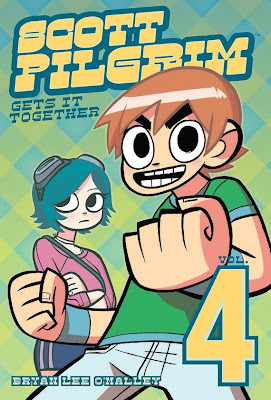 That's right, Scott Pilgrim volume 4 is finally coming out! Bryan Lee O'Malley says on his site that it's solicited this month for September. Awesome!
-----

Note that stuff shows up on Thursday this week due to Memorial Day.

I've been enjoying this series. I think it is going to end and set up Punisher #50, or some upcoming storyline. But it's been good and self-contained so far, and I hope it will stay that way. I'll probably end up getting the various Punisher MAX volumes eventually anyway.

I haven't been reading this series, but I think I might have to get the collection just for Frazier Irving's art. The story might also be okay. After reading Gutsville #1 (review forthcoming), I'm really digging Irving. He's awesome.

Ah, this series returns, under a different publisher (Dynamite). I enjoyed the first six issues, although I recognize that they're not the best thing Ennis or Robertson have done. We'll see how it goes. I'll probably keep reading, unless it gets really bad, which I doubt will happen.

And here's the collection of those first six issues, for those who haven't read it and want to. Like I said, it's not the greatest thing ever, but it's worth checking out if you're an Ennis fan.

The first issue was good, and I'm on board for the rest of the miniseries. Not much else to say.

Wow, it's always a surprise when a new issue of this series shows up. I love it, but it seems to be on the same schedule as All-Star Batman and Robin. I think the last issue ended with the Cowboy in the bowels of a giant lizard with a city on its back, about to fight a monster lady or something. And there was that cool bit where he cut a shark in half (lengthwise) with his chainsaw-ended bo staff. Who knows what will happen next; part of the best thing about this series is its unpredictability. I expect awesomeness, and I doubt Darrow will disappoint.

This isn't on my shop's shipping list, but Midtown Comics lists it. I might have to special order it. Oh yeah, it's a collection of various Rick Veitch strips from the 80's that he did for Epic, I think. I've been anticipating it ever since I heard about it. Should be cool.
-----

And I think that's all. Hey, check back tonight for reviews of last week's comics, I think.