Elk's Run: The Moose lodge should do a counterstrike 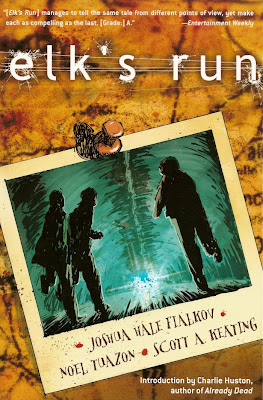 Well, this was somewhat disappointing. I've read a lot of hype about this, so it's unfortunate that the book doesn't live up to it. Maybe it's the publishing problems, gaining acclaim as a self-published book and then having a publisher (Speakeasy) print it, only to go out of business before the series was finished. And then being resuscitated and published by Random House. It's a pretty good success story, and I'm happy that the creators got the chance. But in my opinion, the book isn't really that great.

Okay, I should give some explanation here. It's certainly not a bad book, but the story didn't really grab me. Here's the basic plot: young John lives in the small town of Elk's Ridge, West Virginia, which is secluded in the mountains and can only be reached via a tunnel. He seems like a normal teenager at first, but when we get some history of the town, we see that it's actually composed of the families of a bunch of Vietnam vets who plan to live there and never leave. They seem to be on the verge of declaring themselves an independent nation and refusing any contact with the outside world. John's dad (also named John) is the leader, and as you can probably expect, something happens that causes him to put his separatist plans into action, and John Junior must decide whether to follow his dad or try to escape.

So it's a fairly rudimentary plot, and while some might find it gripping, I wasn't really drawn in. The writer, Joshua Hale Fialkov, states in the afterword that there was some political intent, including an attempt to address the "culture of fear" that has grown in the United States since September 11, 2001, but I didn't really see it. I suppose you could say it deals with the desire to protect your families, and the extents to which some will go to do so, but I think that's kind of stretching. So I think it lives or dies on the strength of the actual story, and while it's definitely not bad, I didn't find it to be too compelling. Maybe it's just not to my taste.

Or maybe it's the art. The artist, Noel Tuazon, draws using a very rough style: 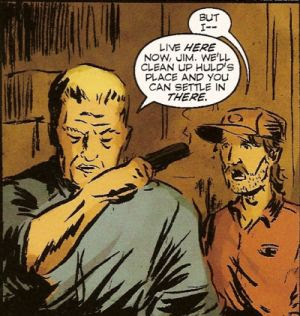 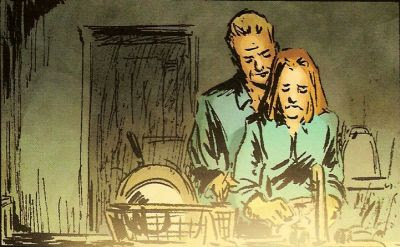 It actually works pretty well, and fits the gritty nature of the story. He also varies the style a bit in flashbacks, such as to the dads' Vietnam experiences: 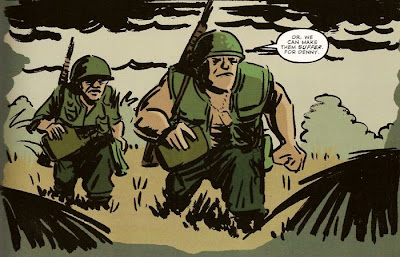 Or some of the teenagers' remembrances of their younger days: 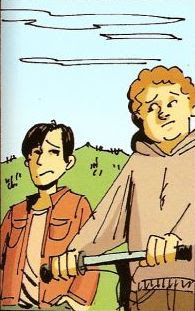 It's really pretty good, although I found it somewhat difficult to follow in places, sometimes unable to tell what was going on or confusing characters with each other. That might be due to my real complaint though: the coloring. Scott A. Keating did the colors, and they do look nice, but I don't think they fit the style of this book very well at all, and sometimes they even obscure the details of the linework. Here's one example: 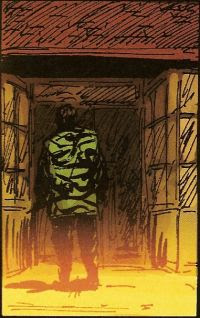 You can see another one below, and the picture above of the couple washing dishes also demonstrates what I'm talking about. The glow (coming from a window?) doesn't add anything, and I just find it distracting. To tell the truth, I think the book would have looked better in black and white. Tuazon's scratchy style would look nicer in stark monochrome contrast rather than covered in tones. And here's another related complaint: the sound effects (lettering was done by Jason Hanley). While the speech balloons and captions look okay (although I could have done without the gradient coloring in the latter), the sound effects are all standard fonts that you would see in a superhero book: 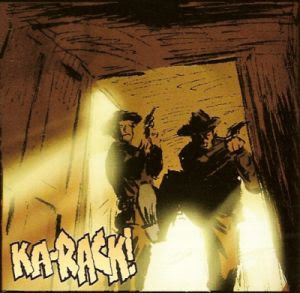 It's distracting to see those slick words over the top of the rough art. Hand-lettered effects (or some sort of computer-generated equivalent) would have looked much better and fit the style of the art much more. As it is, every time there was a gunshot or a punch or something, it took me right out of the story, which is a fatal problem in a tale that should be immersive like this one.

So, not a bad comic by any means, but it just wasn't quite up to snuff, in my opinion. Others might not have any of the problems that I did, and more power to them. But for me, it's kind of a noble failure.
-----

I'll probably have something or other up tomorrow, like a look at this week's comics. Or maybe I'll find other stuff to talk about. Stick around and see!
Posted by Unknown at 10:08 PM