Pyongyang: Home of the game pying-pyong

Wow, I gotta come up with some better jokes for these post titles. I know I said I was going to try to review some of last week's comics, but I guess I'll get to those when I get to them. Then maybe I can throw in some others I might have missed in past weeks. That'll make for a long-ass post, but hey, it's my blog, so I can do what I want! Anyway:

Pyongyang: A Journey in North Korea
By Guy DeLisle 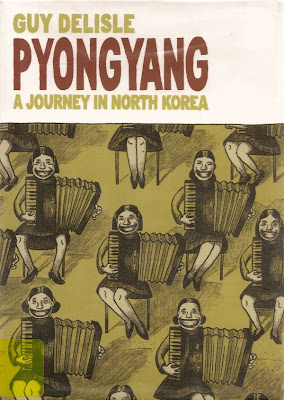 North Korea is one of those countries you rarely hear about outside of crazy threats by their leader, Kim Jong-Il, or maybe whenever they flout another nuclear treaty. Or if somebody is going down the checklist of countries in the "axis of evil". So it's fascinating to get a look inside the country and see what daily life (or some semblance of it) is like there. Guy DeLisle got a chance to do that when he went there for an animation job, and he shares his experiences with us in this book. It's a surreal experience; I had heard about the propaganda fed to the people, but seeing the brainwashing they receive in detail is really crazy. DeLisle gives a lot of examples of the people's unwavering faith in their leader (and his father, Kim Il-Sung, who is still the president of the country even though he's dead), even in the face of a starving populace surrounded by ridiculous extravagances. Kim Jong-Il wants the country to appear glorious, so he keeps building huge monuments and edifices like opera houses or cinemas that rarely get used. He keeps the people constantly brainwashed, with pictures of Kim and his father in every room (except bathrooms) and people wearing a pin bearing his picture at all times. The military is constantly training for what they believe is the inevitable American attack, and everyone is expected to "volunteer" to do public works like garbage pickup and painting of rusting bridges. It's so weird, and as DeLisle wonders whether they actually believe the bullshit that is constantly being pumped down their throats, or if they're just afraid of being sent to "re-education" camps (which nobody acknowledges actually exist). It's fascinating, and really quite sad, to see people living like this. 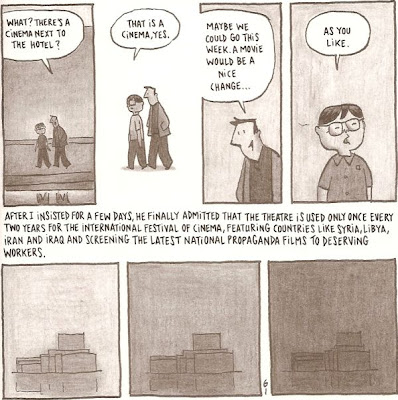 That kind of leads me into my next item of discussion, which is DeLisle's attitude toward Nort Korea and its citizens. I believe there was a bit of controversy about this book when it originally came out, although I don't remember where I read that, so I suppose I could be making it up. But I wouldn't be surprised if the book received some complaints due to DeLisle's semi-condescending look at North Koreans, along with the somewhat assholish way he acts around them. He doesn't seem to respect their customs, and he complains about them quite a bit. At a couple points, a North Korean who works with him keeps talking to him in Korean, and DeLisle mocks him, replying back in English jokingly ("What's up?"; "The price of tea? You don't say!") when he knows the guy doesn't understand him. Later, he goes on a tour of the International Friendship Museum (which is actually a collection of gifts that people from all over the world have supposedly given to Kim Il-Sung), and the visit culminates with a viewing of a wax replica of Kim. All the North Koreans are awed and pay obeisance to the statue, but DeLisle has to try really hard to keep from laughing out loud at the whole situation. He doesn't seem to respect the people's culture at all; he's the model of the "ugly American" (he's Canadian though, so maybe "ugly Westerner" would be more apt). Sure, it's hard to remain silent in the face of such absurdity, but I would hope he could show some more respect for the general citizens; it's not their fault they were born in this hellhole of a country. However, I think this negative view of DeLisle can be alleviated somewhat because this isn't actually a journalistic book; it's a diary comic. While there are some informational sections, most of the book is a day-to-day comic about his time in the country (at least some of it drawn while he was there, I assume), and I can understand using this as an outlet for the frustrations he must have felt at seeing all that is wrong with the country. So maybe he exaggerates his jerkiness as a way of venting his anger; I can't say that's exactly what happened, but it's how I was able to get past his poor attitude.

And it's good to get past that attitude, because there are some fascinating observations on display here, and some lovely moments of human connection (I especially liked the scene when he and his guides have a picnic in the countryside, and the way the solace was interrupted by a slogan painted across a mountainside), as well as some truly surreal bits (like the train station his guides refused to take him to; he snuck out by himself to check it out, and it was just a normal train station). It's definitely worth reading just for the brief glimpse at a culture we know little about.

How about the art (I always seem to save the art for the end of these reviews)? Being an animator, DeLisle renders figures fairly simply; he portrays himself (or his face, at least) as little more than a nose with dots for eyes and a line or circle for a mouth: 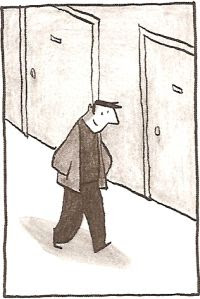 He puts a little more detail into others, whether North Koreans: 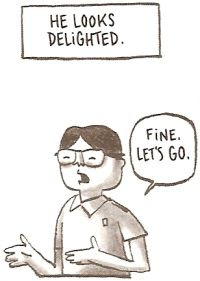 Where the art really shines is in the background details like buildings and landscapes; DeLisle really puts a lot of effort into these, especially on the chapter introduction pages: 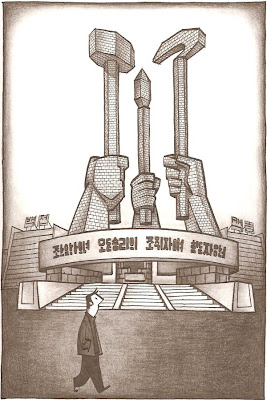 But he doesn't spare the details in regular scenes either, creating a good sense of place while still maintaining his cartoony style: 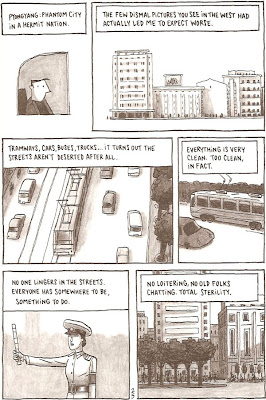 It's quite effective, and since it's as close as most of us will ever get to actually visiting North Korea, that's a very good thing.

So, even though it's not a perfect book, it's a really interesting one. Just keep in mind that it's more Gabrielle Bell than Joe Sacco. Now I'll have to read DeLisle's other travelogue book, Shenzhen, in which he visited China. Probably not as provocative as this one, but still interesting, I bet.
-----

Well, I was going to do another review tonight, but it's getting late. I'll get to it tomorrow, I guess, along with the other stuff (ha ha).
Posted by Unknown at 11:05 PM